Consider two balls, one with a mass of 1 kg and the other with a mass of 10 kg. Which ball would experience a greater change in motion if kicked with the same force? Clearly, the smaller ball would experience a greater change in motion. An object's state of motion can be described as its velocity, where velocity is the speed of an object with respect to its direction. Objects at rest - for example, the balls you see on the screen - have zero velocity. Once kicked, the ball's state of motion changes. In other words, its velocity changes. When an object changes its velocity, it has what we call acceleration. Newton's second law of motion provides the explanation for the behavior of objects when forces are applied. The law states that external forces cause objects to accelerate, and the amount of acceleration is directly proportional to the net force acting on the objects and inversely proportional to the mass of the objects. 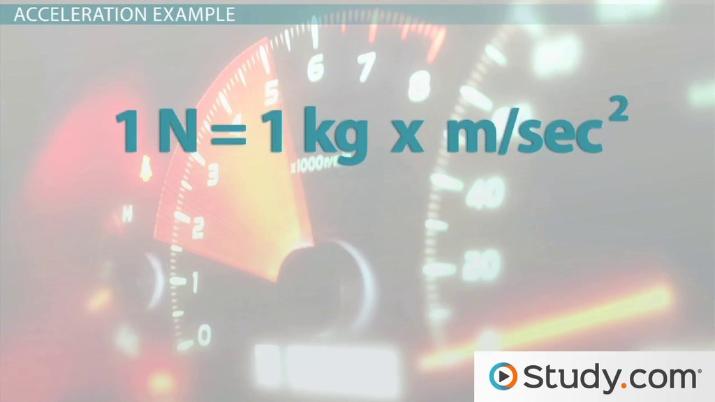 Coming up next: Newton's Third Law of Motion: Examples of the Relationship Between Two Forces

What is Net Force?

Notice that Newton's second law states that the amount of acceleration is directly proportional to the net force acting on the object. What is the net force and how do we calculate it? Net force is the sum of all forces acting on an object in a particular direction. Since forces have direction, they are vector quantities. Vector quantities are fully described with both magnitude and direction and are represented with arrows. Consider an object being pushed to the left with 10 Newtons of force and to the right with 5 Newtons of force. The net force = 5 N to the left as 10 N - 5 N = 5 N. The forces are subtracted from each other since they are pointing in opposite directions. The forces would be added to each other if they were pointing in the same direction. Once the net force is determined, the acceleration of the object can be determined.

How to Calculate for Acceleration

Acceleration is a change in velocity. As long as we know the mass of the object and the net force acting on the object, we can determine acceleration. Let's look at the formula:

Let's look at an example. Consider a 10 kg object forced to the left with 10 Newtons and to the right with 20 Newtosn. What is the acceleration of this object?

Let's recall the formula for acceleration. a = f (net) / m

Let's first calculate the net force. As the forces are acting in opposite directions, we subtract them.

Now, plug net force into the equation with mass to calculate for acceleration.

A Newton of force equals 1 kg * m/sec^2. 1 N = 1 kg * m/sec^2. If we substitute this value of a Newton into the equation, mass (kg) is cancelled out, and that leaves us with the units m/sec^2. Those are the units for acceleration.

Therefore the acceleration of our object is, a = 1 m/sec^2.

How to Calculate for Force

If we know the mass and acceleration of an object, we can calculate for force. Simply rearrange the equation to solve for force. So, as you see on the screen, f (net) = m * a.

Consider again our 10 kg object, now moving to the west with an acceleration of 10 m/sec^2. What is the net force acting on this object?

Therefore, our object is pushed to the west with a net force of 100 N.

Newton's second law implies that acceleration occurs only in the presence of an unbalanced force. If the forces acting on an object are balanced, the object is in a constant state of motion. That is, it is not accelerating. This is true for objects at rest as well as objects moving with a constant velocity. For example, a parked car has a net force of zero. The forces are balanced as the force of gravity pulling down is cancelled out by the force of the ground pushing up on the parked car. Likewise, a car moving with a constant velocity of 65 MPH is experiencing balanced forces as well. If an unbalanced force is applied, the car will accelerate. If you apply the brakes, the car will slow down - that is, experience negative acceleration. If you apply the gas, the car will increase its velocity - that is, experience positive acceleration.

Newton's second law of motion provides an explanation for the behavior of objects when forces are applied to the objects. The law states that external forces cause objects to accelerate, and the amount of acceleration is directly proportional to the net force and inversely proportional to the mass of the object. Net force is the sum total of all forces acting on an object in a particular direction. Forces acting in the same direction can be added together while forces acting in opposite directions are subtracted from each other to determine the net force. Acceleration is a change in velocity. The formula for calculating acceleration is as follows: a = f (net) / m, where a = acceleration, f (net) = the net force acting on the object, m = the mass of the object. Force can be calculated by simply rearranging the formula to solve for force, as you can see on the screen, f (net) = m * a. If all the forces acting on an object are balanced - that is, the net force is zero - the object does not accelerate. If an unbalanced force is applied, then the object will accelerate.