Newton's second law of motion states that the acceleration of an object is dependent on the force applied to its mass. Learn about Newton's second law, explore the eight steps for testing it in a physics lab, and discover some of the conclusions that can be drawn from the law. Updated: 11/03/2021
Create an account

The basic idea is that if you apply more force to an object, it will accelerate more. But that acceleration will be smaller if the object has a larger mass. Today we're going to try to confirm this equation using an experiment. Experiments are always limited by how accurate we can be with our measurements, and other factors, like friction, but if we're very careful, it's possible to check if the equation is at least approximately correct. Time to investigate! 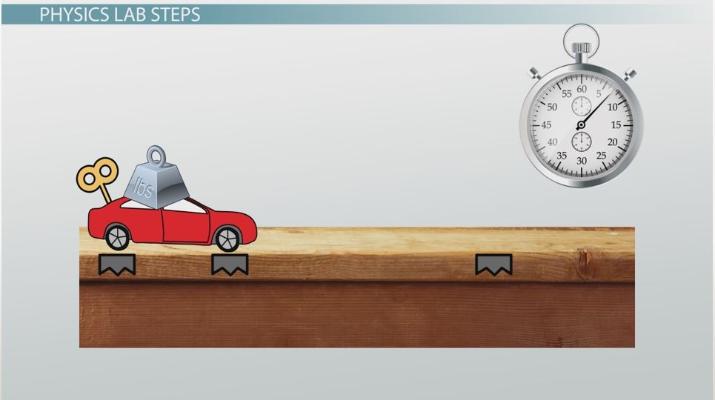 Try it now
Back
Coming up next: The Effect of Friction on Accelerating Objects: Physics Lab

For this physics lab, you will need:

Step 1: Mark a starting position on your surface for the toy car, using the duct tape. For best results, mark the position of at least two of the wheels.

Step 3: Without any weight, get an assistant to wind up and release the toy car in position.

Step 5: Note down the time you recorded on your stopwatch and repeat at least five times.

Step 6: Add the next smallest weight to the back of the car. You may need to tape it down using the duct tape, but if you do, make sure to measure the mass of the duct tape when you're done taking data.

Step 7: Repeat your five measurements with each of the weights.

Step 8: Weigh your car, and any duct tape, so that you know the total weight of the car during all your time measurements.

You should create a data table. Your measurements are the distance you marked along the ground in meters, the mass of the car in kilograms (including the car, all weights, and duct tape), and the time measurements you took in seconds. You can then create an average of each set of five trials by adding them up and dividing by five. Once you have your data, it's time to do some calculations.

Plot a graph of average speed against mass. The axes should look something like this:

Make sure your axes are continuous, meaning that if your masses were not evenly spaced (for example, 1 kilogram, 2.2 kilograms, 8.1 kilograms), the plotted points should not be evenly spaced on the graph either.

At this point, if you haven't already, you should pause the video to complete the experiment and analyze your data. Next, we will talk about the expected results.

What does your graph show? It should show that as you increased the mass, the average speed decreased. Why is that?

Well, the wind up mechanism in the toy car applied the same force to the car each time. But because you kept increasing the mass of the car, the acceleration decreased. According to Newton's 2nd Law, Fnet = ma. So if the net force is constant, and the mass increases, the acceleration has to decrease to compensate.

One thing that makes this experiment problematic is that because of friction, Fnet actually was changing. As you increase the mass, you increase friction a little, and that decreases the net force. But this will only accentuate the effect on your graph. The fact that the object is rolling on wheels also helps reduce the problem, because rolling friction is relatively small.

In this lesson, we completed an experiment where the mass of a wind-up car was gradually increased. As we increased the mass of the car, the car's average speed was less - it accelerated less. This is because, according to Fnet = ma, if the net force remains the same (the car's wind-up mechanism is the same) and you increase the mass, m, the acceleration, a, must decrease to compensate. This is Newton's 2nd Law in action.

Energy Conversions & Examples | How Many Forms of Energy are There?

Energy Conversions & Examples | How Many Forms of Energy are There?