A nomadic lifestyle involves traveling to different places periodically and not staying or living at a permanent location. Take a look at the definition and explanation of a nomadic lifestyle, and discover the regions where families of nomads have been common across centuries. Updated: 09/01/2021
Create an account

We take many things for granted in modern America. Nearly all Americans have a home of some sort; be it a studio apartment or a mansion, most of us go back to the same place at the end of each day. However, this is not true for all of the world's population today, and it certainly was not true for our earliest ancestors. There are still tribes in the Eurasian steppe, Africa, and even Europe who live as our ancestors did: as nomads.

The nomadic lifestyle is likely the oldest form of human society still practiced today. Generally, nomads are people and tribes who do not consider themselves attached to a specific plot of land. Though nomadic societies have their own laws and customs, they do not practice and have little knowledge of Western property rights. Nomadic civilizations move from place to place and region to region depending on variables such as climate, season, availability of water, and the movement of animal herds. In order to better understand nomadism, let's take a look at some examples throughout history and some examples from today. 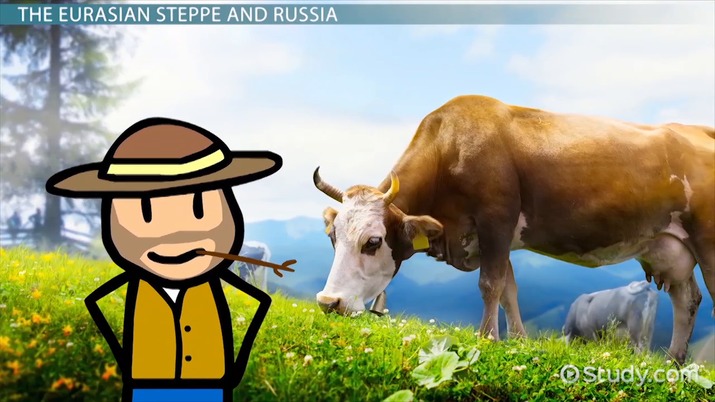 The indigenous civilizations of the Plains region of North America consisted of dozens of nomadic tribes and cultures. Prior to the arrival of European settlers in the 18th and 19th centuries, the Plains cultures followed the great herds of American buffalo which fed on the grasslands that covered the region. These peoples never erected permanent dwellings, preferring to live either in makeshift huts erected from grass and mud, or the hide and wood 'tipis' often seen in common representations of Plains cultures.

The Eurasian Steppe and Russia

Tribes and families of nomads are still commonplace today in the Eurasian steppe - an enormous region of flat grasslands similar to the North American plains.

Families in the steppe often move from place to place according to temperature and availability of grassland. They live in often circular tents made from hide and timber, called 'yurts.' The tribes of the steppe differ from the cultures of the Plains, as they practice some modest animal husbandry. Most families have at least a few domesticated animals - some may even have entire herds - to provide them with milk, eggs, and meat. Indeed, steppe people often move from region to region in order to find adequate vegetation for cattle to graze.

Nomadism is an important practice to understand because historians and archaeologists believe that nomadic hunting societies like those of the American Plains were the earliest forms of human civilization. Mankind's earliest ancestors travelled great distances following herds of animals and attempting to domesticate their own; had they not succeeded, modern human culture, from the nomadic pastoralism in southern Siberia to North America, may not have been possible.

Let's review. The nomadic lifestyle is the oldest form of human society still practiced today, and the nomads who live this lifestyle are people and tribes who do not consider themselves attached to a specific plot of land. Two major areas have a long history with the nomadic lifestyle; they include both the North American plains and the Eurasian steppe. The North American plains were populated by nomadic groups known as the Plains Indians, whose movement was centered around the movement of the American buffalo.

The Eurasian steppe - which still has nomadic cultures living on it today - had and still has very similar nomadic cultures to the Plains Indians, but with one major exception: The steppe peoples have domesticated some animals, like cattle, horses, and camels. Both cultures also have distinct yet similar living conditions: The Plains Indians lived in small huts mud or tipis, while the steppe peoples lived and live in circular tents made from hide and timber called yurts.

Nomad Types, Facts & Examples | What is a Nomad?

Chiefdom Overview, Privileges & Functions | What is a Chiefdom?

Role Set Overview, Analysis & Examples | What is a Role Set?

The Fertile Crescent: Cradle of Civilization

Visual Cliff Experiment & Depth Perception | What is the Visual Cliff?

What Does Taboo Mean? Examples