Abnormal skin growths are known as skin lesions, manifesting in dozens of different ways, and are organized into primary (disease) and secondary (external damage). Explore the layers of the skin, and learn the names and appearance of several common skin lesions. Updated: 11/03/2021
Create an account

What Are Primary & Secondary Skin Lesions?

I'm sure you remember that revolutionary moment in your health science class when you learned the answer to this question - 'What is the largest organ?' The skin, that's right! Some of the wonder may have rubbed off by now, but the skin is truly an amazing, living organ. And it is busy! Constantly renewing itself and repairing damages.

Unfortunately, there are some things the skin cannot repair completely; otherwise, we'd all be walking around with baby smooth skin and the cosmetics industry would be out of business! Any abnormal growth or area of skin that differs from the skin around it is termed a skin lesion, often referred to by medical professionals as 'a lesion' for short.

There are many types of skin lesions found in hundreds of varying skin ailments. However, all skin lesions can be divided roughly into two categories: primary and secondary. Primary skin lesions are those lesions which are the direct result of a disease. These include macules, papules, nodules, plaques, vesicles, bullae, pustules, and wheals. Secondary skin lesions are those lesions that result from an outside force affecting the skin, such as scratching, or an evolutionary change in a primary lesion. Some of which include scale, crust, atrophy, erosion, ulceration, lichenification, fissure, laceration, and purpura.

The distinction between the two categories is not always clear. However, if an individual is able to appropriately label a skin lesion, then he is already halfway towards making the appropriate diagnosis. This is the power of terminology! 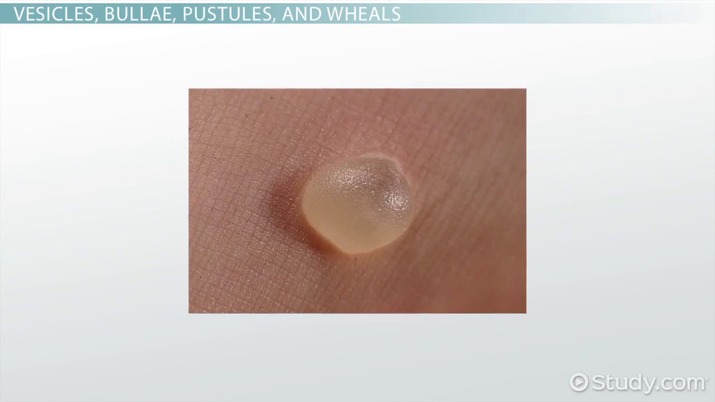 Coming up next: Nomenclature of Skin Lesions: Secondary Lesions

Layers of the Skin

We are going to tackle primary skin lesions in this lesson. But before we do, let's quickly review the layers that make up the skin, as many of the definitions are based upon this information. The top most layer, represented by numbers one and two, is termed the epidermis. The next layer, labeled three, represents the dermis; and finally, at the base, labeled four, is the subcutaneous tissue.

We'll begin with some of the most common primary lesions: macules, papules, nodules, and plaques. A macule refers to a flat, clearly-defined lesion that is different in color from the surrounding skin, measuring less than one centimeter in diameter. If you closed your eyes and gently ran the pad of your finger over the affected skin, you would not know there was an abnormality. So, a freckle, for example, is a macule.

A papule, on the other hand, is a clearly-defined, solid lesion that is raised, measuring less than one centimeter in diameter. The 'bump' on this person's nose would be referred to as a papule:

So, a macule is a papule's cousin in a way. Both are small in size and clearly defined, but a macule is completely flat. A helpful way to remember this difference is that a lesion that got run over by a Mack truck would be completely flat, and thus it is a macule!

Now, it's time to meet papule's big brother, the nodule. A nodule is a solid, firm lesion, measuring more than one centimeter in diameter, which may be located in the epidermis, dermis, or subcutaneous tissue of the skin. So, again, a papule and a nodule are similar in that they are solid, firm lesions, but a nodule is larger. Furthermore, a nodule is not necessarily on the surface layer of the skin like a papule but may be deeper inside the tissue. For example, this woman has a nodule on her thyroid:

In order to feel the nodule, you would need to press down gently on the skin.

A plaque is a well-defined, raised, solid lesion that has a flat top and measures over one centimeter in diameter. In the land of skin topography, a plaque would be analogous to a plateau. Plaques are most commonly found in pathological conditions of the skin, such as eczema or psoriasis.

Next, we'll discuss vesicles, bullae, pustules, and wheals. And believe it or not, most of these lesions you've probably experienced yourself! A vesicle is a raised lesion, measuring less than one centimeter in diameter on the surface of the skin, filled with a clear fluid. 'Clear' in medical jargon is 'serous,' so you may hear this in some definitions. Does this sound familiar? Well, if you've ever had a blister on the back of your heel, then you've had a vesicle. And although most children are immunized against it these days, chicken pox is another example of vesicles forming on the skin.

A bulla (plural bullae) is a raised lesion, measuring more than one centimeter, filled with clear fluid. In other words, it's a vesicle's big sister. These can happen sometimes with allergic skin rashes, such as poison ivy or following a severe sunburn, you may develop blisters that are really large. These would be termed bullae.

A pustule is a raised lesion, measuring less than one centimeter on the surface of the skin, filled with pus. Can you guess which example I'm going to give? That's right! A pimple is a perfect example of a pustule. And even newborns experience acne. As you can see in this photo, the baby has a cluster of pustules on the left cheek:

One final type of lesion limited to the skin is a wheal. A wheal is an elevated patch of skin, confined to the upper epidermis, usually with a reddish border and a pale center. Again, just so you are aware, in medical terminology, redness on the skin is usually referred to as 'erythema,' and when used as an adjective, 'erythematous.' Therefore, a wheal may be described as having an erythematous border. The layman term for a wheal is a 'hive.' And if you've ever had a mosquito bite, then you've witnessed the formation of a wheal first hand.

The next three types of growths that we will discuss are not necessarily limited to the skin but rather can occur in any part of the body - muscles, organs, or bones. A tumor is an abnormal growth of tissue occurring in the body, usually measuring more than two centimeters in diameter. It is important to note that when people hear 'tumor,' they automatically think of a dangerous, malignant growth, but some tumors are benign, meaning they are harmless.

A cyst is a sac that is filled with air or serous fluid, occurring anywhere in the body. Most cysts are benign, but some have the potential to evolve into dangerous growths. The major difference between a tumor and a cyst is that a tumor is an overgrowth of tissue - see how it appears opaque, whereas a cyst is more like a balloon filled with either air or fluid.

Finally, an abscess is a collection of pus in the body, usually surrounded by inflamed tissue. Again, an abscess can occur anywhere - in the skin, in the brain, in teeth. If it occurs in the skin, like with a localized MRSA infection, it is commonly referred to as a boil. Naturally, abscesses occurring on the skin are more easily observed and treated than abscesses within organs or body cavities.

And so, we have covered all the types of primary lesions found on the skin, including macule, papule, nodule, vesicle, bulla, pustule, wheal, and plaque.

A wheal is a raised lesion on the surface of the skin, which has an erythematous border and pale center. A plaque is a clearly-defined, raised lesion with a flat top, usually larger than one centimeter.

We have also learned about a few types of lesions that occur on the skin and in other parts of the body: tumor, cyst, and abscess. A tumor is an abnormal growth of tissue. A cyst is a sac, which may be filled with air or serous fluid. An abscess is a collection of pus, usually surrounded by inflamed tissues.

Now, if presented with a growth on the skin, you'll be able to accurately label it! This enables you to have a marked advantage in diagnosing the problem. You will never find a 'bump' in a medical definition, but a papule will surely be there. Move forward in the confidence that any abnormality of the skin will be encompassed by one or more of the terms you have just mastered.

Which of type of skin lesion is most often found only in skin disorders such as eczema or psoriasis?

What Is a Skin Wheal? - Definition, Formation & Treatment

How to Elicit a Patient's Health History

What is Chloasma? | Treatment for Facial Chloasma & Chloasma During Pregnancy

Can a Heart Murmur Cause a Heart Attack?

What Is Leprosy? - History, Signs & Treatment

Terminology for the Levels of Consciousness