What Is Non-Renewable Energy?

Did you ever watch a sailboat moving through the water? Wind powers sailboats; as long as the wind blows the sailboat goes. We never run out of wind, so wind is a renewable source of energy. There are other forms of energy that can run out. They're referred to as non-renewable energy. Non-renewable energy sources can take millions of years to form, so once they are used, they can't be replaced in a lifetime. 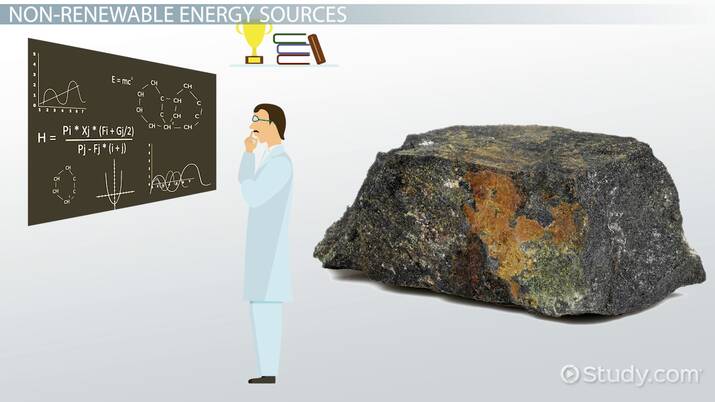 Coming up next: Nuclear Energy Lesson for Kids: Definition & Facts

There are four main types of non-renewable energy sources, which we'll look at here one at a time.

Oil, which is also referred to as crude oil or petroleum, is a liquid that is pumped out of the ground. Crude oil can be purified and turned into gasoline or diesel fuel for vehicles, or heating oil to warm your home. Did you know there's oil in your crayons? Oil is a very useful substance, and there are many everyday products made from crude oil, including plastic bags, paint, and crayons!

Natural gas is a gas that can be pulled out of the ground; it can be used for cooking or heating or be converted to electricity to power your computer.

Coal and uranium are mined from the ground. Coal is a black rock that can be burned to generate electricity. Uranium is a non-renewable element found in certain rocks. It's the energy source used in nuclear power plants to produce electricity.

Oil, coal, and natural gas are fossil fuels. Fossil fuels are the decomposed remains of plants and animals that were buried underground millions of years ago.

About 300 million years ago, Earth was covered by swampy forests and wetlands. Plants and organisms that lived in these swampy areas were full of energy that they absorbed from the sun. When they died, their remains settled to the wetland floor and got covered by layers of sand, dirt, and rock, which trapped their energy. Over time, layers of rock and sediment piled on top of the decaying organisms, creating the heat and pressure needed to turn them into fossil fuels.

There is no way to make more uranium, even if we waited for millions of years. Scientists believe this element has been on the planet since the beginning of time, about 4.55 billion years ago!

The good thing about non-renewable energy sources is that they can be extracted from the ground for relatively little cost. Also, they are a reliable source of energy that can be delivered on a continual basis, unlike power from the wind or sun, which comes and goes.

Okay, let's review what we've learned. Non-renewable energy sources are forms of energy that can run out. They can take millions of years to form, so once it's used, it can't be replaced in a lifetime. Types of non-renewable energy include uranium, as well as the three fossil fuels: oil, natural gas, and coal, which are basically the decomposed remains of plants and animals that were buried underground millions of years ago. Non-renewable energy sources are relatively inexpensive to use, but when fossil fuels are burned, they release greenhouse gases, which are types of atmospheric gases that trap heat and warm the earth.

How the Digestive System Works: Lesson for Kids

What is Energy Conservation? - Lesson for Kids