Dawn has taught chemistry and forensic courses at the college level for 9 years. She has a PhD in Chemistry and is an author of peer reviewed publications in chemistry.

View bio
Among the 118 elements on the periodic table, 17 are the nonmetal elements, which make up the majority of the universe and the living things within it. Study these essential elements, their key properties, and how they react with other elements. Updated: 10/11/2021
Create an account

What Are Nonmetal Elements?

Only 17 elements on the periodic table are nonmetal elements, yet they make up most of the matter in the universe and most of us living things!

Many sources define nonmetal elements as elements that are not metals and lack qualities of metals. What that means is that nonmetal elements are elements with relatively low boiling points, that are poor conductors of heat and electricity, and that do not readily give up their electrons. 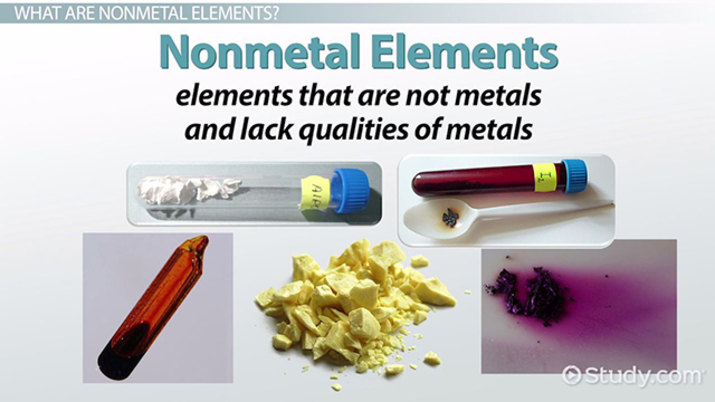 Most of the nonmetals are clear, odorless gases at room temperature. Hydrogen, helium, nitrogen, oxygen, neon, argon, krypton, xenon, and radon all fit into this category. 78% of our atmosphere is made up of nitrogen atoms, while 20% is made up of oxygen.

Chlorine is a yellow-green colored gas with a distinct odor that burns the nostrils in high doses. You may have smelled it when visiting a chlorinated pool. Fluorine is a yellow gas that is equally unpleasant to smell and definitely more toxic. Radon is unstable and often radioactive. It seeps into underground basements and must be pumped out through ventilation systems.

Bromine is a brown liquid at room temperature that readily evaporates into a deep orange gas. It's the only nonmetal element that exists in liquid form. Like chlorine and fluorine, bromine has a distinct odor and can be quite toxic.

The remaining elements, carbon, phosphorus, sulfur, selenium, and iodine, exist in solid forms at room temperature. Each of these nonmetal elements has several different solid forms it can exist in, though some forms are more common than others.

For example, carbon is most commonly found as graphite, but it also forms diamonds. The most common form of sulfur is yellow and brittle solid and slightly stinky, like rotten eggs. Phosphorus has many forms, one of which is a gas, white phosphorus, that can ignite if exposed to oxygen. Iodine is often a brown solid that easily sublimes into purple vapors.

The farthest right column of the periodic table contains some special nonmetal elements known as the noble gases. These elements are clear, odorless gases that are especially nonreactive. They exist most stably as lone atoms. Another word for this is monatomic.

Many nonmetals are extremely greedy for electrons and will take them from metals. In these reactions, a nonmetal like nitrogen, oxygen, fluorine, chlorine, phosphorus, bromine, or sulfur will attack a metal and steal its electrons. The nonmetal, with its surplus of electrons, is now a 'negatively' charged ion.

Meanwhile, the metal has a deficit of electrons and is now a 'positively' charged ion. Opposites attract, and this positively charged metal and negatively charged nonmetal form a compound known as an ionic compound.

Reactions with Other Nonmetals

Nonmetals are always searching to gain electrons rather than lose them. Many nonmetal elements like to bond with one other element of their own kind. In a battle of desire, some nonmetals can steal electrons outright from other nonmetals, but most of the time they elect to share electrons. This is called a covalent bond.

When two of the same elements are bonded together, they are called diatomic molecules. Nonmetals that prefer to exist diatomically include hydrogen, oxygen, fluorine, bromine, iodine, nitrogen, and chlorine. This series of nonmetals is often referred to as the HOFBrINCl series.

One example of nonmetals reacting to form a covalent compound is that of ammonia. Diatomic nitrogen reacts with diatomic hydrogen to produce ammonia. Another is when hydrogen peroxide breaks down into water and diatomic oxygen gas.

Nonmetal elements are abundant in the universe and incredibly important building blocks for life. There are 17 nonmetal elements, and all are located on the right side of the periodic table with the exception of hydrogen, which is on the top left side.

Nonmetal elements have relatively low boiling points, are poor conductors of heat and electricity, and don't like to lose electrons. Most nonmetals are gases at room temperature; however, a few are solids and only one (bromine) is a liquid.

The noble gases are an unreactive group of nonmetals that like to exist as independent atoms, or be monatomic. Metals and nonmetals react to form ionic compounds. In these reactions, nonmetals steal electrons from metals. Several other elements like to exist as diatomic molecules. They can be remembered as the HOFBrINCl series. These nonmetals share electrons and form covalent compounds.

About the Nonmetal Elements

The questions below will provide additional practice in identifying and understanding nonmetal elements. Solutions have been provided to check the accuracy of your answers.

1. Is selenium a non-metal?

4. Name a nonmetal that is in solid form.

5. Are halogens nonmetals? Why or why not?

6. What happens when a nonmetal reacts with a metal?

7. Do non-metals have low or high boiling points?

9. Are nonmetals malleable and ductile?

10. List a non-metal that exists in a liquid state.

3. No, non-metals are poor heat conductors

5. Yes, the halogens are non-metals. Halogens are close to having a full valance shell so they will easily gain electrons.

6. They can react to form an ionic compound.

10. Bromine can exist as a liquid

What is Krypton? | Krypton Atomic Number and Symbol

Using Displacement to Calculate the Volume of an Object