Normocytic anemia can be a misleading title, but it means that an anemic patient has normally sized red blood cells. Discover the diagnosis process for anemia and gain an understanding of the main causes of normocytic anemia. Updated: 09/29/2021
Create an account

There are terms in our language that are partially correct but perhaps slightly misleading. Lead pencils are pencils, but they're actually made of graphite. Tin foil is foil but made from aluminum.

This lesson will cover something known as normocytic anemia. The name is slightly misleading. Normocytic anemia isn't normal, despite the first word, because it's still anemia no matter what, and that's a medical problem that needs to be addressed. 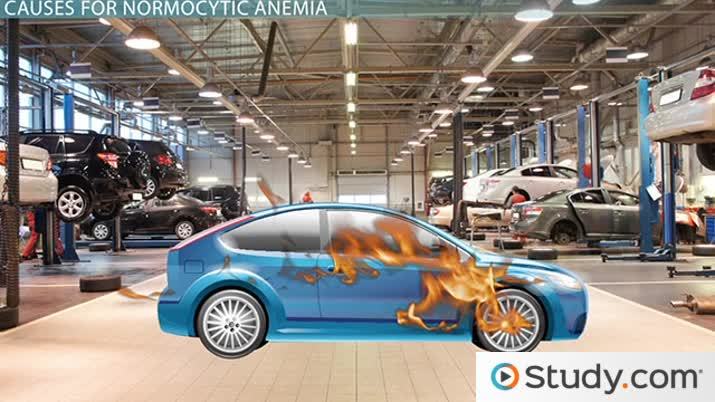 Coming up next: Microcytic Anemia: Definition and Causes

Anemia is a term that describes a decrease in the amount of red blood cells or hemoglobin. There are many different types, subtypes, and causes for each kind of anemia. In order for a doctor to try and get to the bottom of what may be the cause of the anemia, it helps to classify anemia by its presentation on blood work.

Therefore, a complete blood count (a CBC) is used to measure different red blood cell values. A CBC is a report about some of your body's functions. If your body was a car, a mechanic would do the same thing by inserting a scanner into the car to figure out what may be wrong with a particular system. In medicine, we insert a needle and submit the blood collected for analysis of the body.

Some diagnostic codes that pop up on a CBC are mean cell volume, or MCV, and red cell distribution width, or RDW. These are just two 'codes' that help us try to pinpoint the cause of anemia in a patient. If the MCV is in the normal range of values in an anemic patient, we term this normocytic anemia. Normocytic refers to red blood cells that are of a normal size. That is to say, they're not abnormally large or abnormally small.

In virtually any disease, inflammation occurs in the body. Inflammation is characterized by the release of all sorts of factors and molecules that initiate, promote, or stop the process of inflammation. Some of these factors destroy the precursors of red blood cells in the bone marrow, thereby leading to anemia.

Think of a product assembly line in a car plant. In order to get the final product, you need to assemble the car in a series of steps. If something, like a fire (which represents inflammation in the body), destroys the car as it is being assembled, or maturing, then you never get the final product.

Another important cause of normocytic anemia is chronic kidney disease. If the kidneys are badly damaged, then they cannot secrete erythropoietin, or EPO. EPO is a hormone produced in the kidneys that tells the bone marrow to produce red blood cells. In this case, our production plant never gets the signal to begin making cars in the first place.

Also, normocytic anemia can occur due to hemolysis (the destruction of red blood cells) or a sudden hemorrhage - that is to say, blood loss occurring internally or externally. In the case of the former, our car is simply destroyed right after it leaves the plant! In the case of the latter, the car is lost or stolen and, therefore, is no longer able to provide a service, like allowing its owner to drive around town. When it comes to red blood cells, that service is carrying oxygen around the body.

Now, there's a slight variation to normocytic anemia. If in normocytic anemia the MCV is normal but RDW is increased, then a suspicion of an early case of folate, vitamin B12, or iron deficiency may be appropriate. Normally, prolonged cases of folate and vitamin B12 deficiency cause macrocytic anemia, where the red blood cells are large. Conversely, chronic cases of iron deficiency anemia, the leading cause of anemia worldwide, are microcytic. This is where red blood cells are small in size. But in the beginning, all of these may be normocytic in nature.

Other Causes for Normocytic Anemia

By no means have we covered all the possible causes of normocytic anemia. Sickle cell disease is one other possibility. And so is myelophthisis. That's one weird looking and sounding word! Myelophthisis refers to the destruction and replacement of normal hematopoietic and supportive cells by abnormal and nonhematopoietic cells. Hematopoietic cells are cells that engage in hematopoiesis, the formation of blood, which includes things like red blood cells, white blood cells, and platelets.

Again, myelophthisis, the destruction and replacement of normal hematopoietic and supportive cells by abnormal and nonhematopoietic cells, is only one form of normocytic anemia. Hematopoiesis, by the way, refers to the formation of blood.

Normocytic anemia is characterized by normocytic cells, or red blood cells that are of a normal size. Meaning, our MCV is within normal limits on the CBC.

Once you have completed this lesson, you should be able to: