Amy holds a Master of Science. She has taught science at the high school and college levels.

A nuclear reaction, very simply, is a reaction that affects the nucleus of an atom. This is different from a chemical reaction, which has nothing to do with the nucleus of an atom but rather involves changes in atoms' electrons that orbit the nucleus. In chemical reactions, the electrons are exchanged from one or more substances to produce a different substance, and the elements are the same in the products and reactants. In nuclear reactions, the particles in the nucleus are changed, and one element is transformed into another element when particles in the nucleus are gained or lost. 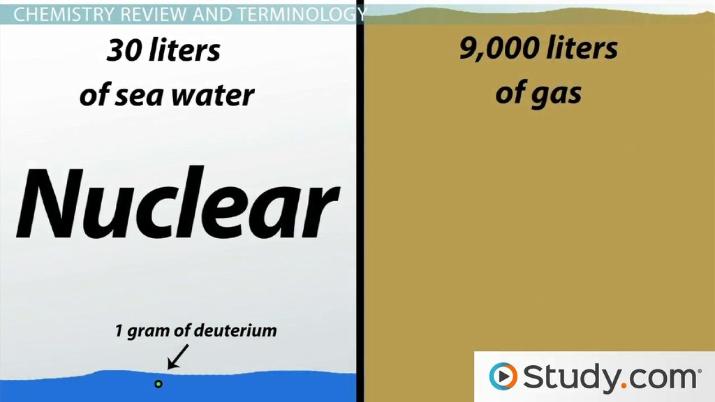 Let's do a little review of chemistry. An atom contains a nucleus where the protons and neutrons live surrounded by a cloud of electrons. These electrons live in energy shells around the nucleus. The atom is most stable when its outer shell is full. Atoms like to be stable. They work very hard to reach a level where their outer shells of electrons are filled by combining with other atoms and losing or gaining electrons. That is for chemical reactions. But as I said, nuclear reactions deal with the particles in the nucleus itself. These particles are called subatomic particles.

When we talk about nuclear reactions some of the terminology changes. The atom is now called the nuclide and we talk about how many protons and neutrons it has in its nucleus. The mass number is the sum of the protons and neutrons in the nucleus, and the atomic number is the number of protons in the nucleus. Nuclides are represented in one of two ways: either as 228 88 Ra, where the superscript is the mass number and the subscript is the atomic number; or as radium-228, where the number refers to the mass number.

In nuclear reactions, unstable nuclei spontaneously undergo changes to their numbers of protons and neutrons, giving off a lot of energy in the process and making themselves more stable. There are four types of nuclide emissions they can give off:

In an equation showing a nuclear reaction, the total of the atomic numbers and the total of the mass numbers must be equal on both sides of the equation: 4 1/1H nuclei = 4/2He nucleus + 2 Beta particles + energy. The beta particle is one of the types of nuclide emissions and equals a -1 charge.

Nuclear reactions result in much larger energy changes than chemical reactions. For example, one gram of deuterium that is present in about 30 liters of seawater would produce as much energy as 9000 liters of gasoline.

There are two main types of nuclear reactions, fission and fusion. Nuclear fission is when the nucleus of a large atom is split into two or more fragments. This releases neutrons and energy. Nuclear fission can occur spontaneously, or it can be started when nuclei are hit by particles. When the nuclei are hit, neutrons are blown out of them. These neutrons go on to hit other nuclei, which release more neutrons, and a chain reaction has started. The chain reaction continues until all of the nuclei are split and all of the atoms are stable again. In nuclear fission, when a larger atom breaks apart, the mass of the two products is less than the mass of the original atom. This mass is lost in the form of energy. This is known from Einstein's famous E = mc^2, which says that mass and energy are directly proportional. A gain in one equals a gain in the other.

Nuclear fission is what powers nuclear power plants. The plants use the energy produced from the splitting of atoms, usually uranium-235, to heat up water, which is converted to steam, which powers a steam-turbine generator, which turns the energy into electric current.

Nuclear fusion is when two small atoms combine to form a larger, more stable nucleus. This releases even more energy than nuclear fission. Light nuclei fuse together into a larger nucleus, but the larger nucleus has less mass than the total of the lighter nuclei. The mass is lost as energy.

This is the reaction happening in stars and our sun. In our sun, hydrogen nuclei are combining into a helium nucleus. Our sun is under tremendous heat and pressure, and that is why it can perform fusion. Scientists are working on ways to control this process on Earth so we can use it for making energy.

After viewing the video lesson, you should be able to illustrate the difference between nuclear fission and fusion reaction and describe how they are used for energy.

What is Nuclear Fission? | Definition and Example

The Process of Nuclear Fusion

Overview of Animal Reproduction and Development

Types of Radioactive Decay and Their Effect on the Nucleus