Marta has taught high school and middle school Science and has a Master's degree in Science Education.

What Are Nucleic Acids?

You probably hear about proteins, fats, and carbohydrates on a daily basis, and you may even plan your meals around them. What come up less often in everyday conversations are nucleic acids, which belong to the same group of compounds. Although you don't hear about nucleic acids as often, you likely consume them in every meal you eat. More importantly, your life depends on them.

So, what are nucleic acids? Up until 1868, scientists knew that every living thing was made of organic biomolecules (large, carbon-containing molecules made by living organisms), and they had been able to identify these as proteins, fats and carbohydrates. Then a young Swiss scientist named Friedrich Miescher made a discovery that would change the study of life forever: he isolated and identified a fourth type of biological molecule from white blood cells contained in pus he got from used hospital bandages.

He called the new molecule nuclein because it was extracted from the nucleus of the cells. The name would eventually be changed to nucleic acid, which is an organic substance found in the nucleus of living cells. From that moment, an exciting race began to try determine what the purpose of this new, mysterious biomolecule was, what its molecular structure looked like, and how it behaved.

Today we know that there are two types of nucleic acids found in every living organism: DNA (short for deoxyribonucleic acid) and RNA (ribonucleic acid). Together they are responsible for passing an organism's traits to the next generations, including what it will look like and how their body will work. This seems incredible for a mere chemical that looks like a blob of clear jelly in a test tube. 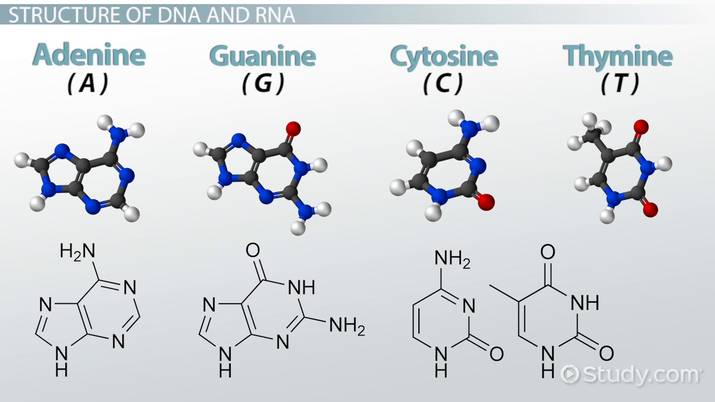 Coming up next: Polynucleotide: Structure, Overview

Structure of DNA and RNA

The structure of biological molecules is important because like the tools of any trade, their shape determines their function. It's difficult to imagine chemicals as having a 'shape,' so let's look a bit more into it to try to understand how the 3D shape of nucleic acids comes about.

Like other large organic molecules, nucleic acids are long chains made of individual, repeated units called monomers. The particular name for the units of nucleic acids are called nucleotides and each contains three things: a phosphate group, a sugar (deoxyribose in DNA and ribose in RNA) and a nitrogenous base.

There are different nucleotides named according to the nitrogenous base they contain:

The picture below shows the simplified structure of a nucleotide (in this case Adenine).

Nucleotides are able to form chains because the phosphate of one can attach to the sugar of the one above it, creating a 'sugar phosphate backbone' with the nitrogenous bases sticking out of the side. The main difference between the 3D structure of DNA and RNA is that DNA is made up of two chains of nucleotides twisted together (forming a spiral or helix) and RNA only consists of a single chain of nucleotides. If you think of DNA as a ladder, with the sugar phosphate backbone being the sides of the ladder and the nitrogenous bases the rungs, then RNA would be a ladder cut down the middle.

The famous 'Double Helix' structure of DNA is made possible because nitrogenous bases form complimentary pairs that can link together via hydrogen bonds like puzzle pieces. 'A' bases pair up with 'T' (via two hydrogen bonds), and 'C' bases form bonds with 'G.'

You might ask yourself: how could chemicals fit together like puzzle pieces? Recall that all molecules are three dimensional, they each have a shape and sometimes their 'nooks and crannies' fit together nicely. Chemical properties allow them to create bonds holding them close to each other.

The purpose of DNA is to act as a code or recipe for making proteins. Proteins determine how an organism's body is built and how it functions, which is why DNA is often called 'the blueprint of life.' For example, having freckles, brown eyes or the ability to roll the tongue are all characteristics resulting from the proteins a person's body makes. Some people have faulty recipes for specific proteins and this might lead to conditions such as lactose intolerance, diabetes, or cystic fibrosis. Proteins are equally as important throughout the rest of the living world, they determine things like whether a snake will produce highly lethal venom, the color patterns of tropical fish or whether a bacteria is resistant to an antibiotic.

DNA is responsible for the similarities between members of the same species and for continuing life, as it ensures that characteristics are passed on to future generations.

RNA helps the cell 'read' the code and 'translate' it by assembling the correct amino acid, the building blocks of protein sequences, in order to form the different proteins. Here's a simple cooking analogy for you: the amino acids are the 'ingredients' for the protein, the DNA sequence of bases is the 'recipe' of how to put these ingredients together, and the 'cook' that reads the recipe is the RNA.

The knowledge that 24-year-old Miescher derived from studying the pus on dirty hospital bandages led to the discovery and analysis of nucleic acid. Nucleic acid has two types, DNA and RNA, which not only helps us understand how life is determined, controlled and passed on, but also opened the door to a new technologies.

Nucleotide Examples, Function, Bonds & Molecular Structure | What is a Nucleotide in DNA?

What are Lipids?| Function, Chemical Structure, and Examples