Number sets are collections of numbers classified as groups according to the values of their elements. Learn about the characteristics of number sets, and explore the common examples of number sets. Updated: 12/21/2021
Create an account

We all deal with numbers on a daily basis, such as measuring out three-fourths of a cup of cereal for breakfast. They can be classified into number sets, which are just a collection of numbers. The most common number sets, along with the symbols we use to represent each set, are illustrated in the following image:

Number sets follow an order where each set is contained in the one that comes after it, with a few exceptions, as shown in the following diagram: 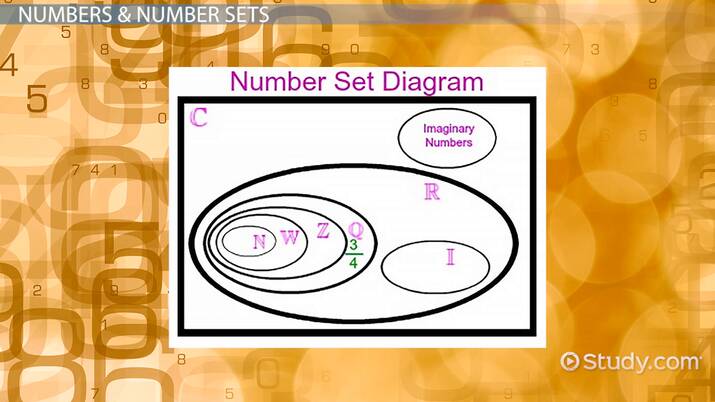 Coming up next: What is a Mathematical Sequence?

Different number sets are associated with different characteristics. If we know a number lies in a specific set, we know that it has a particular characteristic. This allows us to study numbers and how they work together more easily. Let's explore some of these characteristics.

A closed number set is one where performing a certain operation on two numbers in a set will yield another number in the same set.

Let's review. The numbers we deal with everyday can be classified into number sets, or a collection of numbers. Real numbers are those that we normally work with on a daily basis and include natural, whole, rational and irrational numbers, and integers.

A given number can belong to more than one number set if it satisfies the definition of those sets. For example, a closed number set is one where performing a certain operation on two numbers in a set will yield another number in the same set.

What types of numbers did you encounter today? Did they fall into any of the number sets we discussed in this lesson?

The Algebra of Sets: Properties & Laws of Set Theory

Special Sequences and How They Are Generated

Finite Set: Overview, Formula & Examples | What is a Finite Set?