Rachael has a background in secondary education and has practiced law for eight years.

The O.J. Simpson trial was a highly controversial trial of O.J. Simpson accused of the murder of his ex-wife and Ronald Goldman. Follow the timeline of events through the trial examining the evidence, and the greater context of the case to see its significance and controversy. Updated: 11/15/2021
Create an account

Background of the Case

The arrest and trial of former NFL star O.J. Simpson for the murder of his ex-wife, Nicole Brown, and her friend, Ronald Goldman, created a media frenzy. Lawyers, witnesses, police detectives, and even Judge Lance Ito himself became celebrities by being a part of this highly publicized trial. Courtroom terms became common topics of conversation as millions of people followed the trial of the former Heisman trophy winner and celebrity. 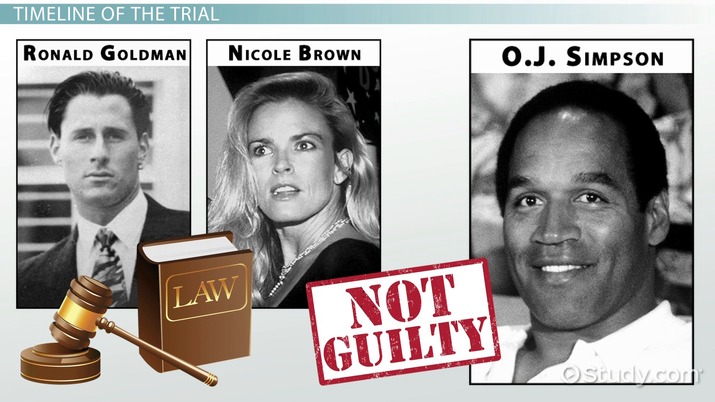 Coming up next: Mistrial: Definition & Motions

Timeline of the Trial

On the morning of June 13, 1994, the bodies of Nicole Brown and Ronald Goldman were found at Brown's apartment in the Brentwood neighborhood of Los Angeles.

The police began to investigate Brown's ex-husband, O.J. Simpson, a former NFL star, for the murders. On June 17th, an arrest warrant was issued, prompting Simpson to lead police on a low-speed chase in his white Ford Bronco before eventually being arrested. More than 95 million people watched this pursuit on live television, creating a high level of interest from the very beginning.

January 11, 1995 - Due to the heavy publicity of the case, the jury was sequestered, or kept separate from the public in order to avoid any influence on their decision-making.

February 12, 1995 - In an unusual move, jurors are taken on a tour of the crime scene under heavy police presence. The motorcade of vehicles included the prosecution, defense team, Simpson himself, Judge Ito and his staff, as well as a limited number of reporters and news media personnel.

October 3, 1995 - The unanimous (meaning all jurors voted the same way) not guilty verdict was watched by more than 100 million people as it was seen live during a television broadcast.

Simpson was released from jail after spending sixteen months awaiting a verdict. Although he was found not guilty of the murders, a civil suit was filed against Simpson and he was ordered to pay $33.5 million to the families of Brown and Goldman.

If one word could describe the crime scene investigation at the Brown home, it would be: sloppy. At trial, the defense team questioned the reliability of the evidence presented piece by piece. Although a bloody fingerprint was found on the gate of the home, it was never collected or processed. This was not the only mistake in the evidence collection process.

Multiple pieces of evidence were placed into the same bag rather than in individual bags, contaminating any evidence collected.

Generally, when pictures are taken during crime scene collection, a well-known object like a dollar bill or a ruler is used to provide scale. None were used in the photographs taken at Brown's home.

Items were not properly cataloged, and evidence was bagged while still wet, preventing any evidence collection. A blanket was taken from the home to cover Brown's body, contaminating all evidence found on the body. Finally, police and crime scene technicians improperly walked around the crime scene and dragged blood all over the scene.

DNA evidence was not as familiar as it is today, but the defense wasted no time in explaining that all of these pieces of evidence were subject to cross-contamination. This is the process by which DNA evidence from one piece of evidence can be transferred to another by improper evidence collection techniques.

Perhaps the most recognized piece of evidence presented was a bloody glove found at the scene. Prosecutors had Simpson try on the glove in court and were surprised to find that the evidence did not fit. Johnny Cochran, one of the attorneys on Simpson's legal team, used the infamous slogan, 'If it doesn't fit, you must acquit,' encouraging jurors to question the prosecution's theory of the case.

As part of the investigation, blood was drawn from Simpson in order to compare it to blood samples found at the crime scene, as well as from his Ford Bronco. The technician who drew the blood did not document how much was taken from Simpson. Based on the estimate provided, it was determined that approximately 25% of the blood drawn was missing. Additionally, when the blood was drawn from Simpson, it was not logged into evidence for several hours. The defense argued that the poor collection techniques used made it possible that Simpson's blood could have been planted at the crime scene by the police, specifically by a detective named Mark Fuhrman.

When called to testify, it was found that not only was Fuhrman an alleged racist, but that he perjured himself, or he lied under oath. He was asked whether he had planted evidence or completed false police reports. Instead of answering, he chose not to answer the question. By invoking his Fifth Amendment right against self-incrimination, which is choosing not to answer because it may prove you guilty of a crime, Fuhrman created considerable doubt in the entire investigative process.

A combination of media coverage, racial tensions, perjury, poor evidence collection, and the possibility that evidence had been planted all led to the drama when the not guilty verdict was released. To this day, the O.J. Simpson trial and verdict is highly debated. That is not the only effect of the trial.

Soon after the verdict, evidence collection techniques became more standardized to avoid cross-contamination and trials became televised more often for entertainment rather than information. While the trial highlighted the shortcomings of police investigation, it also exposed millions of people to legal terms and procedures as they watched media coverage, day after day, for over a year. To date, the Simpson trial remains one of the most notorious and well-known murder trials in the United States.

Set a goal, when you're finished with this video on the O.J Simpson trial, to: