Learn what Okazaki fragments are and how they are formed during the process of DNA replication. There is a short quiz to follow to see how well you understand the lesson.
Create an account

'What a strange-looking and sounding term,' may be the first thing that popped into your mind when you first heard the words 'Okazaki fragments.' I know that was my first impression. My next thought was that whatever they are, they're probably pretty complicated with a name like that. As I found out, that wasn't really the case! So what exactly does that complicated term refer to?

Okazaki fragments are fragments of DNA that are produced during the process of DNA replication. So now you may be thinking the same thing that I thought next which is, 'why not just call them DNA fragments?' Well, scientists have this knack for liking to name their discoveries after themselves or something that relates to them. Can you guess who discovered the DNA fragments? Yep, you probably guessed. They were discovered by a scientist by the name of Reiji Okazaki. 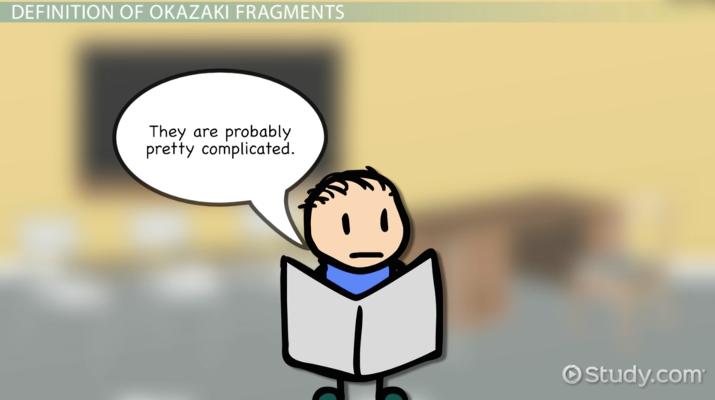 We've covered some of your initial thoughts on these fragmented pieces of DNA, so let's move on to the next thought. How are these fragments formed, and what is their significance? Okazaki fragments are formed as the lagging strand of DNA is copied. Let's quickly look at how this process happens.

We already know that DNA is synthesized in the 5' - 3' direction. This allows the leading strand to be complemented as it is exposed since it is already in the correct orientation. Since the lagging strand is opened in the opposite orientation from DNA synthesis, the complementary strand is completed piece by piece rather than as one continuous piece.