Olivia in 'Twelfth Night' experiences an intense feeling of sorrow when her brother dies. Study a character analysis of Olivia, with some quotes expressing her emotion, grief and obsessions. Updated: 09/14/2021
Create an account

Grief is a process. After the loss of our closest loved ones, we all experience a period of grief, a time when we mourn and remember the ones we've loved. After a while, it is natural to move on with your life and re-establish normalcy in your life. For some, it takes a while to overcome grief. Their lives are at a standstill and they don't feel like doing anything or being around anyone until something or someone reaches them on a different level.

Twelfth Night is a comedy written by William Shakespeare. One of the characters in the play, Olivia, experiences overwhelming feelings of grief following the loss of her brother. Olivia remains in a period of mourning until her curiosity is piqued by a young man who comes to her gate. 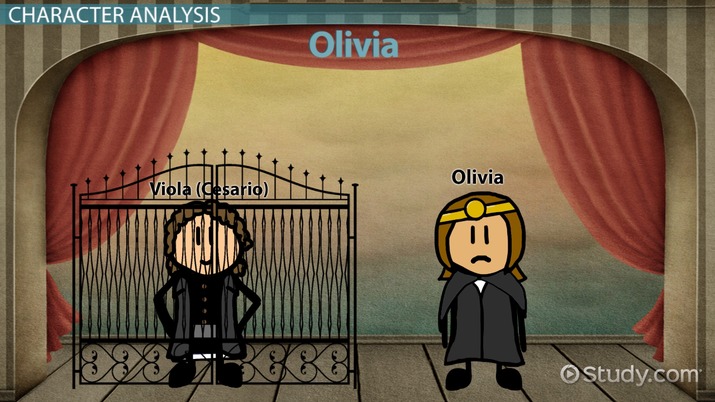 Olivia is a beautiful woman with strong emotional reactions and no male guidance; she is not married and no longer has a father or brother. Several of the men in the play feel Olivia needs a man to help her manage her life and fortune, but she is too overcome with emotions to give them a chance at pursuing her.

At times, Olivia can be emotional and dramatic. Olivia mourns the recent loss of her brother. Instead of expressing interest in others she drowns herself in her sorrows. She mourns in a dramatic way by dressing in black. When she cries, her tears are compared to a 'brine' that 'seasons' her 'brother's dead love' (Act 1, Scene 1).

At times it seems that Olivia uses her grief as a way to ignore the advances of men (such as Orsino) who desire her affection. It is not until Olivia meets a man she is interested in, Cesario, that she starts to move on with her life instead of grieving. (Olivia is not aware that Cesario is really Viola disguised as a man). She appears to fall in love with Cesario because she finds him attractive. She states, 'they tongue, thy face, thy limbs, actions and spirit. Do give thee five-fold blazon (Act 1, Scene 5).

Olivia is also determined to get what she wants. Instead of waiting for Cesario to pursue her, Olivia pursues him. She proposes to the man she believes is Cesario despite traditional Elizabethan custom, which states that women are to be silent and to be pursued by a man.

Olivia obsesses over her love for Cesario until she learns Cesario is really a woman and then she falls in love with a man named Sebastian, who is Viola's (Cesario's) twin brother. Once Olivia gets over her grief and stops being obsessive about her emotions, she is able to fall in love.

Olivia is one of the main characters in Shakespeare's popular comedy Twelfth Night. She falls in love with a woman disguised as a man (Cesario) until the end of the play. Olivia is overly dramatic and emotional at times but is also determined to get something if she truly wants it. She does not follow traditional Elizabethan values and wait for a man to pursue her, she pursues the man she is interested in. When she stops letting her emotions consume her, Olivia is able to fall in love with a 'real' man.