What is an Open Circulatory System?

So, what does this mean? Organisms that utilize an open circulatory system don't have 'true' blood since it is mixed with other fluids. The 'blood' in these organisms is defined as hemolymph, or the mixture between blood and interstitial fluid. You can remember that because 'heme' is Latin for 'blood,' and 'lymph' refers to liquid. 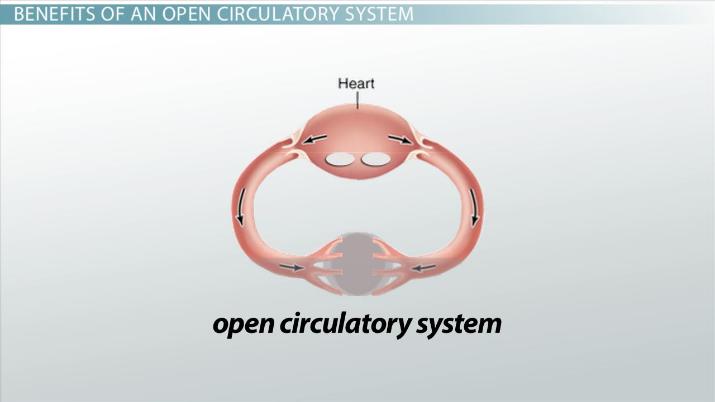 Coming up next: The Aorta: Valves & Anatomy

Two of the largest phyla in the world, Arthropoda and Mollusca, have an open circulatory system. Arthropods, members of the phylum Arthropoda, include most insects and sea organisms like crabs and lobsters. 'Arthro' is Greek for 'joint,' and 'pod' is Greek for 'leg,' so we combine this into 'jointed legs.' Think of what a grasshopper or a lobster look like; joint-legs is a great way to describe these animals!

Benefits of an Open Circulatory System

To explore the benefits of having an open circulatory system, we need to delve a little bit more into how it works. Because hemolymph flows freely in the body, this single fluid brings oxygen and nutrients to the organs and removes waste products.

Many insects have a tracheal system that brings oxygen into their bodies through a series of tubes. This means they have less energetic demand on their body since their oxygen system and circulatory system are separated. Think of how many times you breathe in a minute. The act of breathing brings oxygen into your body and gets rid of carbon dioxide. Now think about the number of cells in your body that have to carry those gases to your organs and muscles - that's a lot of work!

Another interesting aspect about organisms that utilize an open circulatory system is they can't create a blood pressure. In mammals, our blood pressure is due to the pumping of our heart. Remember, our blood is separated from our interstitial fluid. Organisms that use an open circulatory system don't have a 'true' heart. Instead, they utilize blood vessels that act as pumps to move hemolymph around the body.

Because these organisms don't have a blood pressure, external pressure doesn't cause a problem for them. Think of when you fly in an airplane or drive up the mountains - your ears pop, right? This is due to a change in external pressure. Pressure exerts a force on our bodies (think of a force like someone squeezing you tightly). When that squeeze becomes tighter, we need to relieve our internal pressure somehow. One of the ways we do this is having our ears 'pop.'

What would happen if we couldn't relieve the pressure? What happens when you blow a balloon up too much? A big pop, right? Because organisms with an open circulatory system don't feel this squeeze, there isn't a need to relieve pressure, and they can live at extreme depths in the ocean without injury!

Why Some Organisms Have a Closed Circulatory System

While having an open circulatory system works great if you're an insect that has a completely separate oxygen delivery system, most open circulatory organisms have limited activity or energy because it takes a while for their organs to get oxygen.

Organisms that have a closed circulatory system are more energy-efficient. We have one loop that brings oxygenated blood to our organs and tissues and another loop that takes blood with waste products in it away. Although humans have a high energetic demand (we need energy to run, talk, even sleep), we have an efficient way to oxygenate our tissues and muscles through closed blood circulation. Organisms with an open circulatory system have one fluid - hemolymph - that does it all. While it can be easy to combine everything you need into one fluid, it also makes it harder for that one fluid to do all the work.

This video lesson on the open circulatory system can prepare you to:

Circulatory System of a Squid

Overview of Animal Reproduction and Development