At the height of the Vietnam War in 1967, the United States implemented a large-scale, search-and-destroy campaign, 'Operation Junction City', against an insurgent force in the northern part of the country. Learn the planning of the operation, the execution of its phases, and the outcomes of three major airborne engagements during the operation. Updated: 10/06/2021
Create an account

The goal for the United States during 1967 was to begin driving out elements of the National Liberation Front (NLF), the insurgent force of North Vietnam, from the III Corps Tactical Zone in South Vietnam. In January, the United States Army successfully launched Operation Cedar Falls, which began the campaign of combating and eliminating the enemy within the region.

The positive results led to General William Westmoreland, commander of the Military Assistance Command, Vietnam, to organize a plan. This plan was codenamed Operation Junction City and was meant to eliminate the 9th NLF Division, as well as its coordinating center, known as the Central Office for South Vietnam (COSVN), from the III Corps Tactical Zone. 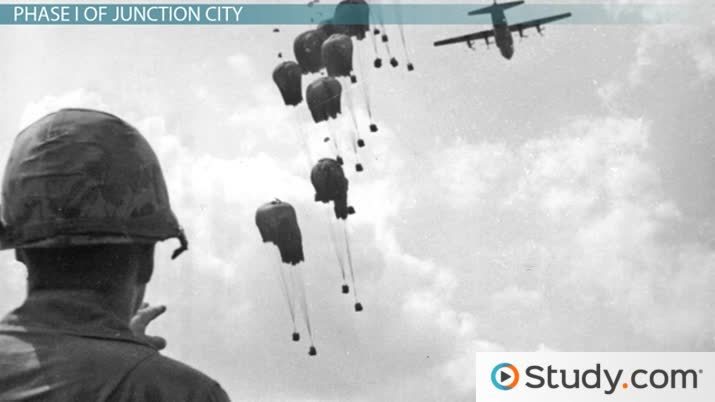 Coming up next: The Tet Offensive: The First Major Offensive from North Vietnam

American intelligence suggested that the main elements of the 9th NLF Division and COSVN were located within the Tay Ninh province, which was also referred to as War Zone C. The American military command needed to proceed with caution when creating a strategy to combat the enemy within the region due to its ability to escape and seek asylum in neighboring Cambodia. As a result, the military tactic of encirclement, or surrounding and eliminating the enemy, was pursued.

Westmoreland ordered the United States Army's 1st and 25th Infantry Divisions, as well as the 11th Armored Cavalry Regiment and the 173rd Airborne Brigade, into War Zone C. The use of the 173rd was a seminal decision by Westmoreland as this was the first and only deployment of a paratrooper division during the Vietnam War. Notwithstanding, American military leadership developed the 'horseshoe' strategy.

The goal was to establish a 'horseshoe,' or 'U' shape, perimeter around the suspected location of the 9th NLF Division and COSVN. The 'U' was also expected to prevent the enemy from retreating into Cambodia. After the defensive perimeter was pitched by the 173rd, the expectation was that elements from the 25th and 11th would march in from the open end of the 'U' and crush the enemy. Unfortunately, everything looked better on paper.

Phase I of Junction City

The opening salvo of Junction City was launched on February 22, 1967. The 173rd quickly established the 'horseshoe' shape and ground forces began conducting search-and-destroy operations to eliminate the suspected enemy within the region. Through the first five days of the campaign, the results were negligible. In fact, the majority of COSVN had been relocated into Cambodia prior to the American arrival. Worse yet, the enemy began targeting American forces through hit-and-run tactics.

Throughout the early days of March, the NLF began ambushing the United States on a regular basis. The sound American leadership was quickly able to reassess the situation and launch a counterattack, but the results, again, were unimpressive. Frustrated over the early results in War Zone C, Westmoreland ended the first phase of Junction City on March 15. The United States, however, was not ready to concede to the enemy. Immediately following the end of the first phase, Westmoreland ordered the beginning of phase II of Junction City on March 18.

The American military leadership did not originally anticipate a second phase to Junction City, because they thought the overwhelming 'horseshoe' strategy would be enough to complete the main objective of eliminating the 9th NLF Division and COSVN. Nevertheless, Westmoreland approved phase II of the operation, which shifted American forces east of the original 'horseshoe' location and focused more on search-and-destroy and less on encirclement. The emphasis on attrition warfare led to three violent clashes between the United States and the NLF from March to May.

The first engagement occurred at Firebase Gold on March 21 and was known as the Battle of Suoi Tre. The United States had established the firebase following the renewal of Junction City. American intelligence expected an enemy attack to occur on the night of March 20, if at all. However, unexpectedly on the morning of March 21, the 272nd NLF Regiment launched a significant attack against Firebase Gold. The Americans were initially overwhelmed and on the verge of defeat until reinforcements arrived. Once the United States regained the upper hand, the 272nd Regiment was annihilated. Roughly 650 enemy soldiers perished during the battle while the United States suffered losses of 31.

The second skirmish occurred simultaneously at Firebase 14 on March 20, which was located at Bau Bang. Unlike the attack at Firebase Gold, the 273rd NLF Regiment decided to ambush the Americans at Firebase 14 during the night of March 20. They were quickly repelled by superior American firepower, but they returned the following morning of March 21. Again, the enemy was held in check and did not cause substantial damage to the United States. Overall, 230 NLF soldiers were killed during the Battle of Bau Bang.

The final encounter took place on April 1 at Ap Gu, where the United States had established Landing Zone George. The 9th NLF Division emphasized the importance of this battle as its regiments had been decimated in the previous two engagements. The 271st NLF Regiment was designated with the task of combating the Americans. Originally, the 271st was scheduled to attack an installation known as Firebase Charlie.

However, orders from COSVN altered the strategy and focused on Landing Zone George. The NLF once again launched a major attack against the United States, but, again, was quickly defeated by tactically sound American soldiers and superior firepower. The United States recorded 500 enemy soldiers killed as compared to the 17 Americans lost.

Operation Junction City had been hailed as a significant success for the United States Army. The total number of enemy killed during the campaign was roughly 2,700 soldiers as compared to the 280 American dead. Additionally, the United States captured key war material such as maps, letters, weapons and food reserves.

The NLF had been thoroughly beaten - the remaining elements of the 9th Division retreated into Cambodia and began rebuilding. The NLF vowed to avoid additional conventional confrontations with the United States, instead settling on ambush tactics. Yet, while the United States successfully dented the 9th NLF Division, the enemy would eventually return to the region and cause additional complications in the future years of the war.

Operation Junction City, launched February 22, 1967, was an effort by the United States Army to eliminate the presence of the National Liberation Front (NLF) and its coordinator center, the Central Office for South Vietnam (COSVN), within the III Corps Tactical Zone. For the first and only time during the Vietnam War, the United States Army utilized the 173rd Airborne Brigade as a means of parachuting behind enemy lines and establishing the critical 'horseshoe,' or 'U,' perimeter.

The first phase of fighting witnessed ambushes from the NLF, while the second phase yielded large-scale battles. The three major engagements at Firebase Gold, Bau Bang and Ap Gu left the NLF staggered, but not quite defeated. The enemy eventually returned to the region and caused complications throughout the rest of the war.