Jayla and Tim are two close friends who do everything together. They even have all of the same classes. Jayla and Tim's least favorite subject is math, so the duo was completely caught off guard when they walked into their math class and were given a pop quiz. Neither Jayla nor Tim was prepared for the quiz. As a result, both received failing grades. After seeing her grade, Jayla thinks, 'The math test was tough! I will work hard and study so that I can do better on the next quiz. I will not fail again.' Tim thinks, 'I am so stupid. I always fail at everything. I will never do well in math.' 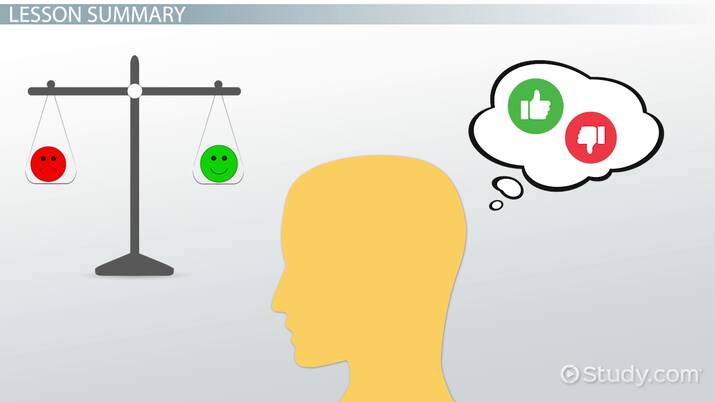 Coming up next: Realistic vs Optimistic Thinking

What Is Optimistic Thinking?

Jayla is an example of optimistic thinking. Optimistic thinking is a type of positive thinking characterized by the belief that the future is full of hope and opportunities to be successful. They believe that negative events are caused by external factors, and that they are isolated exceptions to the rule.

When something bad happens, people who think optimistically believe that it's not something that will reoccur, they aren't responsible for the bad event, and the event has a limited effect. For example, Jayla believes that she failed the test because the test was difficult, which is an external factor. She believes that she's going to pass the next test, which indicates that Jayla believes that her failure is an unstable event that won't likely reoccur.

She also believes that her failure is a specific, isolated event. Had Jayla passed, she would have likely attributed her success to her math abilities, and believed that her abilities would allow her to continue to do well on future math tests, and that she will continue to be successful in other endeavors as well.

Optimistic thinking is beneficial because it increases your self-esteem, ability to handle stress, mood, ability to recuperate from sickness, and overall mental and physical health. However, too much optimistic thinking can result in making bad financial decisions and underestimating risks.

What Is Pessimistic Thinking?

For example, Tim believed that he failed the math quiz because he is stupid. Tim also believes that he'll just continue to fail math tests in the future and that he will fail at everything. If Tim had passed, he would have attributed his success to luck, believed that it would not happen again, and that it has no bearing on his future success.

For example, take gambling. We know that the odds of winning at a casino are slim. After all, casinos make money when people lose. Optimistic thinking would likely cause a person to go to a casino thinking that they will win regardless of other factors. An optimistic person might keep playing, despite losing huge sums of money, because they believe that their persistence will pay off.

All right, let's take a moment to review. In this lesson, we learned that optimistic thinking is characterized by a positive outlook on life and the belief that the future is full of great things, while pessimistic thinking is characterized by a bleak outlook of the future and the belief that things will always be bad. Optimistic thinkers tend to credit themselves when things go right and external factors when things go wrong, whereas pessimistic thinkers believe that they are responsible for their own failures and when something good happens, it is due to luck or some external cause.

What Is Optimism? - Definition & Explanation

What Are Capital Resources? - Definition & Examples

Giving and Responding to Constructive Feedback

The Components of a Telecommunications System