Informational texts are nonfiction and intended to inform the reader about various topics, typically organized intentionally for maximum understanding. Learn about the organization features, title structures, and strategies used in informational texts. Updated: 12/02/2021
Create an account

How do authors communicate information? Without a few helpful techniques, nonfiction writing could be as overwhelming and monotonous as a phone book or the list of classified ads at the end of a newspaper - boring!

Authors of informational texts use a number of different organizational features and structures to help you better understand what you're about to read. Let's take a look at those now. 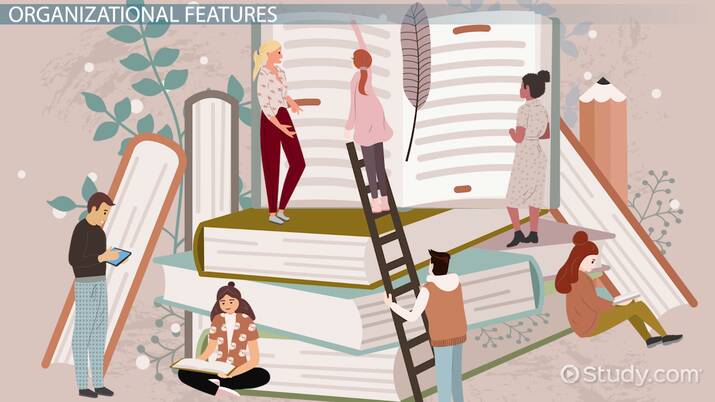 Coming up next: The Writing Process: Definition & Steps

Underneath headings, you may also find subheadings that give you clues about parts of the larger section. Both headings and subheadings are usually indicated by a different style or font than the rest of the text. These differences may be from a different font size, or if the text is bold, underlined, or italicized. Bold, underlined, or italicized fonts may also be used to highlight key words, phrases, or quotes for the reader.

In many instances, you'll find that informational texts use more than one type of text structure at the same time. Let's go over these structures in more detail.

Compare-contrast text structure highlights the similarities and differences between two or more things. Authors can use this structure to compare two or more things in a single paragraph. They can also dedicate entire paragraphs and even sections to a single point of comparison. For example, a literature essay might compare and contrast plot developments in Shakespeare's Hamlet to that of the movie The Lion King. Both have a proud king killed by accident (supposedly) by the evil brother, and after some time the prince returns to reveal the truth after having ghostly visions.

Sequential text structure is used to organize information chronologically, with chronologically meaning in the order that events happened. It can also be used to explain steps in a process. Sequential text structure is especially helpful in social studies and science. Imagine learning about historical events like the conquest of America or reading steps in a scientific experiment out of order. That would be very confusing!

Cause-effect text structure shows the relationship between an event or action and the events that happened after it. To determine if a structure is cause-effect, it has to meet two criteria:

This structure is often seen in expository or persuasive writing. For example, an article might outline the transmission of the HIV virus, and the effects of its spread in a region. Or it could be to explain a set of rules, like forbidding cell phone use in class because they distract the students, who then get docked points for participation and usually don't understand the material because of their lack of focus.

Problem-solution text structure is pretty self-explanatory! This structure explains a problem or an issue and then describes various ways to go about fixing that problem. For example, a climatology journal might describe the nature of climate change, then outline possible ways to curb it.

Identifying the Organization in a Reading Selection

How to Analyze the Purpose of a Text

How Structure Affects the Style of a Text

Math Mnemonics Examples & Use | How to Use Mnemonic Devices for Math

How to Compare Information in a Text: Lesson for Kids

Sarcasm in Literature: Explanation & Examples | What is Sarcasm?

Fact vs. Persuasion vs. Informed Opinion in Nonfiction