The process of harvesting species from a natural habitat at a rate faster than the species can repopulate is called over-exploitation. Learn about overfishing and how humans negatively affect ecosystems by decreasing species populations. Updated: 09/21/2021
Create an account

Humans often take too many of one species from their natural habitat. Typically, this involves a species used as a food source. When a species is harvested, or taken at a rate faster than the population can compensate for, the population is listed as overexploited, or overharvested. Think of this like a full cookie jar in a room full of hungry people. The more people that take cookies, the fewer are left in the jar. It takes time to bake more cookies, and if the cookies in the jar are eaten faster than they can be made, soon you run out of cookies!

When the population numbers of a species decline to the point where the animal or plant could possibly go extinct, or cease to exist, the organism is classified as endangered. Removing a species from their natural habitat can be detrimental. Not only does this threaten the biodiversity, or the variation of life within an ecosystem, but is also disrupts the balance of the ecosystem itself. 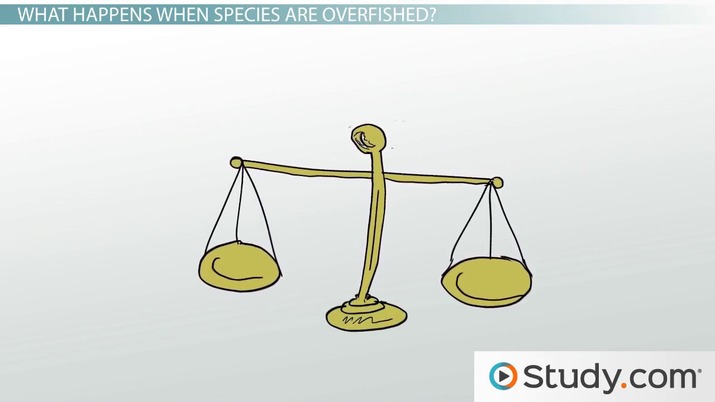 Coming up next: What Is Conservation Biology? - Definition & Principles

The best example of overexploitation of a resource is overfishing. Humans have caused the population decline of hundreds of species by overfishing or overharvesting them. When certain species of animals are considered especially tasty, or are considered a delicacy, the demand for those species goes up. Unfortunately, this typically means that those species are overharvested or overfished without regard to population numbers or how it will affect the ecosystem if they no longer exist. Two examples of fish species which have been overfished are bluefin tuna and sharks. Bluefin tuna are prized for their meat for sushi (the record is a single fish selling for over $1 million!), and sharks are harvested for their fins to make shark fin soup. Without their fins, the sharks cannot swim, and they drown.

What Happens When Species are Overfished?

So, why is overfishing bluefin tuna and sharks a problem? Both of these species are considered top predators in the oceans. This means they are responsible for keeping all the other population numbers in check. Remember that ecosystems work like a balance; one small change can have drastic effects for the ecosystem as a whole. Let's take a look at an example. On a coral reef, there are small fish called grazers. These fish eat algae and other small plants. The large predators of the reef, such as sharks, eat the smaller fish. If sharks did not exist, then the number of grazing fish would drastically increase. This means these fish would need to eat more and more algae, which would eventually kill the reef off. This means that hundreds of species of plant and animal would no longer exist. So, you can see that the presence of a top-predator is vital to overall ecosystem health.

Unfortunately, eliminating a top predator isn't the only way to damage an ecosystem by overfishing. There are several harmful fishing practices which directly damage an ecosystem. One of them is trawling. When a fishing vessel trawls for a high-demand food item like shrimp, it drags a large, weighted net for hundreds of feet along the ocean bottom. This not only destroys habitats within the ocean ecosystem, but numerous species are caught and killed in the trawling net that were not the targeted species. Rarely are these species utilized in any way, and are called bycatch. Bycatch from fishing nets can include fish, other invertebrates, or animals without a backbone, and even larger organisms, such as turtles and dolphin.

When humans harvest a species from their natural habitat at a faster rate than the species can repopulate, the species is labeled as overexploited or overharvested. Typically, overharvested species are used as a food source. Overexploiting a species can have detrimental impacts on ecosystem health. The best example of humans overharvesting species is overfishing. Typically, species which are overfished are top predators, and removal of these species changes an entire ecosystem. Additionally, overfishing can directly impact the oceans by destroying habitats with trawl nets. Finally, many organisms get caught and killed in trawl nets that were not the intended target species; these are known as bycatch.

Following this lesson, you'll have the ability to: