Elizabeth teaches undergraduate courses in Business and Information Technology for the last 7 years. She is currently on course to completing a Doctorate in Information Systems

Overview of the OLI Framework

In this day and age of rapid globalization, it has become so common for companies to set up shop in locations that were previously outside their country of operation. In order to illustrate this better, let us use the example of Shoes International. Shoes International is a company from North America that hopes to set up shop in Asia and is currently deciding on the best approach to use in order to plan and effectively implement their expansion to Asia.

They hope to use a foreign direct investment approach in their expansion strategy. This approach means that Shoes International will not provide licenses to foreign re-sellers but instead, it will acquire its own assets in Asia and set up headquarters there as well. By using the foreign direct investment approach, Shoes International will also have direct control of all assets that it will have in Asia. This includes purchase and control of all buildings, offices, machines, equipment, and the likes that it will need in the new location in Asia. 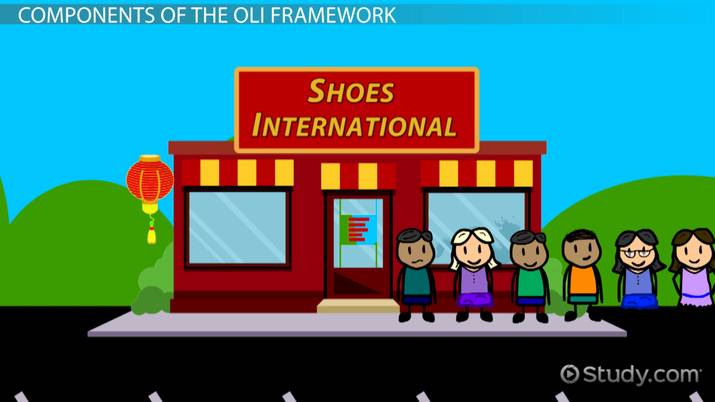 Try it now
Back
Coming up next: Indirect Expansion Methods in International Business

Application of the OLI framework

In order to begin this strategy, Shoes International needs to really justify its chosen approach. This is especially so because the cost of running a business in a foreign country is often higher than running one domestically. Shoes International also has to consider costs of cultural differences adjustments in the new location. Shoes International can effectively justify its approach by using the ownership, location, and internationalization (OLI) framework, also known as Dunning's eclectic paradigm. This framework is useful in determining holistically if carrying out a foreign direct investment is viable for the organization or not.

Components of the OLI Framework

As mentioned, this framework can greatly help companies hoping to make foreign direct investments by providing clear justifications for the choice. The OLI framework is made up of the following three main components. They include ownership, location, and internationalization advantage.

In this light, companies such as Apple, Samsung, and GlaxoSmithKline have positive reputations for providing high quality products. They also have innovative products that provide an edge over their competition. This could be an example of some ownership advantage that would enable them manage Foreign Direct Investments effectively.

However, there is the argument that Shoes International might as well sell its products domestically using its current patents and innovations instead of incurring the additional business costs that come with setting up foreign direct investments. Here is where the location advantage counterargument comes in. How can Shoes International justify that the Asian location will provide greater returns on investment for the company than returns on investment in the domestic market?

For example, if Shoes International requires a certain natural resource (for example fuel) and this resource is readily available in Asia at a cheaper price, then this becomes an excellent justification for location advantage. Shoes International can also consider the cost of production. It may be cheaper to manufacture and sell products within the same location (such as Asia) than in a separate location (such as North America) where logistics and costs of transportation may need to be considered.

Companies in the pharmaceutical industry, for example, are often very reluctant to provide licenses to foreign companies to develop their medicines on their behalf, as this may force them to reveal their patents and innovations to third parties who may eventually steal their ideas or reduce the quality of the product, thereby reducing the reputation of the company. These all describe the internationalization advantage as a justification for carrying out foreign direct investments.

The following diagram better illustrates how the OLI framework would work. It's depicted as a flow chart indicating the steps that an organization would take if it intends to have foreign direct investments.

This lesson provides an overview and description of the ownership, location, and internationalization (OLI) framework, also known as Dunning's eclectic paradigm. This framework is used to justify why a company should make foreign direct investments instead of remaining in its home turf. Therefore, the lesson argues that the OLI framework is useful in enabling a company to effectively justify why it should set up shop in another country.

Cost of Doing Business Abroad vs. Liability of Foreignness

Currency Hedging Overview & Examples | What is Hedging in Financing?

Futures Contract in Finance Purpose & Examples | What Are Futures?

How Marketers Use Learning & Memory Theories