Tony has a BA in Biology and has taught secondary Life, Earth, and Physical Science, as well as Honors & AP Chemistry.

Oxidative phosphorylation is the process that enables the body to produce adenosine triphosphate (ATP), which is needed for the transfer and storage of energy in cells. Explore the definition, steps, and products of oxidative phosphorylation, review an analogy, and learn how the process works, including the three stages of respiration and making ATP. Updated: 10/09/2021
Create an account

Hydroelectric dams use falling water to convert kinetic energy into all of the electrical energy we use in our homes. Falling water is thus indirectly powering my computer, washing machine, dishwasher, desk lamp, printer, and ceiling fan. This process can be easily understood by an observer like you and me because it is on a large enough scale. A huge amount of water is held up on top of a cliff, with the potential to release a lot of energy when gravity is allowed to naturally pull it down through the dam. The dam collects this released energy and then converts it into electrical energy by using the flow of falling water to spin magnets. These spinning magnets create electricity, which is collected in a conducting material, like copper wires, and sent to our homes to do other work. 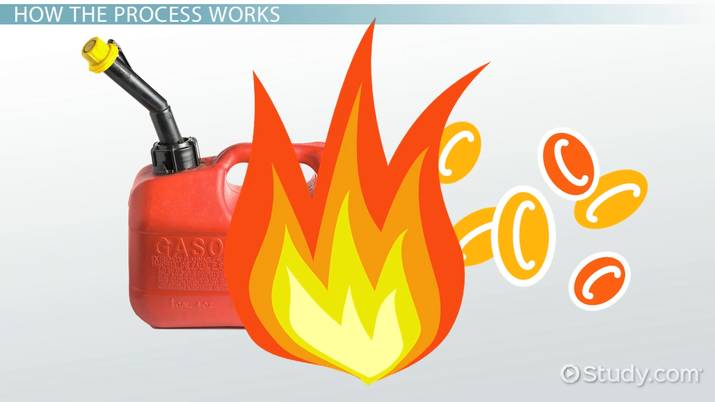 Try it now
Back
Coming up next: Histamine: Definition, Effects & Role

What Is ATP and Phosphorylation?

The molecule shown above is known as ATP, short for adenosine triphosphate. It is the central character in bioenergetics, or the transformation of energy to do work in a living system. It is composed of a nucleic acid (adenine), a sugar (ribose), and a triphosphate tail (3PO4 3-).

The triphosphate tail of ATP is the chemical equivalent of a loaded spring. Losing a phosphate from its tail is like a spring returning to its most useless state, or relaxing. The cell taps this energy source by using enzymes to transfer phosphate groups from ATP to other compounds, which are then said to be phosphorylated. Phosphorylation primes a molecule to undergo some kind of change that performs work, and the molecule loses its phosphate group in the process. If the cell were like a clock, ATP would be like the coiled spring that provides the energy necessary to move all of the gears within the clock. But unlike a clock, which needs to be recoiled, a living cell can recycle used ATP by adding more phosphates to its used forms, ADP or AMP (adenosine diphosphate or adenosine monophosphate) through the process of oxidative phosphorylation.

What Is Oxidative Phosphorylation?

Oxidative phosphorylation is the use of electrons falling from the hydrogen in glucose to the oxygen in a living cell. These falling electrons provide the energy necessary to pump H+ ions up a hill. When these H+ ions fall back down the hill, this energy is used to phosphorylate, or attach a phosphate group (-PO4 3-), to ADP to make the high-energy molecule ATP, which the cell can now use again to do vital work.

How the Process Works

Mitochondria are like the power plants of the cell. The number of mitochondria within a cell is directly related to how active the cell is, or how much power the cell requires. One of the major energy-carrying molecules within a cell is ATP, and it is made by mitochondria through a three-step process that we'll learn about in the next section. The overall process the mitochondria perform is known as cellular respiration, and the following chemical equation summarizes the process of burning sugar in the presence of oxygen, which produces carbon dioxide, water, and energy (heat & ATP):

This process is similar to the combustion of gasoline in the presence of oxygen to drive the pistons of a car. Both have carbon dioxide, water, and energy as their end products. The car and the living cell then use the energy from the breakdown of the organic molecule (gasoline or glucose) to perform other tasks and give off a lot of heat.

The 3 Stages of Respiration

Respiration is a cumulative function of three metabolic stages, which are diagrammed below:

Making ATP During the Process

Oxidative phosphorylation occurs within the inner mitochondrial membrane and the mitochondrial matrix. Embedded within the inner mitochondrial membrane are various proteins that pass the electrons being carried by NADH and FADH2 slowly downhill, releasing energy along the way in manageable amounts down to O2, molecular oxygen. If these electrons were to fall from NADH or FADH2 directly to O2, it would be two much energy released at one time, just like the flow of water through a dam also has to be slowed, or else the system would break.

The energy released from these falling electrons is used to pump hydrogen ions (H+ ) uphill. Then when these hydrogen ions fall back downhill, they do so through protein complexes called ATP synthases. This is the site of oxidative phosphorylation and the production of about 34 ATP molecules from one molecule of glucose. This diagram from earlier is a simplified model of these two interrelated processes needed to produce ATP through oxidative phosphorylation:

Let's review. Oxidative phosphorylation is using the energy released from electrons falling downhill to add phosphate to adenosine diphosphate to produce ATP. ATP, or adenosine triphosphate, is the higher energy molecule a cell uses to do work and survive. Oxidative phosphorylation is one stage of cellular respiration and occurs within the organelles, or tiny organs with specific jobs that help the cell survive, of the cell, specifically from the mitochondria, or the power plants of the cell. Along with glycolysis, or the splitting of sugar, it allows a living cell to metabolize glucose, converting it to a more useful form for the cell. Revisiting the dam analogy, it's like converting flowing water to a more useful form for us, electricity. The overall process of cellular respiration can be represented in the following chemical equation:

Oxidative phosphorylation is the process through which ATP is produced in this equation we just looked at during cellular respiration.

Pyruvate in Cellular Respiration Cycle & Role | What Does Pyruvate Do?

Stolons: Overview & Examples | What is a Runner Plant?