Will has a doctorate in chemistry from the University of Wyoming and has experience in a broad selection of chemical disciplines and college-level teaching.

View bio
Elements whose outermost electrons are in the p-orbital are known as 'P-Block' elements, found in a block on the periodic table. Explore an overview of the properties of this array of 35 elements organized as metals, metalloids, nonmetals, halogens, and noble gases. Updated: 09/24/2021
Create an account

What Are P-Block Elements?

There are 35 elements that live in the p-block, which can be seen here.

The p-block is home to the biggest variety of elements and is the only block that contains all three types of elements: metals, nonmetals, and metalloids. Generally, the p-block elements are best described in terms of element type or column number. 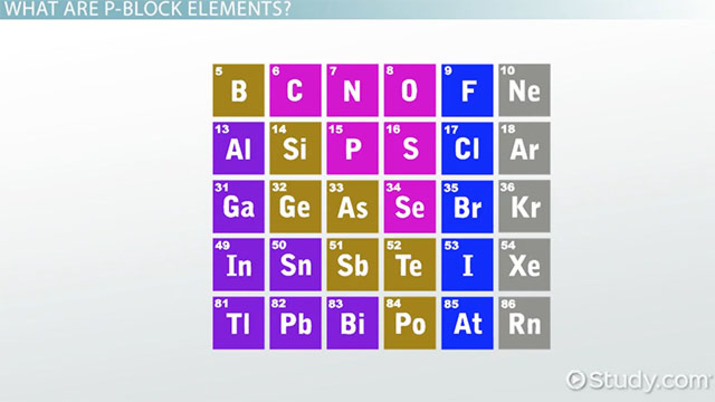 P-block metals have classic metal characteristics: they are shiny, they are good conductors of heat and electricity, and they lose electrons easily. Generally, these metals have high melting points and readily react with nonmetals to form ionic compounds. Ionic compounds form when a positive metal ion bonds with a negative nonmetal ion.

Of the p-block metals, several have fascinating properties. Gallium, in the 3rd row of column 3A, is a metal that can melt in the palm of your hand. Tin, in the fourth row of column 4A, is an abundant, flexible, and extremely useful metal. It is an important component of many metal alloys like bronze, solder, and pewter.

Sitting right beneath tin is lead, a toxic metal with an intriguing history. Ancient peoples used lead for a variety of things, from food sweeteners to pottery glazes to eating utensils. Unbeknownst to these ancient civilizations, lead is quite toxic. Many historians suspect that lead poisoning is related to the fall of Roman civilization. For a long time, lead was used in the manufacturing of paints. It was only within the last century that lead paint use has been restricted due to its toxic nature.

Metalloids have properties of both metals and nonmetals, but the term 'metalloid' lacks a strict definition. All of the elements that are commonly recognized as metalloids are in the p-block: boron, silicon, germanium, arsenic, antinomy, and tellurium.

Silicon is perhaps the most famous metalloid. It is the second most abundant element in Earth's crust and one of the main ingredients in glass. It is used to make microchips for computers and other electronic devices. So valuable is silicon to the technology industry that Silicon Valley in California is named after it.

Germanium has properties very similar to silicon, yet this element is much more rare. Arsenic is a toxic metalloid that has been used throughout history as an additive to metal alloys, paints, and even makeup.

Carbon, phosphorus, sulfur, selenium, and iodine regularly occur as solids. Pure carbon commonly occurs as graphite or diamond, but it can bond with other elements to form a variety of compounds. Carbon is considered to be the most important element to life because most compounds essential to living things contain carbon. Phosphorus, sulfur, selenium, and iodine make brittle solids of various colors.

Nitrogen and oxygen often occur as gases, and both elements are important to living organisms. Nitrogen is the most abundant element in our atmosphere; approximately 78% of it is made of nitrogen. In its gaseous form, oxygen makes up 20% of our atmosphere.

Column 7A is made of five nonmetal elements with very similar properties. Collectively, these p-block elements are known as the halogens. They have five electrons in their p orbital and are known for being extremely greedy for electrons. They like to steal electrons from metal elements to become 1- ions. If stealing electrons is not a possibility, they will bond with themselves and share electrons. Fluorine, chlorine, and bromine gases are toxic, while astatine is so radioactive it decays almost as soon as it exists.

The group that resides in column 8A is called the noble gases. Their p orbitals contain six electrons. This group is nonreactive and generally does not bond with other elements, preferring to exist by themselves. These gases are clear and odorless.

Now let's talk about some new discoveries. Elements 113-118 may have either just been discovered or they very likely exist. These elements have all been created in laboratories using particle accelerators. For the most part, they are such unstable elements that they only exist for a few seconds (or even less time) before they decay. It is assumed that their properties would be similar to other p-block elements.

The p-block is the area of the periodic table containing columns 3A to column 8A (columns 13-18), not including helium. There are 35 p-block elements, all of which have valence electrons in the p orbital.

The p-block elements are a very diverse group of elements with a wide range of properties. The p-block contains metal, nonmetal, and metalloid elements. Some of these elements are extremely abundant (oxygen, silicon), some are toxic (lead, arsenic), and some are very useful (tin, aluminum).

It is also home to the very reactive halogens (column 7A), the nonreactive noble gases (column 8A), and some of the most recently discovered elements (elements 113-118).

Study the lesson until you feel prepared to:

The following questions are meant for discussion and exploration.

Pure carbon has a couple of allotropes. One is graphite and one is diamond, the hardest natural mineral. A picture of how carbons are bonded in diamond is below:

Chemical Properties of Oxygen and Sulfur

Chemical Properties of Oxygen and Sulfur: