Jeff has a master's in engineering and has taught Earth science both domestically and internationally.

Primary (P) waves are compressional seismic waves that occur during an earthquake. This lesson will cover the properties of these waves and how they have helped us understand the inner workings of the earth.
Create an account

During an earthquake, energy is released as one side of a fault slips past the other. The pressure that had been stored is released and travels radially away from the focus of the earthquake in the form of primary (P) and secondary (S) seismic waves. 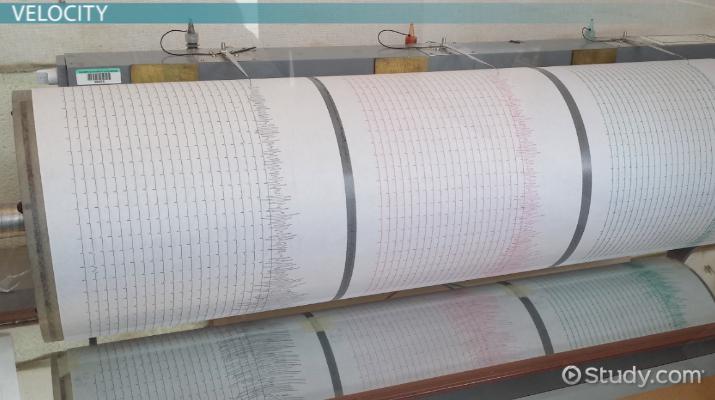 Coming up next: S-Waves: Definition & Examples

P-waves are the fastest moving seismic wave. The velocity of the wave depends on the type of density of the material it is traveling through. At the surface, a primary seismic wave travels at about seven kilometers per second - that's nearly 15,000 mph. As the density increases deeper inside the earth, the speed of the wave also increases. At around 3,000 kilometers, the P-wave travels at nearly 14 kilometers per second.

Then something changes. At around 3,000 kilometers, the crust that we are standing on ends, and the liquid outer core begins; although the P-wave can travel through the liquid, it does so much more slowly. At the outer edge of the outer core, the speed of P-waves drops back down to 7 kilometers per second, slowly increasing until it jumps up to 10 kilometers per second through the inner core.

Of the seismic waves, only P-waves have the ability to move through liquid. While this may not seem too important, this property of P-waves has given us a peek into the earth's center. After the 1906 San Francisco earthquake, seismographs, an instrument designed to record seismic waves, were positioned around the globe to better understand seismic waves.

Subsequent earthquakes occurred, and the seismographs worked as they were supposed to, recording the P-waves. To the surprise of scientists however, there were two distinct areas that wouldn't record P-waves. From the epicenter, P-waves were recorded on seismographs, until 110 degrees away from the epicenter and remain absent until 150 degrees, where they would reappear. Seismologists soon realized the seismic shadow zone was due to the P-waves refracting while traveling through the different layers of the earth.

Here is an example to help. When you put your hand behind a glass of water and it distorts or looks like it's farther away, that is the light bouncing off your hand and refracting (or slowing down) through the water and then refracting (or speeding up) again once out of the water. The same thing is happening with the P-waves through the different layers of the earth.

So, it turns out as the P-waves travel through the earth, they get to the outer core and refract back outwards toward the surface. This causes some areas of the earth, specifically 110 - 150 degrees away from the epicenter, to not experience any seismic activity, otherwise known as a seismic shadow zone.

P-waves, or primary waves, get their name from being the first wave felt or recorded after an earthquake occurs. While they travel faster than other seismic waves, they are the least destructive of all seismic waves. P-waves are unique in their ability to travel through water; this ability has allowed us to study the interior composition of the earth. Refraction of P-waves through the inner and outer core cause a seismic shadow zone at certain areas around the globe.