In this lesson, you will explore the various elements of Palladian architecture and discover how Classical and non-Classical features interplay in these buildings. Then, test your understanding with a brief quiz.
Create an account

As an architect, I can't imagine a much better compliment that having an entire style of architecture named after you. Andrea Palladio was just that influential. A 16th-century Venetian architect, Palladio devoted himself to creating architectural masterpieces that reflected the order, harmony, and reason of Classical architecture: the architectural styles of Ancient Greece and Rome.

Palladio spent years researching the texts and designs of ancient architects, notably the Roman Vitruvius, and was part of a larger movement in the Italian Renaissance committed to classical forms. However, Palladio's style of classical traditions with the introduction of new Renaissance elements was called Palladian architecture, and it has influenced Western nations from France to England to the United States. Palladian architecture was especially popular in the former British colonies, influencing nearly every one of our own national government buildings and national monuments in the US. 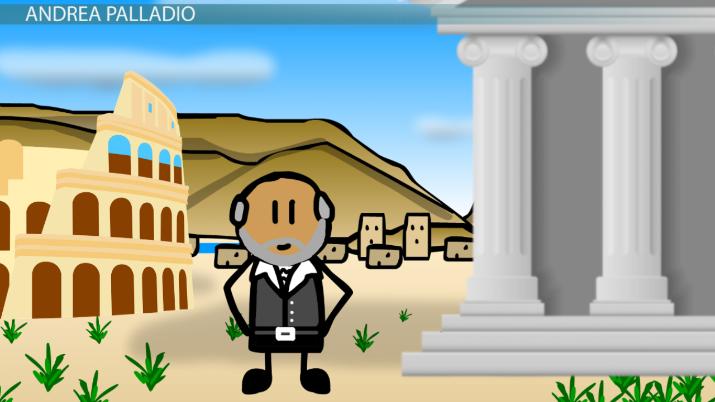 Coming up next: Trends in High Renaissance Mannerism

The basis of Palladian architecture was the use of Classical elements from ancient Roman and Greek architecture, notably a use of balanced, rational, and geometric forms.

A great place to see how Palladio used these themes is in the Villa Rotonda, a large home near Vicenza, Italy. The Villa Rotonda is built as a perfect square, with four identical entryways. The entryways are modeled after a Roman temple, with Ionic columns. Directly over the center of the building is a dome, modeled on the Roman temple called the Pantheon. The entire structure is mathematically perfect, with each part reflecting geometric ratios between other parts, exactly as the Romans would have done. This villa breathes a sense of order, reason, and balance.

Another prominent work of Palladio was San Giorgio Maggiore, a Catholic cathedral in Venice. The interior of San Giorgio is carefully and clearly organized to reflect the most rational and mathematical use of space. Clearly Classical features, such as columns and arches, are highlighted by the immense amount of natural light that reflects off the marble-white surfaces. The interior of San Giorgio is calm, harmonious, and contemplative, creating a meditative place of worship.

These sorts of elements define the classical aspects of Palladian architecture: a rational, mathematic use of classical elements and calm organization of space.

For as much as Palladian architecture reflects Classical themes, Palladio was not an ancient Roman, nor did he want to be. Palladio was living and working in the 16th century and he designed his buildings to reflect the needs and tastes of people at that time.

For example, the Villa Rotonda uses aspects of Roman temples, but its overall form is in no way Roman. It is not a temple, but a large house for a rich Italian to throw parties. The four entrances each face towards a different direction, giving party guests a panoramic view of the beautiful Italian landscape. The functional purpose of the building is what directed its layout. Yes, it is mathematically and rationally designed, but it breaks from Classical traditions in the use of four entryways rather than one, the interior layout focused on creating a good space for parties rather than living or business, and the use of temple designs for a private residence.

San Giorgio also displays this mixture of Classical features and non-Classical elements and purpose. For one, San Giorgio is a Christian cathedral, obviously limiting the pagan elements of purely Classical architectural. Also, while the interior is clearly organized, the exterior is more…irrational. A white façade covers a red building. This façade is based on Roman temples, but rather than being a full entryway, like the Villa Rotonda, Palladio pressed the entire structure onto a nearly flat space, using natural shadows from the protruding columns to create the illusion of depth.

The lack of consistent order reflects other artist movements of 16th century in Italy, notably the Mannerist movement. Together, the Villa Rotonda and San Giorgio reflect the key elements of Palladian architecture. Features of Classical order and harmony are the fundamental designs, but the function and purpose of the building allow for reinterpretation of these Classical elements in new ways.

The classical elements of Palladian architecture include the creation of geometric, ordered, and balanced spaces, complete with Roman arches and columns. Palladian buildings often incorporate themes from Roman temples, including entryways and domes, and frequently reflect perfect mathematic ratios between different parts.

Palladian architecture has remained tremendously influential, especially in the United States, where we still use it on government buildings and national monuments.

When you are finished with the lesson, you should be able to:

The Architecture of the Church of San Giorgio Maggiore