In parallel circuits, current has more than one path to take. Whenever it comes to a junction, it either splits into multiple currents or combines into one current. In this lesson, we will learn how to determine current in loops of parallel circuits.
Create an account

Imagine five people walking single-file through a hallway and they come to two doors leading to two different hallways. If two people go through door A, how many go through door B? The answer is 3. At the end of the hallways, there are two more doors which lead to another hallway. How many people enter the final hallway? All five people! This is an analogy of how current splits and recombines at junctions in parallel circuits. Let's look at how we can mathematically calculate the amount of current in each path. 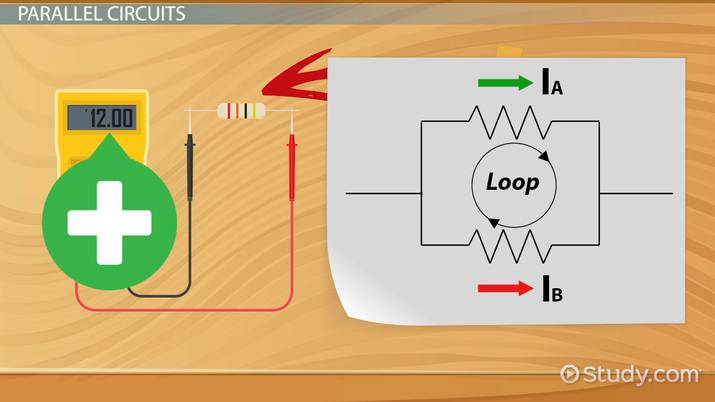 Current leaves the positive terminal of the battery heading for Loop 1. In this next diagram on your screen, the junctions where current splits are circled in green, and where the currents combine into one are circled in red.

Kirchhoff's junction rule is an application of the conservation of electrical charge, and states that current into a junction must equal current out of the junction. Ohm's law states that voltage equals the product of current in amps and resistance in ohms, which can be written as: V = IR.

Kirchhoff's loop rule sums all of the voltages in a closed loop and sets them equal to zero. There's no potential difference at a single point in a circuit. It's like saying there is no change in elevation at a single point on a mountain. We use Ohm's law (IR) to determine the voltages across each resistor. If the loop is in the same direction as the current, the voltage across the resistor is negative. If the loop is in the opposite direction as the current, the voltage is positive.

Let's work an example where we have to determine the currents in the loops of a parallel circuit. Let's take a look at an example.

Here's a prompt: Determine the currents through all of the resistors in the parallel circuit shown here in this third diagram you're looking at on your screen below:

Since we have four unknowns, we need four equations, and we already have two. The chart on your screen below shows the other two equations that come from Kirchhoff's loop rule for Loops 1 and 2.

At this point, the physics is complete. The rest of the problem involves algebra. Let's take each loop individually.

We will multiply the junction rule equation by 30 so the IB will cancel when we add both equations.

Now we can add both equations and solve for IG.

Solving for IG, we get 4 amps. Plugging this back into junction rule for Loop 1, we can solve for IB.

Now, we can work Loop 2 in the same way to determine Ip and Io.

We will multiply the junction rule equation by 10 so the Io will cancel when we add the equations.

Now we can add both equations and solve for IP.

Solving for IP, we get 2 amps. Plugging this back into junction rule for Loop 2, we can solve for Io.

When determining the currents in loops in a parallel circuit, Ohm's law, the junction rule, and the loop rule are used to generate equations including the resistances of the resistors, and the currents as variables. Using algebra, the equations are solved for each current. 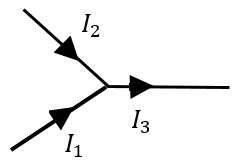 How to Find the Color Code of a 1k Ohm Resistor

What is a Series Circuit? - Definition & Example

How to Find Equivalent Resistance