DaQuita has taught high school mathematics for six years and has a master's degree in secondary mathematics education.

Lines have a specific shape, but there are different types of them according to how they relate to other lines in the same plane. Learn about the different types of lines, including parallel, perpendicular, and transverse lines, and see the formulas you can use to determine the type of line. Updated: 08/19/2021
Create an account

Take a look at your surroundings. Are you sitting at a desk? Are you close to a window with blinds? If you look out that window, can you see the next street or a highway? If you answered yes to any of these questions, then you are surrounded by lines, which are everywhere!

In this lesson, we are going to take a closer look at parallel lines, perpendicular lines and transverse lines. Each of these types of lines are classified as coplanar lines, meaning that they are located on the same plane, which is a flat, two-dimensional surface. Let's examine and practice with each one. 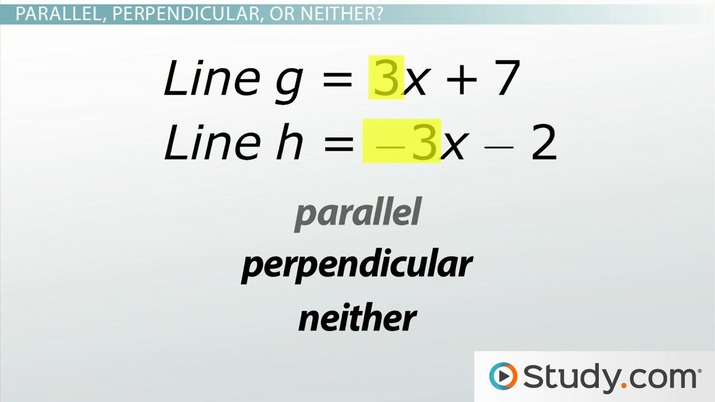 Coming up next: Types of Angles: Vertical, Corresponding, Alternate Interior & Others

Parallel lines are defined as coplanar lines that do not intersect. They have the same slope and, just as the definition states, will never, ever meet at any point. Think about it: since slope is referred to as rise over run, having the same slope means that two lines will rise and run at the exact same rate, ensuring that they will never intersect each other. Let's take a look at real-life examples of parallel lines.

Perpendicular lines are also visible in the real world. Take a look at a desk. Can you see how the top of it lays flat on all the legs? This means that the top of the desk is perpendicular to the legs and forms ninety-degree angles, which keeps things from sliding off of it.

Parallel, Perpendicular or Neither?

Let's begin by looking at their slopes, which are the numbers in front of the x variables. Line g has a slope of three and line h has a slope of negative three. Their slopes are the same number, but one is positive and the other is negative. so they are not exactly the same. For this reason, we know that line g is not parallel to line h. Also, though their slopes are opposites, they are not reciprocals of each other. Therefore, we can also conclude that these two lines are not perpendicular.

By looking in front of the x variables, we see that line j has a slope of four-thirds, and line k has a slope of negative three-fourths. These slopes are not congruent, so the lines cannot be parallel. However, one slope is positive and the other slope is negative. Additionally, these slopes are reciprocals or flipped fractions of each other. Therefore, we can conclude that the lines are perpendicular.

In the real world, transversals are highly visible on street maps. Take a look at this one. Here, you can see that Elm Street is a transversal to Asbury Street, W. Taylor Street and Villa Avenue.

Now, let's practice identifying a transversal. Take a look at the following scenario. Which line is the transversal?

In review, remember that all of the lines we discussed are coplanar. Parallel lines have congruent slopes, perpendicular lines have opposite reciprocal slopes, and to be a transversal, a line must intersect at least two other lines at different points.

From office furniture to highway road maps, lines are everywhere. Whether parallel, perpendicular or transverse, lines provide structure for our everyday lives.

Which two lines are parallel? 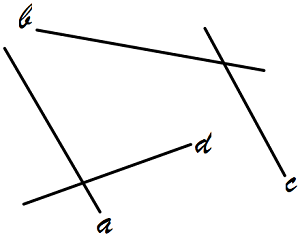 How to Find the Area & Circumference of a Circle

How to Find the Number of Diagonals in a Polygon