View bio
When two organisms have a relationship where one benefits and the other is harmed, it is called parasitism. Examine the types of parasitism, special cases, examples, and defenses against parasitism. Updated: 09/06/2021
Create an account

Parasitism describes a relationship between two organisms where one benefits, and the other is harmed. The parasite is the organism that benefits from the relationship, while the host is harmed by the relationship. Parasites can be a number of things including plants, animals and even viruses and bacteria.

It is useful to know about parasitism because, technically, anything that is benefited while we are harmed is considered a parasite. Yes, that pesky mosquito that keeps biting you just gained an official title. While some of the parasites that affect humans can be a nuisance, such as lice or bedbugs, there are other parasites that can make us really sick, such as a bite from a tick, which can cause Lyme disease, or giardia, which we ingest by drinking contaminated water. 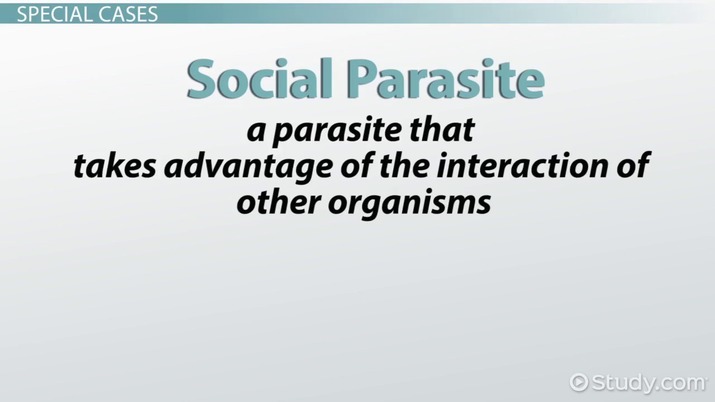 Parasites are classified by how they interact with their host. Overall, parasites are much smaller than their hosts and reproduce at a faster rate.

Parasites that live on their host are termed ectoparasites. Examples of ectoparasites are fleas, ticks and mites. These parasites live on larger animals, like cats, dogs and deer. Parasites that live inside their host are termed endoparasites. These include things like parasitic worms, bacteria and viruses. One interesting case of an endoparasite is the hornworm caterpillar and the braconid wasp. The wasp lays eggs inside the hornworm, which then hatch and kill the host. This relationship is considered beneficial to humans, because hornworms eat the leaves on plants, such as tomatoes, eggplants and potatoes, and ruin a lot of crops for farmers.

An epiparasite is a parasite that feeds on another parasite. A common example of this is a protozoan that lives in the digestive tract of a flea, which then parasitizes a dog or cat.

A social parasite is a parasite that takes advantage of the interaction of other organisms. One example would be a fly taking food away from a colony of ants. The best example of a social parasitism is brood parasitism. This is an interaction where the parasite, typically a bird, deposits their eggs in the nest of another species. The host then 'babysits' the egg in place of the parasite, allowing the parasite to deposit eggs in other nests instead of spending time hatching their own young. Most species of cuckoo bird are brood parasites, and there is even one species of fish (spotted catfish), which parasitizes the 'nest' of another fish species!

In some rare cases, parasitism can be considered beneficial. Tapeworms lay eggs in the intestine of their host and feed off the nutrients from food the host consumes. Because they consume the majority of the nutrients from their hosts' food, the worm grows while their host starts to lose weight. Ingesting tapeworm eggs in order to lose weight has been utilized as a diet option for about a century. Typically, the dieter would then take an antibiotic to kill the worm off. Yuck!

The most common defense against parasitism is behavior. Grooming can eliminate parasites such as ticks and mites. Being careful about what you eat and where you eat it from, are common ways to eliminate foods which can contain parasites, such as tapeworms. However, when that doesn't work, society has developed medicines to combat most parasites, such as worms and bacterial infections.

In this activity, students will be researching different diseases caused by parasites. Students are generally very interested in this topic and their research will expand on the information presented in the lesson.

If students are having trouble thinking of a parasite born disease, have them start with a basic internet search for human parasites. Make sure that students are using quality sources, such as Mayo Clinic, National Health Service, WebMD, or other sources from a news outlet, a scientist, or the government. Some examples of parasitic infections that students might research include malaria, ringworm, or tapeworms.

Now that you've read about the different types of parasites, you're going to research one in depth that causes an infection in humans. For your final product, you can create a slide show online, a poster, a pamphlet, or write an essay of at least 1,000 words. However, whichever product you choose should have the following information:

Mutualism Examples in Animals | What Is Mutualism?

What Are Nematodes? - Definition, Properties & Examples