View bio
In this lesson you will learn what a parliamentary government is, and discover how it functions with examples like Australia and Germany. Then learn some of the advantages and disadvantages of a parliamentary system of government. Updated: 09/16/2020
Create an account

Have you ever wondered what the difference between President and Prime Minister is? Or maybe you've wondered why other countries don't have a President. Well, the answers lie in understanding the differences between a presidential versus a parliamentary system of government. Sometimes in the U.S., we forget that not every democracy looks exactly like ours, and learning how a parliamentary system works will help you understand how other democratic countries like Australia and Germany govern themselves. 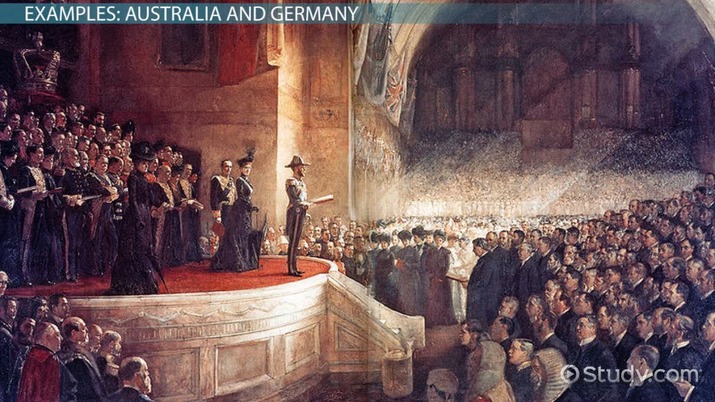 Parliamentary government is a democratic form of government in which the political party that wins the most seats in the legislature or parliament during the federal election forms the government. This majority party chooses a leader to be the Prime Minister or Chancellor, and other high-ranking members of the party make up the cabinet. The minority party forms the opposition, and its job is to challenge the majority party. If no party is able to win a majority in the election, a coalition government will be formed with a few political parties cooperating together.

It's called 'parliamentary government' because all of the power is vested in the parliament. In a presidential system like the United States, the executive branch is separate, and the president is popularly elected by the citizens of the nation. In a parliamentary system, the head of the government is chosen from the parliament, and is often one of the most senior members or ministers in parliament, which is where we get the term 'Prime Minister.' Often in a parliamentary system, the country will have a Head of State, who is a ceremonial figure like the Queen, but does not engage in legislating or politics.

Australia, a member of the British Commonwealth, has a form of parliamentary government that is similar to Great Britain. Its Parliament has two houses; the Senate and the House of Representatives just like the United States Congress. The political party that wins the most seats in the House of Representatives forms the government and chooses the Prime Minister. In Australia, the floor of the Parliament is the site of vigorous debate. The majority and minority parties face off regularly to discuss legislation. There's often a lot of shouting and taunting! The Prime Minister takes part in the debates, and must be prepared to join the fray to propose and defend his or her decisions.

Germany also has a two-house Parliament. The Bundesrat is the upper house like the senate, and the Bundestag is the lower house like the House of Representatives. The majority party in the Bundestag elects a Chancellor who leads the government. Unlike Australia, most debates happen in small committee meetings. Then the committees bring a bill to the plenary chamber where it goes to a vote. That means there's a lot less fighting in the plenary chamber.

One of the biggest advantages to parliamentary government is that it's really efficient. In a Presidential system like the U.S., it's pretty common for the President and the Congress to represent different political parties. In theory, this can be a check on power, but often leads to gridlock. You might remember how this was a huge problem in 2013 when the President and the Congress could not agree on how to solve the debt crisis, and this lead to a government shutdown.

In parliamentary government, the executive and the parliament are unified, and the government can pass laws more quickly and efficiently with its majority. This also means that there's a lot less finger-pointing. If a law is unpopular, the government must take full responsibility, and can't blame the opposition party. The public can hold the majority party accountable for all of its decisions, because it's obvious who made them.

In a presidential system, a President has more power than a Prime Minister, and may become authoritarian. It is also much harder to remove an unpopular President. A Prime Minister must constantly prove themselves worthy of the office. If they fail, they can be removed overnight.

A big disadvantage to this system is that the government can be unstable. Unlike a President, the prime minister or chancellor is elected by the majority party, and can be removed at any time if the majority party loses confidence in that person as leader. For example, in Australia, these leadership spills have occurred several times in the last five years. In 2010, the Prime Minister and leader of the Labor Party, Kevin Rudd, was replaced by Julia Gillard, another member of the Labor party, after they passed a vote of no confidence in him. Julia Gillard survived one leadership spill, but in 2013, Kevin Rudd replaced her as Prime Minister after she was defeated in a vote. Also in February 2015, the Liberal Party took control of the government, and Prime Minister Tony Abbot faced and survived his first leadership spill. However, over in Germany, Angela Merkel is marking her tenth year as Chancellor!

Another disadvantage is that the minority party has much less power, and can be oppressed by the majority. That means opinions held by other smaller parties can be overlooked or rejected in the government.

After watching the lesson on parliamentary governments, apply what you've learned in order to:

Example: In a parliamentary government, the minority party is the opposition to the majority party that is in power.

Write an essay of approximately one to two pages that describes the parliamentary governments of Australia and Germany, and compares and contrasts the two.

Example: Both Australia and Germany have two-house parliaments.

Create a poster, chart, or some other type of graphic organizer that presents the advantages of a parliamentary government.

Example: Efficiency, especially because the legislature and the prime minister or chancellor are united.

Example: There can be instability, especially since the prime minister or chancellor can be removed from power at the request of the majority party.

Make a list of at least five countries that have parliamentary governments.

Tip: Refer to the map presented in the lesson!

The History and Structure of the Parliamentary System of Government

The Judicial Branch of the Democratic Republic of Italy

Constitutional Origins of the Presidency