In order for your cells to survive, nutrients and other substances must be allowed to move in and out across the cell membrane. Sometimes this requires energy (active transport), and sometimes it does not (passive transport). Updated: 01/15/2020
Create an account

I am a big sports fan. For me, there is nothing more exciting than the roar of a crowd as a football player makes a great catch. Large football stadiums can hold more than 100,000 people. The flow of fans entering a stadium is controlled by gates. As game time approaches, crowds start to form in the parking lot outside the stadium gates. When the gates open, the hordes of fans move into the empty stadium seats. This is a fairly easy process because the fans are moving from the highly populated parking lot to the less populated stadium. We call this moving with the concentration gradient. A concentration gradient is a measurement of how the concentration or amount of a substance differs between two areas. Moving with a concentration gradient doesn't require much effort or energy; you are just kind of going with the flow.

But, what if one of the fans gets inside the stadium gate and then realizes that he left his big foam finger in the car? He would have to move back through the gate against the concentration gradient. This would require a lot of energy. Much like fans have to move into and out of a stadium to support their team, substances must move into and out of your cells to support their survival. To do so, substances must cross through the membrane that surrounds the cell. Sometimes this movement requires energy, and sometimes it does not. 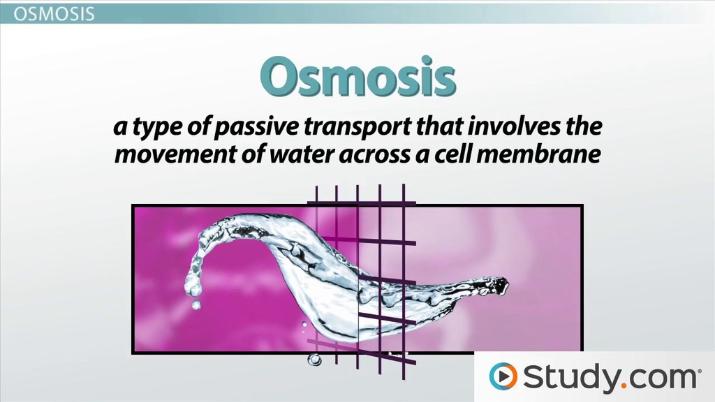 Coming up next: Osmosis, Diffusion and Saturation

We use the term passive transport for transport across the cell membrane that does not require energy. The cell membrane acts as a barrier to separate the contents of your cell from the surrounding environment. This membrane doesn't allow every substance to pass through. However, there are some small, uncharged substances, like oxygen and carbon dioxide, that can cross the cell membrane unaided. These substances move by simple diffusion, which is the movement of substances from areas of higher concentration to lower concentration without assistance. With simple diffusion substances move without energy or help, it would be like entering the stadium without having to pass through the gates.

Another type of passive transport is facilitated diffusion. If something is 'facilitated,' it has help, so facilitated diffusion is the movement of substances from areas of higher concentration to lower concentration with assistance. This is needed for substances that are large or not compatible with a cell membrane. The assistance comes from proteins embedded in the cell membrane. These transport proteins have one end inside the cell and the other end outside. They act as a channel or carrier allowing the passage of needed substances that can't diffuse on their own. This is similar to the gates of the stadium that ushered in the sports fans.

Osmosis is a type of passive transport that involves the movement of water across a cell membrane. Osmosis helps even out the concentration of solutes or dissolved substances without having to move the solutes themselves. Let's look at an example. In this cell, we see more solutes inside compared to outside. To balance the concentration of solutes, we could either use a lot of energy to move the solutes or passively allow water to cross the cell membrane using osmosis. Your cells like easy, so they are going to choose osmosis. In this case, water moves into the cell causing the cell to swell. Osmosis continues until the inside and outside of the cell have the same concentration of solutes.

Simple diffusion, facilitated diffusion and osmosis are passive movements. They do not require energy because substances are moved along the concentration gradient. However, there are times when energy is required to move substances against a concentration gradient. This process is called active transport. It's what our sports fan required when he forgot his big foam finger and had to fight his way back to the parking lot.

Active transport is seen in your nerve cells. Transport proteins embedded in the nerve cell pump sodium and potassium into and out of the cell. This active transport of sodium and potassium ions across a nerve cell membrane is referred to as the sodium-potassium pump. Sodium is pumped out of the cell to an environment where its concentration is higher. Potassium also moves against its concentration gradient, except it is pumped into the cell. These actions require the energy source ATP. The resulting concentration of ions inside and outside the cell seem are somewhat imbalanced. However, this state is needed to allow the nerve cell to conduct its signal.

We also learned about active transport, which is when energy is required to move substances against a concentration gradient. We specifically looked at the sodium-potassium pump, which is the active transport of sodium and potassium ions across a nerve cell membrane.

By the time you are done with this lesson, you should be able to:

Organelles: Internal Components of a Cell

Overview of Cellular Respiration & Its Steps

The Defining Characteristics of Living Organisms