Passive immunity occurs when an individual receives antibodies to fight off an infection or disease. Learn about the definition, real-world examples, and types of passive immunity. Updated: 10/14/2021
Create an account

What is Passive Immunity?

Immunity refers to being protected or having a resistance to a particular illness or disease. You are immune to a disease or illness when your body creates antibodies to fight off the disease. Antibodies are blood proteins in your body that deactivate an infectious agent.

Wouldn't it be great if we could just get passive immunity to every disease without ever having to experience the disease itself? That would be nice, but there is a down side to it. Passive immunity is immediate, but it only lasts for a short time - a few weeks to 3 months - because your body doesn't know how to make the antibodies. So how do we get passive immunity? 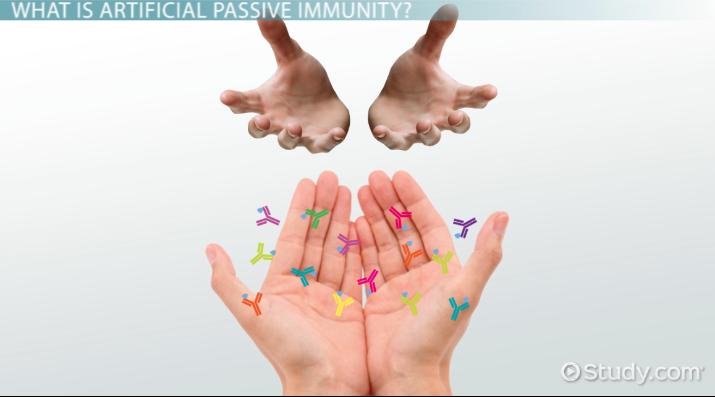 Try it now
Back
Coming up next: What Are Antibodies? - Definition, Function & Types

What Is Natural Passive Immunity?

There are two main ways that passive immunity is acquired. One way is experienced by babies worldwide every day during fetal development. The baby acquires the antibodies in the mother's body, which she has created over her lifetime. This is called natural passive immunity. So see? We all experienced a little passive immunity at least once in life. Thanks, Mom!

There is another added benefit for babies that are breastfed. The first milk to come out is also packed with antibodies from the mother's body. This is a lot of the reason why pediatricians recommend breastfeeding, and why studies have shown that breastfed babies are healthier overall. The antibodies circulate for about 6 weeks and then they are no longer in the blood.

Unfortunately, you're past that point in life now, and that immunity is gone, so let's look at another way that passive immunity can be received.

What Is Artificial Passive Immunity?

You've probably heard of Ebola by this point. There have been numerous reports about how there were only a few doses of the antibody available to treat Ebola patients. Patients began coming to the U.S. to be treated, and there were more patients than there were doses of treatment. So what did the doctors employ in order to treat the remaining patients? They used artificial passive immunity, which occurs when the antibodies are taken from one person and given to someone else who needs them.