Perceived control describes the amount of control people believe they have over a situation. This phenomenon has stress-reduction and mental health benefits. Explore perceived control's definition and its relation to stress and health. Updated: 09/14/2021
Create an account

What Is Perceived Control?

Imagine that you have a really important test coming up in a few days. You're trying to study, but the topic seems really hard, and the ideas that you felt like you understood in class are suddenly really confusing. In the midst of all of this, your professor makes a mean comment to you, and you begin to wonder if he may have it out for you.

There are several things in that scenario that might cause you stress: the test, your confusion, your professor's comment. What if I told you that you could choose whether you took a challenging version of the test or an easier one? What if you knew that studying an extra thirty minutes a day would completely clear up your confusion?

Think of it this way: Maybe studying an extra half hour a day will clear up your confusion, and maybe it won't. Whether your extra studying will make things clear to you is your actual control of the situation. This might be very low; you might not get any benefit out of the extra half hour of studying. But, if you believe that it will help you understand better, then your perceived control is high. 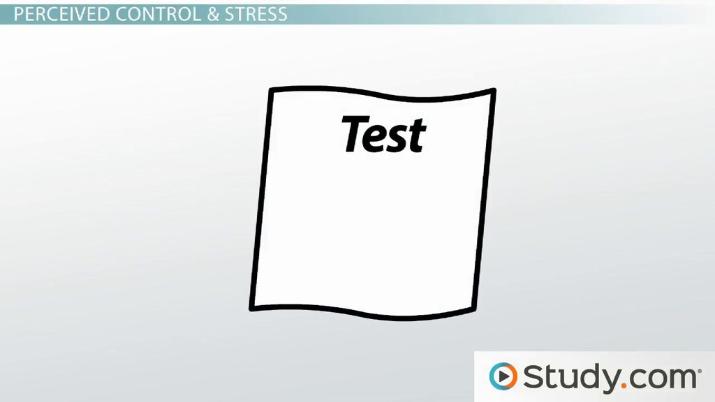 Try it now
Back
Coming up next: Learned Helplessness: Seligman's Theory and Depression

Believe it or not, social psychologists have found that perceived control is more important than actual control in reducing stress. Think about the situation above: You were stressed because of the upcoming test, your confusion over the subject area, and your professor's comments. If you felt that the extra study time each day would clarify the concepts from class but that nothing you could do would change your professor's grudge against you, which would be more stressful for you?

Besides a reduction in stress, perceived control has many other health benefits. Studies have been done on nursing homes that give residents a sense of control (for example, by allowing residents to decide how to arrange their rooms). These studies proved that residents are less likely to suffer from depression and are even likely to live longer and need less medication than residents that do not have perceived control over their environment!

Also, when control is emphasized too much in patients with illnesses, such as cancer, the patients can begin to blame themselves for their illness. After all, if they have control, shouldn't they be able to get better more quickly? One way to avoid this side effect is to emphasize control over their emotional reactions to the disease rather than the actual disease and recovery time. In other words, a patient who feels like she can control her attitude about her cancer is better off than a patient who feels like he should be able to control how quickly he recovers from cancer.

How much control we believe we have is in many cases more important than how much control we actually have. Perceived control is the extent to which we believe we have control over a situation. It can help reduce stress and offer many other health benefits. Loss of perceived control and control being too emphasized can have adverse health consequences, though.

At the conclusion of this lesson, you'll be able to:

Cognitive Dissonance Experiments | What was Festinger and Carlsmith's Experiment?

Homeostasis in Psychology: Overview & Theory | What is Homeostasis?