Bruce Tuckman identified four stages of group development in 1965: forming, storming, norming,_and performing. He added a fifth stage called adjourning in 1977. Tuckman suggested that groups move through these stages in sequential order and that the length of each stage varies from group to group. Once a group successfully addresses the key challenges in each stage, it is ready to move on to the next. This lesson covers the performing stage of group development, when groups reach their peak performance level. Be sure to check out our other lesson on the forming, storming, and norming stages too, perhaps even before delving too deeply into instruction about this fourth stage in Tuckman's model. 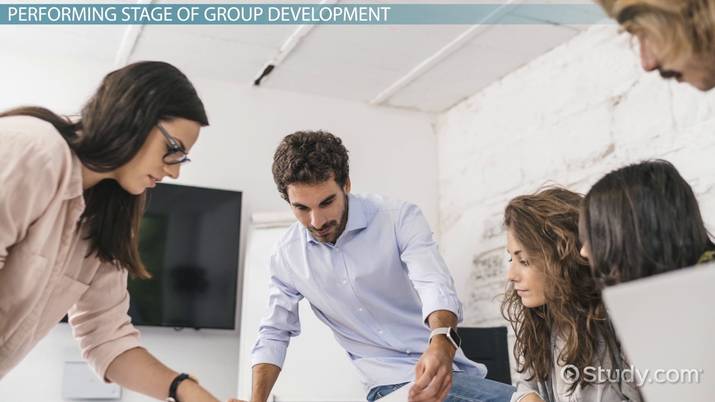 Coming up next: Personal Mastery and Peter Senge: Definition & Examples

Perhaps you've been part of a group that played a vital role in helping an organization accomplish something important. Such accomplishments often occur during the performing stage of group development. A group or team that reaches the performing stage displays a level of competence, trust, and experience that is less apparent in the earlier stages of group development. The group is mature and able to solve problems with minimal supervision. Team leaders readily delegate tasks to the group. Strong relationships among team members facilitate a smooth flow of work and the members are willing to support and assist each other. All of these characteristics facilitate peak performance during the fourth stage of group development.

A group that has reached the performing stage of group development is highly cohesive. This means the members are committed to work cooperatively to achieve the group's goals. The group routinely accepts delegated tasks and the members stay focused on fulfilling the group's mission. A cohesive group still has conflicts and disagreements, but it can resolve them with minimal disruption to the group's activities.

A group can move in different possible directions from the performing stage of group development. If the group was created for a specific task or project, the group will be ready to move to the adjourning stage, when it completes its work. However, some groups are permanent or exist for very long-term projects. If this is the case, the group may remain in the performing stage for an extended period of time. It is also possible that a group will cycle back to an earlier group development stage. This can happen when new problems, leaders or group members are introduced.

Some scholars have noted that not every group will move through the stages of Tuckman's model in a linear fashion. Various challenges can trigger movement back to an earlier development stage. Because the model addresses human behavior, it is unrealistic to expect groups to precisely fit the characteristics of each development stage. It can also be hard to tell which stage a group is in and it is common to have some overlap between the stages. However, Tuckman's first four stages of group development describe the most typical path to high-level group performance. Those responsible for team development can use Tuckman's model to help guide the team through each of the stages.

Why Teams Are More Effective Than Groups

What is Distributive Bargaining? - Definition & Examples

What Are Group Dynamics? - Definition & Theory

What is a Consent Form? - Examples & Concept

What Is Offshoring? - Definition, Advantages & Disadvantages