View bio
In this lesson, we will look at the six periods of world history. We will learn the defining characteristics of each and highlight the major themes associated with each period.
Create an account

The Gilded Age. The Bronze Age. The Enlightenment Era. The Industrial Revolution. The Neolithic Revolution. What do these all have in common? Well, they are all periods or eras of history. There are many different ways to divide up, or classify, history. For example, historical time is divided between B.C. (Before Christ) and A.D. (Anno Domini). More recently, it has become popular to use the term B.C.E. (Before the Common Era) and C.E. (Common Era), but the idea is the same. Another common way world history is divided is into three distinct ages or periods: Ancient History (3600 B.C.-500 A.D.), the Middle Ages (500-1500 A.D.), and the Modern Age (1500-present). 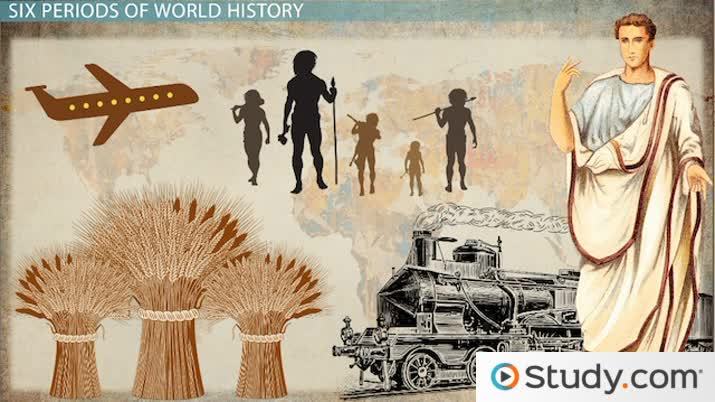 Coming up next: What is a Civilization? - Definition & Common Elements

AP World History divides history up into six periods. Let's take an in-depth look at these six periods, which include: Period 1 - Technological and Environmental Transformations, from 8000 B.C. to 600 B.C.; Period 2 - Organization and Reorganization of Human Societies, from 600 B.C. to 600 A.D.; Period 3 - Regional and Transregional Interactions, from 600 to 1450; Period 4 - Global Interactions, from 1450 to 1750; Period 5 - Industrialization and Global Integration, from 1750 to 1900; and Period 6 - Accelerated Global Change and Realignments, from 1900 to the present. Each period has its own distinct characteristics. Let's take a look at each of the six periods and learn about their defining characteristics.

This period draws attention to a number of important themes concerning mankind's early history. During the Paleolithic Period, humans migrated throughout various parts of the world. We can call this 'the peopling of the Earth.' During the Paleolithic Period, humans relied on primitive stone tools to hunt for food. They also gathered food. For example, they might pick berries. Humans had not developed sophisticated agriculture yet.

A term associated with Period 1 is big geography. Big geography is exactly what it sounds like. Big geography is the global view of world history. It concerns the peopling of the Earth, where different groups of people settled and why, and how these different people groups interact with one another.

About 10,000 years ago, a major shift in human development took place. We call this the Neolithic Revolution. Humans in various parts of the world developed settled agriculture. This was a monumental change. Instead of wandering around hunting and gathering food, humans could now grow their own. They also began pastoralization, or raising livestock. This helped lead to permanent settlements and the rise of civilizations.

This period concerns the rise of powerful early civilizations, such as the Greek and Roman empires. During this period, religious, political, and ethnic differences became pronounced, dividing humans into a host of different groups. Belief systems and culture became codified. Civilizations became more advanced as the state emerged as a powerful entity. Increasingly, people groups became subjugated to other people groups. Transregional trade also became important, as groups from Europe, for example, traded with Asian groups via the Silk Road.

This period emphasizes the continued advances in commerce and communication throughout various world regions. During this period, cross-cultural interactions led to the diffusion of new ideas and technologies. The state assumed a central role in promoting commerce. During this time, Islam, a religion based on the teaching of the prophet Muhammad, emerged in the Arabian peninsula. Clashes between Christians and Muslims, epitomized by the Crusades, became common. Innovations in industry and agriculture spread throughout Eurasia and Africa.

This was a pretty interesting period because during this time people began to explore globally, not just regionally. Interactions between the Western and Eastern Hemispheres via oceanic voyages is the central theme of this period. These interactions resulted in widespread imperialism, which is basically forceful empire building. Colonization of the Americas by European powers was another major theme of this period, as was maritime exploration. New weapon technology in the form of guns and canons allowed rulers to maintain power.

Period 5 - Industrialization and Global Integration, from 1750 to 1900

This period concerns, you guessed it, the rise of industry and its diffusion throughout the world changed the way goods and services were produced and brought about widespread capitalism. Capitalism is an economic system in which investment in and ownership of the means of production, distribution, and exchange of wealth is made and maintained chiefly by private individuals or parties (as opposed to the state). The growth of capitalism led to alternative economic systems, such as Marxism. Industrialization spurred new technological advances such as steamboats, railroads, and the telegraph. Nationalism and revolution were also reoccurring themes during this time.

Period 6 - Accelerating Global Change and Realignments, from 1900 to the present

Throughout this period, rapid advances in science resulted in new ideas about the universe and new technological advances. New modes of transportation, such as the automobile and the airplane, dramatically altered society. Advances in gender equality were made. In World War I and II, nations rose up against nations, fueled by political and ethnic tension. New nations emerged from the ashes of war. Themes of expression and individuality continued to dominate culture.

Phew! We just went through 10,000 years in a few moments! Is your brain spinning? Time for review. We won't be reviewing all six periods, because, well, that would be redundant since we just explored each in detail. Instead, let's highlight some of the key terms contained in this lesson:

Once you are done with this lesson you should be able to:

Prompts About Periods of World History:

Example: The Modern Age refers to 1500 to the present.

Make a poster, chart, or some other type of graphic organizer that lists and briefly describes the six periods of AP world history. Make sure you list the dates of each period and note the characteristics of each.

Example: Period 3, the period of Regional and Transregional Interactions, lasted from 600CE-1450 CE, and saw the growth of the Islamic religion.

In at least one page, write an essay that describes Period 1 of the Six Periods of World History mentioned in the lesson. Make sure that your essay explains the significance of the Neolithic Revolution, as well as the concept of big geography.

Write an essay of at least three to four paragraphs that describes the characteristics of Periods 2 and 3 of world history. It might be helpful to compare and contrast these two periods.

Example: Trade was important in Period 2 and increased in importance in Period 3.

In approximately one to two pages, write an essay that explains the themes in Periods 4, 5, and 6 of world history. It might be helpful to discuss each period's similarities and differences. Also make sure that your essay defines capitalism and imperialism, and explains how these concepts have been integral in world history.

Example: In Period 4, seafaring exploration led to a new awareness of the world and also to colonization.

Periods of World History: Overviews of Eras from 8000 B.C.E to the Present
Related Study Materials

The Great Crusades: History and Timeline

How to Master the Short-Answer Questions on the AP U.S. History Exam

The Creation of the United Kingdom and the Incorporation of Ireland

The Investiture Conflict: Rulers vs. the Centralized Church