Building a robust vocabulary of words to describe others is important when learning another language. Explore, define, and practice a variety of Spanish vocabulary for describing personality traits, including the expression 'Buena gente'. Updated: 08/27/2021
Create an account

Hola! Today is all about personalidad. Are you interesting, intelligent, sporty, or lazy? Do you talk and talk, or are you quiet and serious? Vamos! Let's find out how to describe our personalities and how to use the popular expression 'buena gente.' 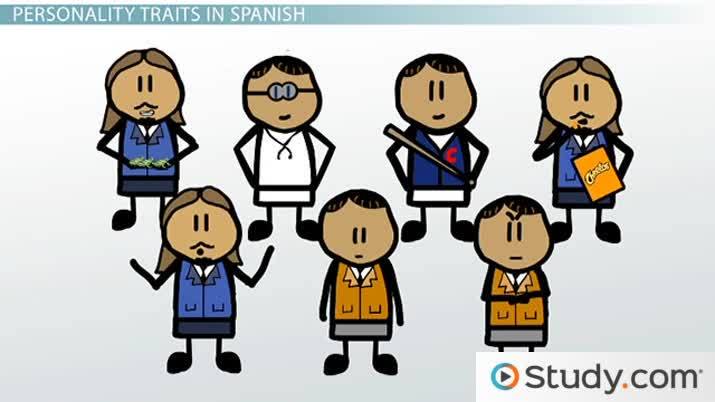 Coming up next: Spanish Vocabulary for Physical Traits

This is Mateo. He's a nice boy who's always generous, sharing his morning donuts with the entire class. He's also very smart. He makes good grades and works hard, but he's sort of quiet and serious. Even though he's a little shy, he has lots of friends and plays sports.

This is Marco. He's different from Mateo. He'll talk your ear off, but he doesn't do so well in school. He's a little lazy, and he can act a little silly, but he's a good guy. And he has an interesting hobby: he collects ranas (frogs)! He has about 20 ranas in his house, and sometimes, he brings one to school in his mochila (backpack). Hm...he must have a mamá maravillosa!

Okay, let's go back to our 'buena gente' expression for a moment. Buena gente is a very popular phrase that you can start using today. It means 'good people,' literally, but can be used for both one person and many people - the exact same way some English speakers use it. As in, 'Mark? Yeah, he's 'good people.' It describes friends and family who have good hearts. Marco es buena gente means 'Marco is a good guy' who can be trusted.

Ok, let's practice a bit! You'll see pictures of Mateo and Marco displaying their personalidades and two words to choose from to describe the personality trait shown.

So, what do you think? Are you interesante, deportista, amigable? Are you buena gente? I hope so! Here's a comprehensive list of the vocab from today. Let's say them one more time:

Vocabulary is so important when you're learning a new language. Without words, you can't communicate, so learn as many as you can. Make flashcards. Try sticking Post-Its on walls, doors, and mirrors. Make Spanish vocabulary a part of your life! Now you know how to describe your personalidad, the word mochila and the word rana! Until next time, adiós!

Once you have watched this lesson, you should be able to recall the Spanish words for many personality traits, as well as the meaning of 'buena gente.'

What's the opposite of 'hablador?'

Practice Reading a Menu in Spanish

Spanish Vocabulary: Learning the Rooms in the House

Spanish Vocabulary: Activities in the City

Spanish Vocabulary: The Names of Professions

Spanish 105: Spanish for the Workplace