'Have you got a brook in your little heart,

And blushing birds go down to drink,

And shadows tremble so?'

Pretty isn't it? Obviously, Emily Dickinson doesn't think flowers can actually be bashful or that birds can blush and shadows can tremble. She's being poetic, or, to be more precise, she's using personification.

Personification is a type of figurative language where animals, inanimate objects, and ideas are given human characteristics. Only in literature (and Disney cartoons) are flowers bashful and birds blushing, with rosy cheeks and all.

We use personification all the time in our everyday speech. We ascribe human-like emotions and desires to almost everything, from a storm's 'unrelenting attack' to time 'marching on.' 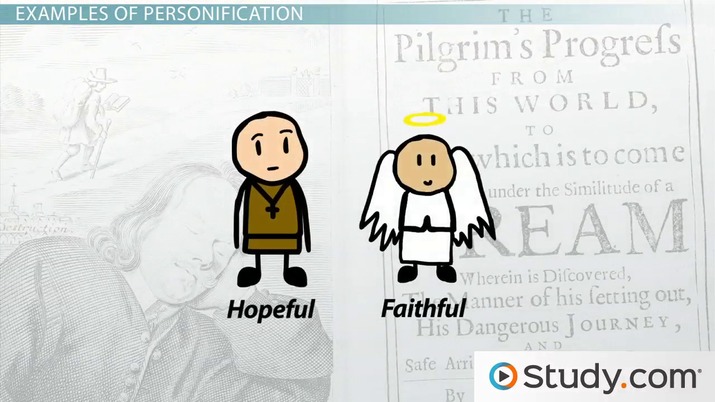 Coming up next: Types of Irony: Examples & Definitions

Personification shows up - see what I did there? - in lots of different ways in literature. Henry Wadsworth Longfellow's long poem 'Paul Revere's Ride' (from 1860) also contains personification used as a poetic device.

Revere was one of the express riders responsible for letting American revolutionaries know that British troops were on their way to Lexington, Massachusetts, riding across the countryside and into American history books.

'It was one by the village clock,

When he galloped into Lexington.

He saw the gilded weathercock

Swim in the moonlight as he passed,

And the meeting-house windows, blank and bare,

Gaze at him with a spectral glare,

As if they already stood aghast

At the bloody work they would look upon.'

Take a minute and stop the video. See if you can spot the personification in there. The rooster weathervane (or 'gilded weathercock') swims while the 'meeting-house windows, blank and bare,/Gaze at him with spectral glare.' Longfellow takes it one step further here, imagining the windows reacting to the bloodshed of the coming battle.

It is also not uncommon for the devil to be personified through different characters, from the Grim Reaper to a slick businessman. Markus Zusak's 2006 novel, 'The Book Thief', is narrated by Death himself, a fitting choice since the story takes place in Nazi Germany:

'I could introduce myself properly, but it's not really necessary. You will know me well enough and soon enough, depending on a diverse range of variables. It suffices to say that at some point in time, I will be standing over you, as genially as possible. Your soul will be in my arms. A color will be perched on my shoulder. I will carry you gently away.'

Another literary device used by writers is apostrophe. Not to be confused with the punctuation mark used in contractions (like 'don't') and to show possession (like 'the student's grade'), this apostrophe is a figure of speech, where a character addresses either an object, idea, or imaginary person as if they were there in the room with them.

At the very end of Shakespeare's 'Romeo and Juliet,' Juliet, seeing that there is no poison left to take her own life, decides to use Romeo's discarded dagger.

This is thy sheath; there rust, and let me die.'

As you can see, Juliet addresses the dagger directly as if it was a character there to hear her.

In the Gothic novel 'Frankenstein' (1818) by Mary Shelley, one of the book's narrators addresses the 'stars and clouds and winds' as if they were characters there to hear her pleas:

'Oh! Stars and clouds and winds, ye are all about to mock me; if ye really pity me, crush sensation and memory; let me become as naught; but if not, depart, and depart, and leave me in darkness.'

Personification is a literary device where writers describe non-human animals, objects, and ideas using human characteristics. For example, 'The stars danced in the sky' personifies stars by describing them as dancing. Apostrophe is a literary technique where a character addresses an imaginary person, object, or idea as if they were a person. So a character saying, 'Oh stars, won't you dance with me' would be an example of an author using apostrophe.

This lesson should prepare you to differentiate between personification and apostrophe and provide examples of each.

How to Identify Errors in Comparison, Correlation & Parallelism

What is the Difference Between Transferred Epithet & Personification?

What Is an Interrogative Sentence? | Example & Usage