Jennifer taught 9th grade ELA and AP Literature for over 8 years. She has a dual master's in English Literature and Teaching Secondary Ed from Simmons University and a BS in Psychology. She is a full-time senior content writer and certified AP Test Reader.

The Art of Persuasion

What do you do when you want something from your parents? Do you ask over and over again? Do you follow them around the house begging? Or do you persuade them to get what you want? This lesson will probably help you understand the topic of persuasion in regards to persuasive journalism. However, you probably know more than you think.

Persuasion is the act of convincing someone to share your views or values. You probably persuade many people on a daily basis without even knowing it. Maybe it's by persuading the teacher to not give homework over the long weekend or persuading your friend to switch snacks at lunch. In any case, think about these moments and realize most of your day may consist of this behavior.

In this lesson, we won't just learn about persuasion, but instead, learn about persuasive journalism. When we think of the word ''persuasion,'' synonyms that come to mind are ''urge,'' ''encourage,'' ''coax,'' ''tempt,'' ''sway'' and ''influence,'' to name a few. We know journalism has to do with reporting the news. So, if we put these words together, it seems persuasive journalism is the way in which journalists convince or influence their audiences about a specific topic.

Let's take a look at the format journalists use when constructing their work. 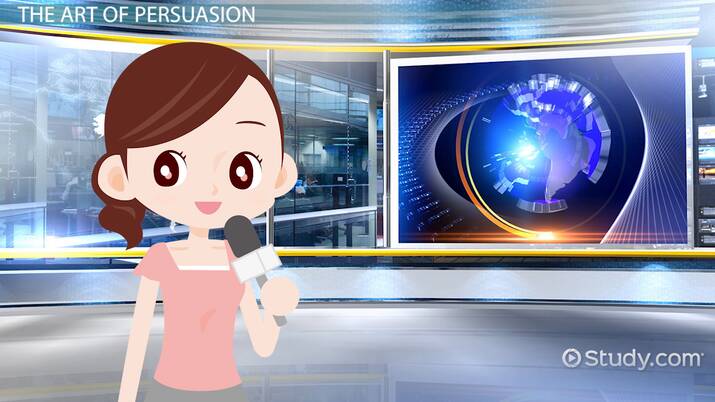 Try it now
Back
Coming up next: What Is Folklore? - Definition, Legends & Myths

When we persuade, we're making claims about people, ideas or experiences and then providing evidence to support those claims. For example, a claim could look like this: ''Mom, I want to go to a movie with Justin.''

Mom may say ''no,'' but you could reinforce your claim with evidence to support your overall argument. Maybe you tell mom you finished your homework for the weekend, Justin's mom is picking you up, and you have $10 from completing your chores last weekend to pay for it. All of this evidence may help persuade mom into letting you go.

Next comes the reasoning for those claims. The reasoning can be done in several persuasive ways. By providing the evidence, and maybe offering to do something else for your mom, you can show her all the reasons why you should go to the movies. In this case, you could reason with Mom by telling her she won't have to provide anything, such as money and a ride, and she will get a night off from being a mom.

How does asking mom for a movie trip help you understand persuasive journalism? The same format is presented in the news. Journalists make claims regarding politics, events, and people, and provide evidence and reasoning as to why you should believe what they're reporting.

Let's take a look at some of the techniques journalists use when they write to get a better understanding of the art.

Now that we have an understanding about persuasive writing format, let's take a look at some devices journalists use in their writing.

So, what do you think? Have you mastered the art of persuasion when it comes to journalism? Persuasion is the act of influencing someone else to share your values or beliefs. It can be used in journalism to convince readers or viewers to do the same. Journalists make claims about a person, place or event and provide evidence and reasoning to make their argument to the audience. By doing so, they hope to change their minds or reinforce current ideas.

We learned how journalists use these persuasive techniques, which include rhetorical questions, which are asked in order to create a dramatic effect and not necessarily to be answered; and testimonials, which is a formal statement made by someone with the intention of supporting or contradicting another person's character; along with emotional appeals, which is when someone uses charged language to make the audience or reader have an emotional reaction to the claims presented; persuasive pronouns, which can be used to make your reader feel like they're a part of the topic at hand or used in the opposite fashion; and expert opinions, which is testimony by an expert in his or her field that connects to the topic at hand. Journalists use these techniques to help reinforce their points and get you to believe in their argument.

The Duchess of Malfi by John Webster | Summary, Themes & Analysis

Journalistic Writing Style, Features & Examples | What is a Journalism?

The Duchess of Malfi by John Webster | Summary, Themes & Analysis

Journalistic Writing Style, Features & Examples | What is a Journalism?