Copyright
Lesson Transcript
Instructor: Brekke Peterson Munks
Phylum Ascomycota is a type of fungus that can present in complex varieties of shapes. Learn more about the definition of Ascomycota and discover examples of where these fungi are observed in relation to other organisms, both plants, and animals. Updated: 11/03/2021
Create an account

What Is an Ascomycota?

Have you ever seen a fungal truffle? Have you eaten one? Fungal truffles are part of a group of fungi called ascomycota. Ascomycota literally translates to 'sac fungi'; however, these fungi come in many forms or shapes, such as spongy, long, skinny cylinders, cup-shaped, coral-like, and others.

Fungi is one of six kingdoms used to classify organisms. Within each kingdom are subcategories that further organize organisms. Ascomycota is one of these subgroups categorized as a phylum. A phylum simply organizes organisms from a kingdom into subcategories based on similar characteristics. Ascomycota form the largest phylum within fungi and live all over the Earth. 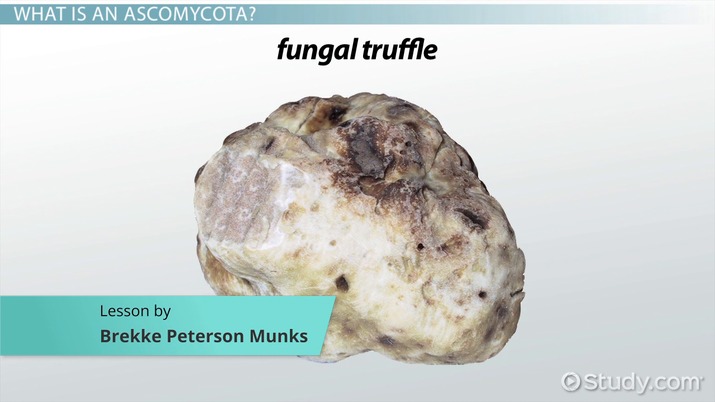 Coming up next: Animal Body Plans: Classifications and Features

In the alternative medicine world, a prime example of Ascomycota fungi is the Cordyceps ascomycota, which is used to help support the immune system. These organisms grow on other creatures like insects and worms, and can be red, yellow, brown or orange.

If you are foodie you might have had the pleasure of eating morel mushrooms. These ascomycota are gathered after forests burn and are often available at specialty gourmet shops.

Other examples of ascomycota include those that grow with lichen in the alpine and tundra regions of the world. These have close relationships with algae where the fungi and algae swap nutrients for survival without hindering the other, which is known as a symbiotic relationship.

There are also ascomycota that are carnivorous and eat other organisms that don't photosynthesize, such as ringworms, amoeba, protists, and other creatures that live in the soil. They trap these creates by forming loop structures around them like handcuffs.

There are also parasitic Ascomycota such as the blue stain fungi of pine trees. These ascomycota create a wonderful blue pattern in the wood of pine trees, but ultimately cause the trees to die.

Have you ever found a blue mold growing on bread? This mold, which is also known as penicillium, is used in the production of both food and medicine. If you have ever made bread, the yeast that's used to help make the bread rise is part of the ascomycota phylum too. Additionally, any fermented food or beverage has also come into contact with ascomycota. Many plant pathogens that cause crop disease are ascomycota fungi too, such as, ergot and aspergillus in peanuts.

Ascomycota is the largest group of fungi on the planet that lives virtually everywhere. This fungi comes in many shapes and sizes, can be edible, can eat other organisms, and can survive in the unfavorable conditions of the alpine and tundra regions of the world. Common examples of ascomycota are Cordyceps, morels mushrooms, blue stain tree fungi, ergot, and those associated with lichen that form symbiotic relationships with algae.

Gametophyte Generations Explanation & Examples | What is a Gametophyte?