What Is a Physical Model?

Have you ever played with a model? Like a model helicopter, building toys, or an exhibit at a science museum? Models help us visualize aspects of the world, and are used for fun, decoration, or to illustrate ideas. But did you know that physical models can also be used in science?

A physical model is a constructed copy of an object that is designed to represent that object. It can be larger than the object, smaller, or the same size. They can have moving parts, have water flowing through them, or even be robotic. They are used for experiments, visualization, or for education in museums and are incredibly useful to scientists and nonscientists alike.

In science, the most common kind of model is not actually physical; scientists use conceptual models to visualize and represent things. This could be as simple as a diagrams on paper, or as complex as a bunch of math equations. But sometimes looking at a page of equations makes it hard to visualize, even when you really know a lot about mathematics. That's where a physical model can be useful: it can allow you to picture something when your imagination can't. 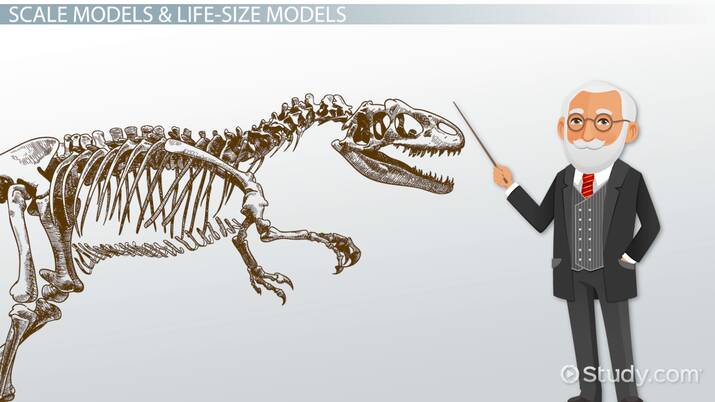 Coming up next: Types of Mathematical Models

There are two main types of physical model: scale models and life-size models.

A scale model is a model that isn't the normal size. They're usually smaller, but they can also be larger. While the size is different, the proportions should be the same as the real thing.

For example, you might create a model of a building that's only 3 meters tall. If the width of the real building is half the height, your model should be 1.5 meters wide to also be half its height. Scale models are used when there isn't enough money to build a full-size model, or if the real object is too large (such as a skyscraper).

A life-size model is exactly what it sounds like: it's the exact size of the thing it's representing. Some classrooms have life-size models of human skeletons or muscles so students can more accurately understand human anatomy. A life-size model can be extremely expensive to produce, but it allows you to do experiments on something that is pretty much the same as the real thing. Scientists dissected a life-size T-Rex model to try and get a better understanding of the dinosaur's digestive system and habits.

There are several advantages to physical models. They allow you to try things out for real that would be impossible outside of a model. For example, you could create a model of a house, and then destroy it in different ways to see how a fire or flood affected the building materials. Or you could simulate an earthquake on a model of a city, which would be impossible and dangerous to do with a real city.

Sometimes physical models are more accurate than computers, especially in the case of chaotic things like fluid flow. If you're studying how water will flow around the sides of a boat, or through a complex network of pipes, you really can't beat a physical model.

Another advantage is that physical models are safer for certain kinds of experiments. One of the more common examples of physical models are crash test dummies. Before a car makes it onto a road they're tested by simulating all kinds of crashes, and seeing the effect it has on human-sized dummies in the car. This certainly isn't something you could do safely with actual people.

Last of all, physical models are great for visualization and education. Nobody can really see the atom, because it's too small. And an image of the whole solar system with all the planets in view is not practical, because the planets are tiny compared to the distances between them. The models can be used to educate people and help them visualize things that are hard to picture.

Physical models do have disadvantages. Physical models are expensive to produce, especially compared to computer simulations or simple mathematical equations. If you destroy a model as part of a simulation, it has to be rebuilt, adding to the expense.

Physical models can be very time-consuming. Aside from acquiring and building (and rebuilding) the materials, a physical model is unforgiving of mistakes. If you realize your buildings are at the wrong angle, adjusting it isn't as easy as the click of a button. If you only realized your mistake after you destroyed the model, you would have wasted a perfectly good model, adding to the time it will take to finish your study.

Sometimes creating a model large enough to make your test worthwhile is not practical, whereas doing it in a computer or theoretically is easy.

They can be used for:

Advantages of physical models include accuracy, safety, visualization, education, and trying things out that would be impossible in the real world due to safety, cost, or practical concerns. You can visualize things that are extremely tiny, happened millions of years ago, or that otherwise can't be viewed directly. Disadvantages of physical models include being expensive, time-consuming to make, needing to be rebuilt if destroyed, and sometimes it is impossible to build a large enough model.

Why Scientists Use Models & Simulations

The Cost and Benefits of Regulation in Business

The Development of Scientific Theories

The Purpose of Statistical Models

Why Do Scientists Need a Common System of Measurement?

What are Harmonics? - Definition & Types