Alisha is a college music educator specializing in historic and world music studies.

Pablo Picasso was one of the most versatile artists of the early 20th century with his experiments with different creative styles. Learn more about his paintings and explore an analysis of their symbolism. Updated: 10/12/2021
Create an account

Introduction to the Painting

Pablo Picasso was one of the most versatile artists of the early 20th century. His experiments with different styles and media resulted in some of the most celebrated and innovative works of all time. Picasso created the Three Musicians in 1921, while in Fontainebleau, a town outside of Paris, France. The work is composed of oil painting and collage, an artistic technique that combines different media to create a single piece of work, such as cutting images from a magazine and pasting them onto a sheet of paper.

The painting is very large, approximately six and a half feet high and over seven feet wide. It depicts three brightly colored figures seated around a table and set in a dark, box-like room that may be a stage. This version of the painting is currently hanging in the Museum of Modern Art in New York City. 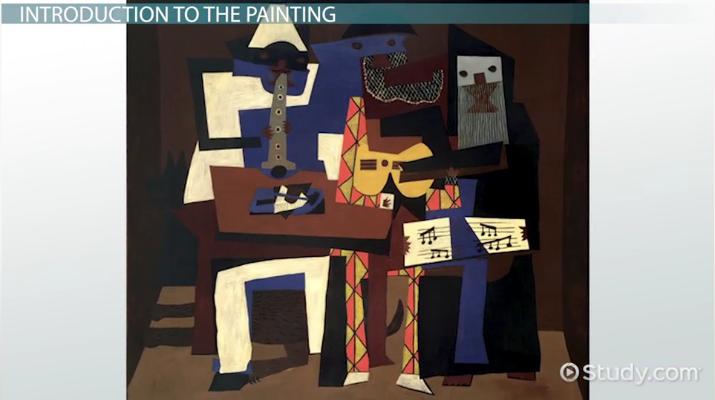 Symbolism in the Painting

The three figures in this painting resemble characters from the Commedia dell'Arte tradition. This Italian theater form began in the 16th century and was still being used in the early 20th century. Its hallmark was to feature well-known stock characters, who were usually masked.

The blue and white clarinet player on the left is Pierrot, a naive clown who is always falling in love and getting his heart broken. His love interests often prefer the handsome trickster Harlequin, seen here in the center wearing the red and yellow colors of the Spanish flag and playing a guitar. As a suave, intelligent servant, Harlequin's character stands in stark contrast to the melancholic clown.

On the right is a singing monk. Although there is not a specific monk character in Commedia dell'Arte, they were often included in these theater performances. Sometimes the stock characters would wear the brown robes of a monk as a disguise. If you look carefully, you can see one more figure in the painting: a dog sprawled underneath Pierrot's chair. Although its face is hidden, you can see parts of its body peeking out from behind the musicians' legs and its shadow on the wall behind the musicians.

The previous year, Picasso had been hired to design costumes and sets for a ballet by Russian composer Igor Stravinsky called Pulcinella, which was based on a Commedia dell'Arte text from the 1700s. It is likely that the inspiration for Picasso's use of Commedia dell'Arte characters in this painting came from this project.

Picasso also created this work as a tribute to two close friends. The Pierrot represents Guillaume Apollinaire, a poet who is considered a father of the surrealist movement. Apollinaire was a World War I veteran who was wounded in battle and died of Spanish influenza in 1918, three years before this painting. The monk is a representation of Picasso's former roommate, Max Jacob, another poet who had introduced Picasso and Apollinaire. Jacob had entered a Benedictine monastery earlier in the same year the Three Musicians was painted.

This work is an example of synthetic cubism, a movement created by Picasso and another artist named Georges Braque. It grew out of the more general trend of cubism, an avant-garde technique characterized by analyzing concrete objects, breaking them up, and then reassembling them in an abstract way. Objects are presented from different viewpoints, and the representation of these viewpoints is more important than a realistic representation of the subject itself. Synthetic cubism has these qualities as well, but was a simpler, more decorative, and flatter style than earlier cubist works.

The figures in this work appear to be constructed out of cut paper and have a 2-dimensional quality. Often, it is difficult to tell exactly where one figure ends and another begins due to the overlapping shapes. Look at the central figure's face. Can you see how the blue rectangle that surrounds his eyes seems to be part of the Pierrot figure?

While the version we just discussed is the more popular one, Picasso actually did a second version of Three Musicians the same year. In this version, the characters are the same, but the instruments have changed. Harlequin is now on the left with a violin, Pierrot in the center with a clarinet, and the monk is now playing a rather distorted accordion. This second version also has a more textured and colorful background as compared to the dull browns of the first. It is hanging in the Philadelphia Museum of Art.

The oil and collage paintings Three Musicians were painted in France in 1921 by Pablo Picasso. The paintings feature three musicians, dressed as a monk, Pierrot, and Harlequin, the latter two being stock characters from the Italian Commedia dell'Arte. The figures represent Picasso (Harlequin) and two of his poet friends: Guillaume Apollinaire (Pierrot) who had died three years earlier, and Max Jacob (monk) who had joined a monastery earlier that year.

The paintings are in the style of synthetic cubism, an artistic movement created by Picasso, featuring flat, 2-dimensional characters that appear to have been cut out of decorative paper. Currently, one of the paintings is hanging at the Museum of Modern Art in NYC and the other is at the Philadelphia Museum of Art.

Collage: an artistic technique that combines different media to create a single piece of work

Cubism: an avant-garde technique characterized by analyzing concrete objects, breaking them up, and then reassembling them in an abstract way

Synthetic Cubism: created by Picasso and Georges Braque, similar to traditional Cubism, but more decorative and with a flatter style

The Dream by Henri Rousseau

Cubism Art & Characteristics | What is Cubism?

Symbols in The Alchemist

The School of Athens by Raphael | Description, Figures & Analysis

Contrast in Art Overview & Concept | Contrast as a Principle of Design

How Mathematical Models are Used in Art