Explore pioneer life, how people known as pioneers lived as they moved west in the 1800s. Discover why people would leave civilization for the open spaces of the west, how they built homes, what they did to survive, and the challenges they faced. Updated: 12/27/2021
Create an account

What Is a Pioneer?

Would you have the courage to pack up everything you own in a covered wagon and travel 2,000 miles across prairies, hills, and mountains while braving blazing heat, thunderstorms, blizzards, and possible attacks from Native Americans? If so, you have the adventurous heart of a pioneer. Pioneers are people who do things for the first time. American pioneers were the first people to explore and settle the western part of the United States. 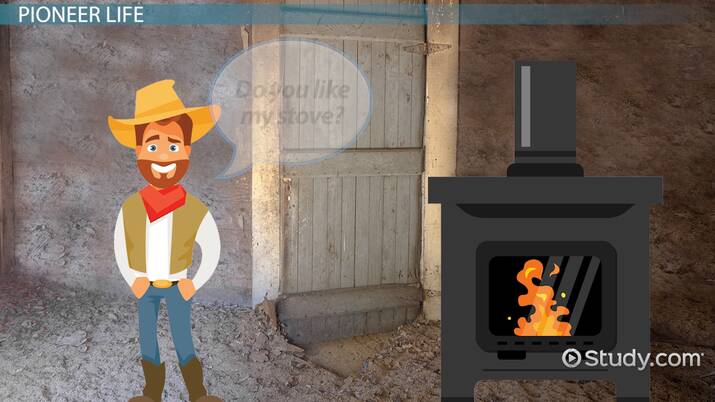 Try it now
Back
Coming up next: Wild West Facts: Lesson for Kids

Have you ever been given something for free? What if it was land? Many pioneers left their homes in the east and traveled west because land was cheap and they wanted to be farmers. Some pioneers were shopkeepers, doctors, ministers, and veterinarians. The Oregon Trail was a famous trail pioneers followed in the 1840s as they ventured west toward Oregon. Many never made it to Oregon, but instead stopped along the trail to make their homes. Let's take a look at the life of the pioneers!

The American pioneer lived life much differently than we do today! Pioneers had to use the land and materials around them to survive. They also relied on help from their neighbors, even if they lived miles away!

If pioneers were lucky enough to settle along a river where there were trees, they could build a cabin. But in places surrounded by prairie, trees were not plentiful. Pioneers built sod-houses, which were homes constructed of the top layer of earth, including grass, dirt, and roots. Special plows cut sod bricks to make the walls of a home. Windows and a door were added if there was enough money. Because of the three-foot-thick walls, sod houses were warm in the winter, and cool in the summer. They had dirt floors and were usually one room.

Pioneers had stoves in their homes, but they didn't burn wood because there wasn't a lot of it. And coal was too expensive. What do you think they used? They used chips, which were droppings from cows or buffalo!

Next, let's explore what pioneers ate! Today, if you need food, you go to the grocery store, where there are unlimited choices. But pioneer children didn't have this luxury. They carried tin lunch pails to school. Their lunches often consisted of bread and lard, cornbread and syrup, and maybe bacon. They had to take turns pumping water from a well to get a drink. At home, the family ate vegetables grown in gardens and smoked or dried meat. If you've eaten beef jerky, then you've had dried meat! Because there were no refrigerators, food had to be preserved to make it last.

Sadly, illness and accidents were common for pioneers, and they had to learn to heal themselves. Women used herbs to make syrups, teas, and rubs for fevers and chest colds.

Extreme weather also created problems. Today we can watch weather reports on television. The pioneers did not have warnings for unexpected weather, including tornadoes and blizzards!

Finally, neighbors were very important to pioneers. Neighbors would gather together for a barn or house raising. The men would help the neighbor build a house or barn, and the women would prepare a picnic. Churches became places for social gatherings, including Christmas parties and quilting bees, where women sewed together and talked. Barn dances were a great time! A fiddler would play music while everyone danced.

We learned that American pioneers were the first people to explore and settle the western part of the United States. The Oregon Trail was a famous trail pioneers followed in the 1840s as they ventured west toward Oregon. Pioneers were independent spirits who learned how to live off of the land, including building sod-houses, homes constructed of the top layer of earth, including grass, dirt, and roots. Although they suffered many hardships, they found enjoyment in simple pleasures, and today, we admire their courage!