An adenoma is a gland tumor, and when affecting the pituitary gland, is known as a pituitary adenoma. Learn the symptoms, conditions, and treatments for tumors that consequently affect the body's 'master gland', a critical component of the endocrine system equilibrium. Updated: 09/28/2021
Create an account

The pituitary gland is sometimes referred to as the body's master gland. It's an appropriate nickname, because this tiny gland acts as a control center for the body's endocrine system. Attached to the brain's hypothalamus, it bridges the gap between the nervous and endocrine systems by receiving signals from the brain and stimulating several hormonal pathways. It oversees growth and development and regulates the function of specific organs and glands.

There are nine major hormones made by the pituitary gland. For this lesson, let's review three of them, their function, and their target tissues and organs.

Pretty impressive for a gland that is only about the size of a pea!

An adenoma is a tumor of a gland - specifically, in a gland's epithelial tissue. A pituitary adenoma is, then, a tumor of the pituitary gland. Pituitary adenomas range in size and severity, and their cause is unknown. Macroadenomas are over 1 cm; microadenomas are less than 1 cm. Most adenomas are benign, and the ones that are malignant rarely spread to other organs or glands. They may be either functioning - that is, they secrete hormones - or non-functioning, which means they are simply growths on the adrenal gland and do not secrete anything. If you think about the three hormones we just covered, you can see why a functioning pituitary adenoma will likely have very profound effects on the body! 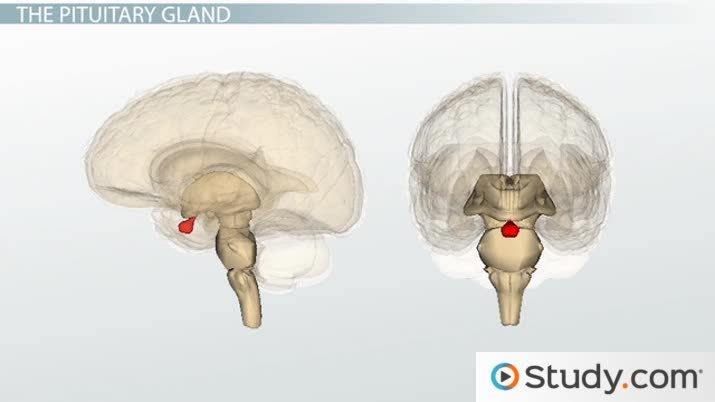 Try it now
Back
Coming up next: Hyperthyroidism: Causes, Signs & Treatments

General symptoms of pituitary adenomas include those of many brain tumors. These are considered to be 'mechanical' since they're caused by the physical pressure of the tumor on surrounding brain structures. These include headaches, vision problems, depression and other mood disorders, and fatigue.

Acromegaly is usually the result of a functioning pituitary adenoma that secretes growth hormone. The condition comes from the body's inability to use its normal feedback pathway to stop the production of growth hormone and the cascade of other hormone pathways that it triggers. The word 'acromegaly' literally means 'large extremities' and accurately describes some of the symptoms of this condition, which include enlargement of body parts like hands, feet, nose, lips, and ears, as well as a protruding brow and lower jaw, joint pain, sleep apnea, and excess perspiration.

If the pituitary adenoma produces too much prolactin, it's called a prolactinoma. Prolactin is a hormone that causes breast tissue to make milk. As in acromegaly, the prolactin pathway is usually under tight control by the body, stimulated by childbirth and breastfeeding. If not stimulated by these acts, prolactin production normally falls. In women, prolactinomas can cause galactorrhea, the inappropriate production of milk; that is, milk is produced even though a woman is neither pregnant nor nursing. Too much prolactin can also cause infertility and irregular or sometimes absent menstruation, amenorrhea. In men, symptoms of this type of prolactinoma are usually limited to sexual dysfunction and the general symptoms we discussed earlier in this lesson.

A condition caused by exposure to high concentrations of cortisol, called Cushing's disease, is often caused by pituitary adenoma. In this condition, the pituitary adenoma secretes ACTH, which acts on the adrenal glands to produce large, uncontrolled amounts of cortisol. Excess cortisol causes weight gain, especially around the face and between the shoulder blades. People who have Cushing's also heal slowly, bruise easily, and may have difficulty controlling their blood sugar.

As with symptoms, treatment of pituitary adenomas varies and must be tailored to the needs of the patient. For example, many non-functioning adenomas are simply monitored through MRI. Most macroadenomas, especially those that cause consistent vision problems, are removed surgically, specifically transsphenoidal surgery, entrance through the nasal cavity and the sphenoid bone at the bottom of the skull. Surgery has about an 80% cure rate, especially if followed by radiation.

If the tumor is functioning, however, then the upset balance of the endocrine system is sometimes restored through medication. Let's take a look at some of the ways drugs are used to treat the conditions we've discussed.

Adenomas that secrete growth hormones are treated primarily with somatostatins, a class of drugs that are synthetic replicas of the naturally produced hormones that prevent growth hormone from being released from the pituitary gland.

Prolactomas are treated, and treated very effectively, with a class of drugs called dopamine receptor agonists. Let's break that down into three parts. First, dopamine is a neurotransmitter. In the brain, one function of dopamine is to inhibit the secretion of prolactin. Second, an agonist is the opposite of an antagonist. Remember: the antagonist of a story is the villain, the character that works against the hero or heroine, while an agonist works with something. Third, dopamine receptor agonists bind to dopamine receptors when no dopamine is present. Therefore, these drugs function by binding to receptors on the pituitary adenoma, preventing prolactin from being secreted.

It's important to note that if surgery can be done safely and effectively, it's often used as the first course of treatment. In the case of Cushing's, for example, surgery is almost always the preferred treatment. On the other hand, if the adenoma is very small, it's not uncommon to take a watch-and-wait approach - that is, to monitor the patient's health and treat symptoms according to need.

The body's master gland, the pituitary gland is the control center for the body's endocrine system. Its jobs include overseeing growth and development and regulating the function of specific organs and glands.

An adenoma is a tumor of a gland, specifically, in a gland's epithelial tissue. Therefore, a pituitary adenoma is a tumor of the pituitary gland. These tumors range in size and severity, and their cause is unknown. Adenomas are sometimes classified by their size and severity. Macroadenomas are over 1 cm; microadenomas are less than 1 cm. Most adenomas are benign, and the ones that are malignant rarely spread to other organs or glands. They may be either functioning - that is, they secrete hormones - or non-functioning, which means they do not secrete hormones.

The symptoms of pituitary adenoma vary widely. Non-functioning adenomas usually cause symptoms similar to those of most brain tumors, including headaches, vision problems, depression and other mood disorders, and fatigue.

Symptoms of a functioning adenoma depend on the hormone they secrete. Three examples of conditions caused by functioning pituitary adenomas are:

Treatment of adenomas also varies, with surgery being the most common. Specific drugs are also used for functioning adenomas. Specifically, somatostatins are used to treat acromegaly, and dopamine agonists to treat prolactinomas.

After completion of this lesson, you should be able to: