The Structure of the Shoot System

As we move from the ground surface to the terminal bud (end of the undeveloped shoot) we will encounter nodes and internodes. Nodes are the points where leaves are attached, and internodes are the places on the stem between the nodes. In the crux created by the node and stem, there are axillary buds that lay dormant but have the potential to grow a vegetative branch.

If the axillary buds begin to grow, they can create their own terminal buds, leaves, etc. They, in a sense, create a secondary plant themselves. If you own any houseplants, you might understand the idea of pruning them to create 'bushy' plants. Well, this is because you are removing the terminal bud that stimulates the axillary buds to grow, creating that thicker looking plant.

As is commonly known, the leaves of the plant act as the photosynthetic factory for it, producing sugars and other compounds for the plant to survive on. There are many different types of leaves, but most will include a blade, stalk, veins and the petiole. The stalk is the main stem of the leaf, the blade is the actual green leaf portion, and the petiole is where it attaches to the node. The veins are similar to our veins in that they carry water and nutrients out into the leaf. 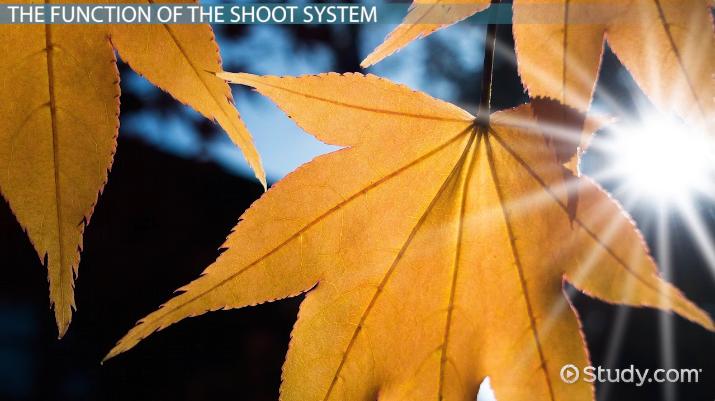 Try it now
Back
Coming up next: Plasmodesmata: Definition & Function

In certain plants, there is a secondary tissue structure called the vascular cambium and the cork cambium. In the vascular cambium, new tissue is constantly being made that replaces vascular tissue in the plant. As the plant ages, new tissue forms and old ones harden, forming rings (like when you cut a tree down). The cork cambium helps to create the bark of the plant, further protecting it from outside harm.

The Function of the Shoot System

Once the nutrients have arrived where they need to be, the plant can use what it needs in the process of creating food and energy for itself during photosynthesis. This occurs in the leaf's chloroplasts, which is the reason that the plant's leaves are so very important. The leaf is also responsible for collecting more water as well as oxygen, carbon dioxide and sunlight. Without these components, the plant would not have a chance at survival.

Let's review. The shoot system consists of the stems and leaves of the plant. More specifically, it includes the nodes, internodes, axillary buds, terminal bud and leaves. The leaf has four parts as well, the stalk, blade, veins and petiole. Each part works to keep the plant alive and functioning properly. The shoot system uses the root system to draw up water and nutrients and deliver them to where they need to go in the plant's leaves. Once there, the leaf will use these materials in photosynthesis as the leaf absorbs sunlight.

Root System Parts, Growth & Anatomy | What does a Root Cap Do?

Function of Roots: Lesson for Kids

Root System Parts, Growth & Anatomy | What does a Root Cap Do?

Function of Roots: Lesson for Kids