Perhaps as a little kid you saw the animated movie Anastasia. It was a movie based on true events with a healthy dose of Hollywood spin. The real-life princess Anastasia had a brother named Alexei who suffered from a condition called hemophilia. This is a disease where the blood fails to properly clot, one where even a small scratch could turn deadly.

That's why in desperation, his mother, Empress Alexandra, turned to the notorious charlatan Rasputin in order to try and save Alexei's life. Thankfully, we don't have to rely on people like Rasputin anymore and can instead turn to science to diagnose clotting disorders via several tests mentioned in our lesson. 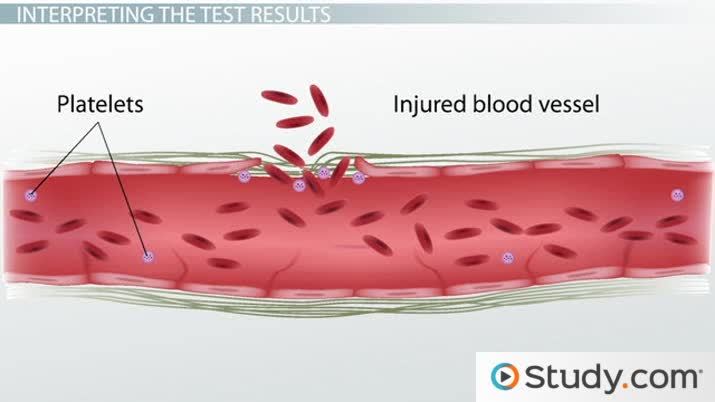 Coming up next: Neutrophils: Definition & Function

OK, let's begin then. Before getting to the tests, it's necessary to appreciate at least the very basics of what clotting is and what it entails. Clotting is a composite of two general components. This includes platelets, which are quasi-cells that combine with clotting factors (which are proteins) to form a clot, a plug of sorts, in any area of bleeding.

If there was a deficiency in number or appropriate function of platelets or coagulation factors, then a person would be at an increased risk for bleeding. An area that is bleeding is like an open wine bottle turned upside down, pouring its red wine out. It's the platelets and coagulations factors that form the cork that stops the bottle from becoming empty.

Most of the clotting factors are made in the liver, and many of them are dependent on vitamin K in order to be synthesized. Specifically, factors II, VII, IX, and X are vitamin K dependent. All of these will be important points to remember for later.

Hopefully, by looking at the first two letters in 'ex'ternal and 'in'ternal, you'll easily remember which system is triggered when.

These two pathways then combine to form one appropriately called common pathway that includes factors I, II, V, and X.

And with that lowdown on the coagulation cascade out of the way, it's time we look at interpreting blood tests that rely on this information.

Prothrombin time, also known as PT, is a measurement that assesses the extrinsic and common pathways of the coagulation cascade. You may be familiar with PT if you are on warfarin (aka Coumadin) therapy or know someone who is. PT is used to measure the effectiveness of this therapy.

Partial thromboplastin time, abbreviated as PTT, is a measurement that assesses the intrinsic and common pathways of the coagulation cascade. You might know this test if you are on heparin therapy as it's used to monitor the effectiveness of this treatment. PTT, for all practical purposes and this lesson, is also known as activated partial thromboplastin time, abbreviated as aPTT.

To try and remember which test measures what factors, think about the fact that the intrinsic pathway has more factors involved in it and PTT has more letters than PT. It's a very simple trick, but it works!

Another important measurement with respect to coagulation that we need to look for is our platelet count. If blood tests reveal there are abnormally low levels of platelets in the blood, we term this thrombocytopenia. A thrombocyte is a technical term for a platelet. A 'thromb'ocyte helps to form a thrombus, which is a blood clot. Hopefully that little tidbit helps you remember the interrelationship between these words.

Along with thrombocytopenia, another red flag that tells us something is wrong in our body with respect to clot formation is if PT or PTT is prolonged on a blood test, meaning it's taking longer than normal for the blood to clot.

Now that we've got that settled, it's time we interpret some blood work. Let's say our blood test comes back with the following information: a normal PT, PTT, and thrombocytopenia. This means that something is causing our platelet numbers to drop, increasing our risk of bleeding out. This could be due to:

Now, let's say that the blood tests revealed the following instead: thrombocytopenia with prolonged PT and PTT. Here we've likely got a massive problem that can really cause us to bleed out. One problem could be severe liver disease. Remember that the liver is responsible for the production of many coagulation factors. Additionally, the liver produces a hormone, called thrombopoietin that tells the bone marrow to make platelets. If the liver is super sick, the bone marrow isn't stimulated to produce many platelets either.

Another possibility this test result is telling us is that we're short on almost everything that's used for clotting! The biggest reason for this is a condition called DIC, or disseminated intravascular coagulation. We don't have time for too many details on this, but something in your body causes improper and uncalled for clot formation all over the place. This abnormal clot formation simply consumes all of your clotting factors and platelets en masse, decreasing the numbers available to produce a clot when it's actually necessary, causing a person to ironically but unfortunately bleed out.

If, on the other hand, platelet numbers are normal but both PT and PTT are prolonged, we might have to suspect a deficiency in vitamin K. Recall that vitamin K is important in the synthesis of factors found in all three pathways. Of course, the prolongation of both PT and PTT can point to common pathway factor deficiencies, but these are quite rare.

But what if we've got a normal platelet count, normal PTT, but a prolonged PT? In this case, we know our extrinsic pathway is affected only. That's because, recall, both PT and PTT also measure the common pathway, so if one of them is normal, by default the common pathway isn't affected since both would be prolonged. In our case, because only PT is prolonged, we know that factor VII is deficient.

On the flipside, if there are normal numbers of platelets, a normal PT, but a prolonged aPTT, then we know something is wrong with a factor in the intrinsic pathway. This test result may be pointing to:

You might be overwhelmed with how much you've learned in this lesson, but there are so many other tests with respect to coagulation we didn't even cover. For our purposes, though, let's stick to the tests we learned about in this lesson.

Prothrombin time, also known as PT, is a measurement that assesses the extrinsic and common pathways of the coagulation cascade.

Another important measurement with respect to coagulation we need to look out for is our platelet count. If blood tests reveal there are abnormally low levels of platelets in the blood, we term this thrombocytopenia. A thrombocyte is a technical term for a platelet. A 'thromb'ocyte helps to form a thrombus, which is a blood clot.

Some of the benefits of studying and completing this lesson could be the ability to:

What Are Pulmonary Function Tests?

The Function of the Circulatory System Lesson for Kids

What Are Globulins? - Definition & Types