Amy has an M.A. in American History. She has taught history at all levels, from university to middle school.

This lesson explains the impact of Plessy v. Ferguson, an important Supreme Court decision made in 1896. The Court ruled on the concept of 'separate but equal' and set back civil rights in the United States for decades to come. Updated: 12/13/2019
Create an account

On June 7, 1892, Homer Plessy sat in the section of a railroad car that was for 'whites only.' As he expected, he was arrested after he refused to move. Judge John Howard Ferguson of Louisiana ruled against Plessy's argument that making him sit in a separate part of the train violated his constitutional rights. Plessy then took his case to the Supreme Court. 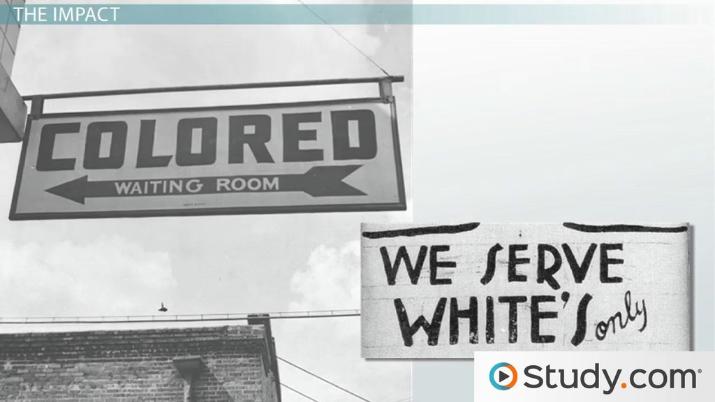 Coming up next: Reconstruction Acts of 1867: Definition & History

Plessy's lawyer argued that Louisiana's Separate Car Act violated the 13th and 14th Amendments to the Constitution. The 13th Amendment abolished slavery. The 14th Amendment grants citizenship rights to anyone born in the United States. It also says that no laws should be made to take away the rights of U.S. citizens.

The Supreme Court disagreed with Plessy's lawyer. Supreme Court Justice Henry Brown said that even though the 14th Amendment may have intended to make African Americans and white people 'equal before the law,' it did not necessarily intend for the two races to be 'equal in society.' According to Justice Brown, whites should not be forced to be in the same public places as African Americans.

Plessy v. Ferguson allowed 'separate but equal,' also known as segregation, to become law in the United States. After this, Jim Crow laws, which were a system of laws meant to discriminate against African Americans, spread across the U.S. For decades, any type of public facility could be legally separated into 'whites only' and 'blacks only.' That meant that buses, water fountains, lunch counters, restrooms, movie theaters, schools, courtrooms, and even the United States Army could all be segregated.

Rules and laws were also made to prevent African Americans from voting. Even though the law stated that the separate facilities had to be equal, most of the time they were not. White people almost always had access to the best facilities, especially in schools. Civil rights activists protested against segregation in the 1950s and 1960s and were often met with violence from white people who did not want the laws to change.

The End of Plessy v. Ferguson

In 1954, Plessy v. Ferguson was finally struck down. Oliver Brown sued the Board of Education in Kansas because his young daughter was forced to walk for miles to a black school when a white school was closer to her home. Brown v. Board of Education ruled that 'separate but equal' did not apply to public schools and that public schools had to educate both white and African American children.

Even with that ruling, some states, such as Arkansas, did not want to go along with the new laws and refused to follow them until the federal government got involved. And segregation was allowed to continue in other facilities since Brown v. Board of Education only applied to public schools. Legal discrimination based on race and gender did not end until the Civil Rights Act of 1964.

Plessy v. Ferguson was one of the most important legal decisions ever made in the U.S. It allowed states to make laws that discriminated against U.S. citizens simply because of the color of their skin. 'Separate but equal' allowed Jim Crow laws to exist throughout the country. This then led to violence as protestors clashed with those people who did not want the laws to change. Even when Brown v. Board of Education reversed Plessy v. Ferguson in 1954, the new law only applied to public schools. It would be another ten years before legal racial discrimination ended forever.

The Attack on Pearl Harbor: The Beginning of American Involvement in World War II

The Great Railroad Strike of 1877