Amy has taught college and law school writing courses. She holds a master's degree in English and a law degree.

A number of techniques are used when constructing fiction in order to better aid or explain the plot. Learn more about plot techniques in American fiction, review the definitions of each, and understand them through examples. Updated: 10/21/2021
Create an account

When we think about plot, we tend to think purely about the events of a story. First, this happened, and then that, the two main characters meet, they get married, they join the circus, and then they die. The end.

But there's more to a plot than just the events themselves. Great, celebrated authors employ a number of literary techniques to achieve specific effects with their writing. 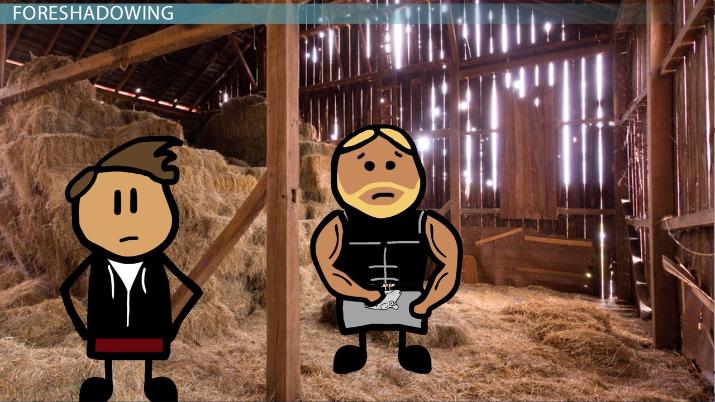 Coming up next: Analyzing the American Short Story: Techniques and Examples

Have you ever seen one of those horror movies where there's a kid who's a little creepy? Maybe he says something shocking to an adult, or hurts another child, and the effect is that you're wondering if he might do something even worse - something scarier - later on.

When something like that happens, the moviemaker has employed foreshadowing, which is an author's use of hints or clues to suggest what might be coming later in the plot. Novelists do this, too, to heighten the impact of the twists and turns of the story.

With foreshadowing, an author may lay in small details within the plot that suggest that something bigger might loom on the horizon. John Steinbeck's Of Mice and Men, a novella, or short novel, contains a number of moments in the plot that foreshadow more major events that occur later. In the novella, one of the main characters, Lennie, is mentally challenged and doesn't know his own strength. Early in the novella, Lennie's friend George finds him petting a dead mouse that he accidentally killed. Lennie later also inadvertently kills a puppy. These acts foreshadow the later event in which Lennie accidentally kills the flirtatious wife of a man that he works with.

Once it becomes clear what Lennie has done, George, out of mercy, shoots and kills his friend Lennie rather than let an angry mob murder him as payback for the death of the other man's wife. This shooting, near the end of the novella, was also foreshadowed by an earlier event in the story in which one character shoots the very old dog of another worker. Events in a story that foreshadow plot points that occur later on can set the stage thematically for all those later occurrences, as they do in Of Mice and Men.

Sometimes in literature, clues are laid that appear to be pointing in one direction, but things in fact end up turning out a different way. A red herring is a plot development that suggests that things may be other than what they truly are. Red herrings are common in detective fiction and murder mystery stories because they help keep the reader guessing. The author of a mystery may drop clues that indicate that, say, the butler did it, only to reveal later that the victim's hairdresser was the actual guilty party.

Red herrings aren't always confined to mystery novels, though. One novel that employs the red herring technique is Harper Lee's To Kill a Mockingbird. In that novel, the young children Scout and Jem Finch, along with their friend Dill, obsess about their neighbor, Boo Radley, who rarely leaves his house. Radley has developed a legendary reputation among neighborhood kids as a dangerous monster, and the children often plot to draw him out of his home.

Toward the end of the novel, after the racism and ugliness of many of the people in the town of Maycomb, Alabama, where the novel is set, are revealed, Boo Radley saves Scout and Jem from a man who tries to kill them as an act of revenge against their father, Atticus Finch.

It gradually becomes apparent throughout the novel, and particularly at the climactic end of the book when Radley saves the children, that he is not the monster. There are others in the town capable of evil deeds - including those who planned to lynch Atticus's innocent African-American client, Tom Robinson - but Radley is not among them. Instead, he has acted to protect the children, and Scout realizes that he has not been hiding from society because he is monstrous, but has perhaps sequestered himself because of what he sees in society.

The stories that children tell one another earlier in the novel about Radley are plot devices that serve as red herrings. Suspicions are raised about him, but it's revealed that the true darkness in the novel resides outside, rather than inside the Radley home. At the very end of the novel, Scout purports to recount to her father the story he was reading to her as she fell asleep, but really presents a characterization of what she has learned about Boo Radley: 'An' they chased him 'n' never could catch him. . . why he hadn't done any of those things. . . Atticus, he was real nice. . .' Atticus underscores the misperception about Radley, and the misdirection that had pervaded the plot about him up to that point when Atticus replies, 'Most people are, Scout, when you finally see them.'

Not all action in a novel will always revolve around the main character or the main plotline. A novel may contain a B-plot, or secondary story.

The main thrust of Harper Lee's To Kill a Mockingbird involves the young girl Scout growing up during the Depression in Alabama, and her father, the attorney Atticus Finch, who defends Tom Robinson, the African-American man who has been falsely accused of raping a white woman. The minor obsession that Scout, her brother Jem, and their friend Dill develop with Boo Radley would constitute the B-plot of the novel. It's not that the Boo Radley storyline is unimportant to the novel; it's just the case that it is not the main story. The Boo Radley subplot is woven in with the other main plotlines of the novel when he saves Scout and Jem from Bob Ewell, the father of Tom Robinson's accuser, when Ewell tries to kill the children as an act of revenge against Atticus Finch.

Another technique often employed in literature is the use of backstory, or the telling of past events that serve to develop and explain the characters in the present story. One noteworthy example of backstory occurs in Toni Morrison's novel Beloved.

The novel centers on a former slave, Sethe, living in Ohio with her daughter, Denver. Another former slave, Paul D, comes to visit Sethe near the start of the story, triggering memories for her of her days as a slave in Kentucky. The backstory of Sethe's life as a slave is told throughout the novel, along with her present-day story. The most important revelation from Sethe's backstory is the manner in which her other daughter died. A pregnant Sethe, having escaped to Ohio where she stayed with her mother-in-law and three children, was tracked down. On the verge of being caught, Sethe resolves to kill her children rather than have them be enslaved by the sadistic, violent slave master who has come for them. Prior to being seized, Sethe killed her older daughter.

This tragic backstory illuminates the current story of Sethe in Ohio, whose home has been haunted by a ghost, and who soon encounters a young woman named Beloved who, it is believed, is the incarnation of Sethe's dead daughter. Beloved and Sethe develop a deep and troubling bond that demonstrates the tortured emotions Sethe feels about having killed her daughter years ago.

The plot of a novel contains more than just the events of the story. Many authors employ techniques to heighten the impact of the stories they tell. One such technique is foreshadowing, in which the author uses hints or clues to suggest what might be coming later in the plot. Some clues don't always pan out the way the reader thinks they might, though. Some may be put in place by the author to deliberately mislead readers and keep them guessing. A red herring is a plot development that suggests that things may be other than what they truly are.

After learning about these plot techniques in American fiction, you should be able to do the following:

Dissection Tools & Overview | What is Dissection?

What Is the Uterine Cavity? - Size & Definition

How to Analyze Plot: Steps and Examples