A point of view is defined as the perspective that a work--such as a dialogue--is written. Learn about the differences between the first, second, and third point of view, and how to properly use and identify them in writing. Updated: 08/20/2021
Create an account

Me, you, them - what's it all about? Of course, I'm talking about those surveys that fill our inboxes and are at the ends of seemingly every receipt. I'm just buying a pack of gum; I'm not interested in answering 30 questions about the experience. I really don't have a point of view on the matter.

You'll use different ones depending on what type of work it is, as well as what you're trying to do with it. In this lesson, we'll define each type of point of view, look at examples and cover the situations in which each is useful. There will be no survey at the end for you to complete. Or will there? 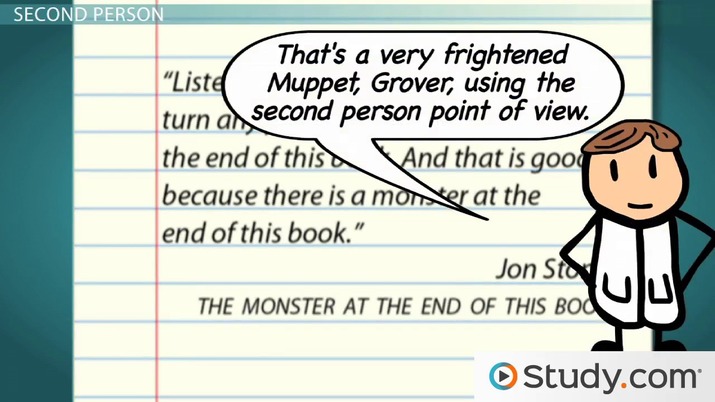 Coming up next: How to Write Logical Sentences and Avoid Faulty Comparisons

If you're like me, it makes sense to start with me. I mean, why shouldn't I be first? Okay, I'm not really talking about me. I'm talking about our first point of view: first person. This is when the narrator is referring to him or herself. You will see 'I,' 'me,' 'my' and 'mine' in first person.

Many novels are written in the first person. For example, there's F. Scott Fitzgerald's The Great Gatsby. Here's the opening line: 'In my younger and more vulnerable years my father gave me some advice that I've been turning over in my mind ever since.' My, my, me, I've, my... this is clearly first person point of view. Same goes for Herman Melville's Moby Dick: 'Call me Ishmael.' Ishmael is our narrator, and he's in the story talking about himself.

Other than fiction, when would you use first person? Anything autobiographical, like a memoir or personal essay; if it's you writing about you, then first person is the way to go. I wouldn't write about myself, 'Jeff went on to win the unprecedented Nobel Prize, Super Bowl MVP and World Karaoke Championship trifecta.' That would be weird.

But first, we need to talk about you; and by you, I mean second person point of view. This is when the reader is directly addressed with 'you,' 'your' and 'yours.'

You don't see this in many novels. It's very strange in fiction. Here are the opening lines from one of the few examples, Jay McInerney's Bright Lights, Big City: 'You are not the kind of guy who would be at a place like this at this time of the morning. But here you are, and you cannot say that the terrain is entirely unfamiliar, although the details are fuzzy.' How do you feel being the main character? It's strange, right?

You know where it's less strange? How about this: 'Listen, I have an idea. If you do not turn any pages, we will never get to the end of this book. And that is good, because there is a monster at the end of this book.' That's a very frightened muppet, Grover, using the second person point of view in The Monster at the End of This Book. Kids' books often address the reader using second person. It's useful if you're telling someone how to do something - maybe it's an advice column or a how-to guide.

Again, this isn't a style you'll see in academic writing. In fact, it's really not seen very often.

You know what is common? Our final point of view: third person. This is where the narrator doesn't refer to him or herself - as in first person - and isn't addressing the reader - as in second person. Instead, you get an observer's perspective and lots of 'she,' 'he,' 'her,' 'his,' 'their' and 'theirs.'

If first person is someone telling you his or her story, and second person is you being told how you should do something, then third person is more like a camera recording events. That's not to say it's necessarily an objective point of view. A third person narrator can be highly subjective. The narrator just doesn't directly inject him or herself into the story by using 'I.'

There are myriad examples of third person point of view in literature. Here's one, the opening of Jane Austen's Pride and Prejudice: 'It is a truth universally acknowledged, that a single man in possession of a good fortune, must be in want of a wife.' Note that the narrator doesn't say, 'I want a wife' or 'you want a wife.' No, the narrator is not a character in the story.

This is also the most common point of view in academic writing. It's considered the most formal, impartial point of view. Though, again, it's not inherently impartial. It just seems more unbiased if you don't talk about yourself.

For your own writing, it's critical that you're consistent with your point of view within a work. In Moby Dick, if Ishmael stopped narrating the story, it would be jarring.

Likewise, what if we rewrote the opening of Ernest Hemingway's The Old Man and the Sea to shift point of view. It starts: 'He was an old man who fished alone in a skiff in the Gulf Stream and you had gone 84 days now without taking a fish. In the first 40 days a boy had been with me.' Wait, what? It's confusing, right? That 'you' should be 'he,' and that 'me' should be 'him.'

As for identifying point of view, it's important to note that first and second person works can contain third person pronouns. For example, you could say, 'I bought him a biscuit.' That 'him' doesn't make it third person. But third person works will usually only contain 'I' or 'you' in dialogue or quotations.

In summary, we defined point of view as the perspective from which a work is written. We looked at the three types of point of view: first person, second person and third person.

How to Compare First & Secondhand Accounts: Lesson for Kids

Point of View of Characters vs. the Reader

'Get to Know You' Activities for Middle School