In art, pointillism is a method that uses small dots of different colors to generate depth and heighten intensity in colors. Explore the definition and history of pointillism, and learn about notable artists, such as Georges Seurat and Vincent van Gogh, who used this method. Updated: 10/17/2021
Create an account

Originating with Impressionist masters, pointillism relies on using tiny dots of varying colors to create depth in a work of art. By doing so, the artist is able to create incredibly subtle variations in color that would have appeared otherwise clumsy. Especially popular during the 19th century, the style is considered part of the Post-Impressionist period, a movement that continued many of the ideals of Impressionism - namely the ability of the artist to place what appears in the mind's eye on canvas for the viewer.

Such an emphasis on color comes at a substantial cost in terms of shape and movement. Only a handful of works were able to avoid the appearance of stiltedness, and practically every Pointillist work looks posed, unlike many of the earlier Impressionist works, which seem to capture a moment of life untamed. 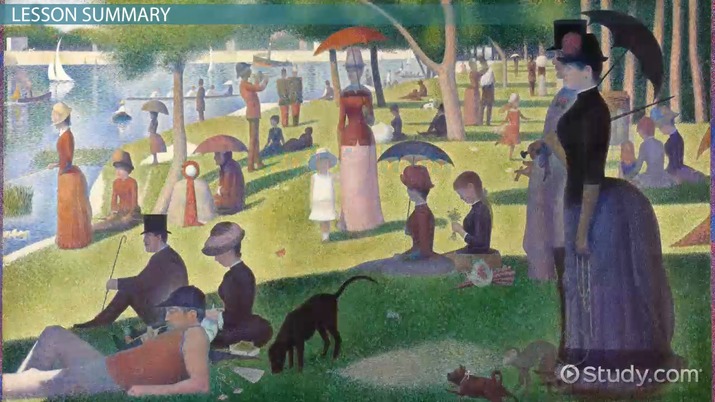 Coming up next: Positive & Negative Space in Art: Definition & Examples

Perhaps the most famous of the Pointillists is Georges Seurat: a French artist who lived during the late 19th century. During his tragically short life - he died at age 31 - he served as one of the true pioneers of Pointillism.

Further, he combined considerable mastery of chromoluminarism, or the practice of leaving white spaces on the canvas between the dots, to create a level of light that was otherwise impossible. Among his most famous works is A Sunday Afternoon on the Island of Grande Jatte.

While the forms may look artificial, the color leaps off the canvas much like one would expect on a summer afternoon.

Another prominent Pointillist was Paul Signac, famous for his travels throughout the Mediterranean. The bright colors possible with the pointillist technique lent itself very well to portraying the exotic images, at least by Parisian standards. Among his major works is The Grand Canal (Venice).

Maximilian Luce began his career as a typical Impressionist then ventured into Pointillist techniques for a greater exploration of color. His Morning, Interior demonstrates significant Impressionist leanings, especially with the detail given to create creases and wrinkles in the sheets on the bed.

When compared to Seurat's work, there is considerable loss of color, but the viewer loses no great knowledge of Luce's vision due to his use of pointillism for more than just color. Not surprisingly, Luce returned to more traditional ways of exploring art through Impressionism later in his career.

Vincent van Gogh introduced another element to Pointillism in that he was able to display chilling emotion through the gaze he saw in the mirror, as evidenced by his Self Portrait.

Note that as the viewer is drawn closer to the eyes of the artist, the practice of chromoluminarism is all but abandoned in the process of creating a dark and tormented soul. While van Gogh would abandon many of the tenets of Pointillism, he would continue to use the determined application of dots of color to add considerable depth.

Whereas other Impressionists, and indeed other Post-Impressionists, concerned themselves more with concepts such as shape, movement, and feeling, Pointillism, a 19th-century art movement, relied on tiny dots of colors to create depth in a work of art. And while the images produced may look somewhat stilted or artificial, the visceral reaction invoked by the emphasis of color is no less real. Famous Pointillist artists included Georges Seurat, Paul Signac, Maximilian Luce, and even Vincent van Gogh.

Impasto Techniques, Effects & Artists | What is an Impasto Painting?

Cubism Art & Characteristics | What is Cubism?