What Is a PAC?

Let's take a look at where all this money comes from. Political candidates use a variety of ways to raise election funds. While most political donations come from private individuals, Political Action Committees, or PACs, also play an important role. A PAC is a private political organization used to raise and spend money in order to elect or defeat particular candidates.

Typically, PACs are organized to represent a corporation, business, political party or political interest. For example, Microsoft and the National Rifle Association, or NRA, both sponsor PACs. 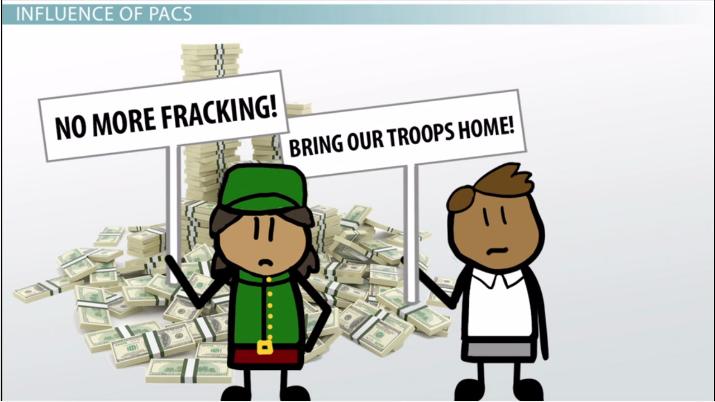 Note that PACs are just one facet of Campaign Finance. Campaign finance refers to all money raised and spent when politicians run for public office. It's all of the money produced to pay for an election effort. It includes the election funds used to support particular candidates, issues, political parties and policies. Campaign finance has played an increasingly important role in elections.

Generally speaking, the primary goal of all campaign financing is to influence the outcome of the election. PACs spend millions of dollars each year in an effort to influence government decisions.

For example, from 2013 through 2014, PACs raised $1.6 billion. That's a $400 million increase over just four years. The National Association of Realtors raised $3.8 million alone. They use PACs to support several different political issues, such as advocating for favorable property tax rates and fighting the deregulation of financial services. These are things that help realtors sell more houses so these issues are important to them.

Now let's take a look at some of the unique characteristics of PACs. PACs are organizations that donate or spend more than $1,000 for the purpose of influencing an election. A group that collects and donates less than $1,000 is not considered to be a PAC.

The distinction is important because PACs are subject to certain federal laws that limit their contributions. Generally, PACs are limited to donating no more than $5,000 to a single candidate, and no more than $15,000 to a political party, each election.

Also, when a PAC is newly formed, it must register with the Federal Election Commission, or FEC, within 10 days. The FEC is an independent regulatory agency that manages U.S. campaign finance legislation.

The FEC has only been around since 1975, but PACs have been around since 1944. That's when the Congress of Industrial Organizations, known today as the AFL-CIO, formed the first PAC in order to raise money for President Franklin Roosevelt's re-election. The union members made voluntary, individual contributions in order to circumvent a new federal law preventing federal campaign contributions from labor unions.

Their plan worked. Not only was Roosevelt re-elected, but their innovative finance idea caught on. At the end of 2008, there were more than 4,500 PACs registered with the FEC.

Let's review. Political action committees, or PACs, are private political organizations used to raise and spend money in order to elect or defeat particular candidates. PACs collect and pool contributions from individuals. They then give those contributions to candidates, political parties and other PACs.

PACs originated in 1944, when the CIO wished to influence President Franklin Roosevelt's re-election. PACs are an important part of campaign finance, which is all money raised and spent when politicians run for public office. Some characteristics of PACs include that they:

What is a Pac? | Political Action Committee Examples

Political Platform Purpose & Examples | What is a Party Platform?

How to Improve Validity of a Scientific Investigation