Britain's reform movements in the 19th century addressed the social changes and problems caused by the Industrial Revolution. Explore the social, labor, political, and economic reforms of 19th-century Britain. Updated: 10/06/2021
Create an account

'It was the best of times; it was the worst of times,' is the oft-quoted beginning to Charles Dickens' work A Tale of Two Cities. Dickens, a British writer who was active during 19th-century Victorian Britain, is often considered the writer who best captured that particular period of British history. That line gets at the heart of 19th-century British society perhaps better than any other. For some, like industrialists and the aristocracy, life could seemingly not get any better. For others, however, like the working poor, the quality of life was possibly at its lowest levels in modern history.

Not everyone was willing to accept this fact of British life. Organizers, from fledgling labor unions to grassroots activists to members of Parliament, agitated for change and an improvement in the overall quality of life in 19th-century Britain. This lesson will detail the results of several of those reform movements. 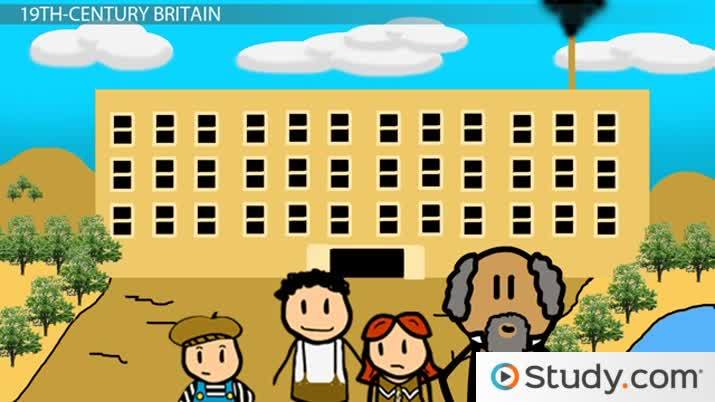 Coming up next: The French Revolution of 1848: History, Causes & Events

Most of the reform movements that cropped up in Great Britain in the 19th century were in reaction to the extreme social change caused by the Industrial Revolution. The Industrial Revolution impacted British society far quicker than the rest of Europe as the Industrial Revolution largely began on the island nation. Indeed, in the second half of the 18th century, factories sprang up in many British cities, driven by the invention and innovation that made the high volume production of everyday goods possible. Everything from household goods to industrial products was now produced in incredible quantities at a fraction of the former price.

The factories and innovations that spurred this burst of industrial productivity required an enormous amount of men, women, and children to man the machines used in production. As a result, Great Britain underwent a major demographic shift in only a couple generations as entire families flocked to cities where the factories were based. Whereas in 1800, most of Britain still resided in small, farming communities, by the 1850s over half of the British populace lived in cities and worked in industrial production. These cities were often ill-equipped to deal with the rapid influx of people, and sewage and water systems were taxed to the breaking point as families set up makeshift dwellings and overpopulated what housing existed.

To make matters worse, working conditions were little better inside the factories themselves. Workers often toiled for long 14-16 hour shifts at dangerous machines where one small slip could cost a worker a finger, a leg, or even his life. Children often worked in these factories as well, doing odd jobs, such as cleaning, or doing highly dangerous work in small spaces where adults could not fit.

For some, the dangerous working conditions and deplorable living standards large portions of the British population now endured were too much to bear. Early labor leaders gained some sympathy in progressive parliamentarians, though any government interference in the factories was met with vehement opposition by the factories' owners and industrialists. Nevertheless, several laws throughout the 19th century addressed working conditions.

The earliest acts regarded child labor. Many poor children under the age of ten worked in British factories in the early 19th century, considered 'pauper apprentices' according to British law. For example, in the cotton industry, where small and nimble fingers were needed for the intricate work, it is estimated that one-fifth of laborers were under the age of 13. Early legislation, fostered by the wealthy factory owner and parliamentarian Robert Peel, encouraged better conditions for children in factories, as well as preventing apprentices under 21 to work longer than 12 hour shifts.

The first major inroad into improving conditions was the 1833 Factory Act. The Factory Act forbade any factory owner from working children under the age of 16 longer than ten hours per day. In addition, children under the age of 13 were to receive at least two hours of education each day. Most importantly, the Factory Act was the first parliamentary measure to provide for factory inspectors to roam the British cities and factories, ensuring that factory owners complied.

After the Factory Act, legislation continued to moderately improve the working conditions of the working poor, especially children. In the 1840s, legislation that forced factory owners to fence off dangerous machinery was enforced and the hours children were allowed to work was reduced and their required educational periods enlarged. By 1891, British Parliament had outlawed all labor by children under the age of 11 and required most children to at least attend primary school.

Working conditions and child labor was not the only focus of reform in 19th-century Britain. Indeed, even though the conditions of the working class were deplorable by modern standards, the wages the factories paid created an entirely new class of people - a class who now wanted a say in the political process from which they had long been shut off.

In early 19-century England, only men who owned land with a value of at least 40 shilling per annum were allowed to vote - about two percent of the population. It was a system that not only favored the wealthy but was based on the agrarian society of England's past without any caveats being made for the industrial centers. Additionally, many voting districts were hopelessly out of date, failing to keep pace with the changing demographics of England during the Industrial Revolution.

For example, one voting borough in Wiltshire in the southwest of England had only one male eligible to vote, yet sent two representatives to Parliament. Meanwhile, in Lancashire, several huge industrial metropolises, like Manchester, Bolton, and Oldham, were all represented by only two MPs. Calls for change were initially rebuked and political demonstrations were violently put down. However, these shows of violence, such as the Peterloo Massacre, galvanized those calling for change.

In 1832, these protesters got their change as several boroughs were redrawn and the vote was given to petty male landowners and tenants as well. As a result, the electorate nearly doubled overnight. Piecemeal measures throughout the century continued to expand voting rights until 1884, when effectively every British male possessed the right to vote for their representative in Parliament.

Economically, 19th-century Britain slowly embraced laissez-faire capitalism. This is perhaps best exemplified by the Corn Laws. The Corn Laws were enacted soon after Napoleon's fall in order to protect British grain and corn producers. During the Napoleonic Wars, Britain had been unable to access grain and corn from the European continent, and British producers feared that with the defeat of Napoleon, cheap European grain would flood Britain and ruin British producers. In response, the Corn Laws imposed artificially high tariffs on imported European grain.

While this safeguarded British corn producers from financial ruin, it caused corn and grain prices within England to skyrocket. The working and agricultural poor, who were already living hand-to-mouth, were increasingly unable to buy even the basic staples to feed their families. In the 1840s, faced with substantial opposition from both the working poor and intellectuals who embraced greater free market economics, the British Parliament repealed the Corn Laws.

The 19th-century was an important period of growth and reform in Great Britain. The greatest engine of social change in modern history, the Industrial Revolution, changed the demographics and economic face of Great Britain. Britons and the British Parliament alike responded to the changing circumstances.

The urbanization and unchecked growth of factories caused an enormous amount of social problems, as burgeoning cities of squalor housed families and children who were worked to the bone. In response, the British Parliament curbed child labor and enforced basic educational standards, which increased in quantity and quality over the century.

Additionally, the new classes clamored for greater access to the British political system. Though they were initially met with opposition, before the end of the century, Great Britain had given every man in the country the right to vote (though women, it should be noted, were still left entirely out of the process). Finally, as the British Parliament placed greater restrictions on its factories, it simultaneously removed restrictions from its economy as it embraced the growing global market.

Once this lesson is over, you should be able to:

The Working-Class During the Industrial Revolution: Growth & Ideologies

French-British Rivalry in the American Colonies

The Colonization of Africa & the Berlin Conference: Definition & Purpose