Allison has a Masters of Arts in Political Science. She has worked in the customer service and food industry since 2013.

Discover the profound effect that political factors have on a country's economic development. Explore the effects of regime type, political stability, political management, level of corruption, and trade laws on economic stability and growth. Updated: 12/28/2021
Create an account

How a country operates can have a dramatic impact on the development within a country. The government-enforced policies and administrative norms known as political factors can influence economic development, which is the process that increases standard of living by moving away from traditional farming cultures to industrialized societies.

In general, political factors influence economic development by supporting or disrupting the process of development. 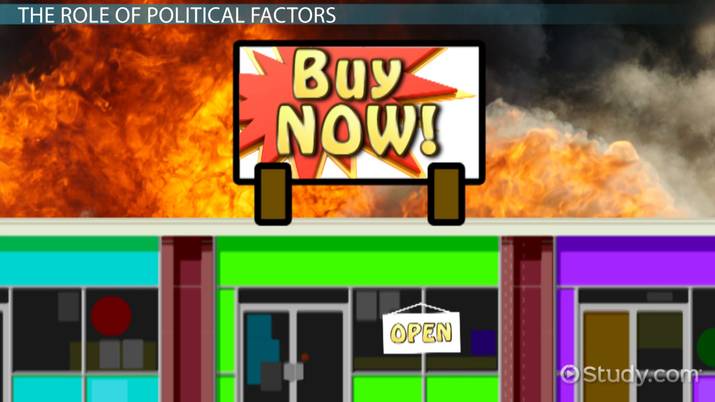 Try it now
Back
Coming up next: What Is Foreign Direct Investment? - Definition, Advantages & Disadvantages

The Role of Political Factors

Political factors that tend to have an important impact on economic development include:

Regime type is the form of government within a country. This includes whether a country is democratic, authoritarian, communist, or other. The regime type influences the policies that affect personal and public economic development. For example, in a democratic nation, people are able to obtain small business loans and start their own company. The business is able to expand exponentially and pay employees different rates depending on the work they are doing. However, in a communist nation, there are strict regulations such as paying all staff equally, which can impact how businesses operate and prevent growth that would increase economic development.

Political stability, or instability, refers to the reliability and durability of a government's structures. The more stable a political system is, the less risk a business operating in that country will face. Nations where there is a high risk of terrorism or internal conflicts are less stable. This makes opening and operating a business expensive and risky in the region. When a country goes to war, this decreases business and it can harm the quality of the currency exchange rate, or the amount the country's money is worth when compared to that of other nations. Thus, less stable systems are less likely to see an increase in economic development because they are risky to operate in.

Political management refers to how well the government monitors and enforces national and international policies or laws. Countries where copyright and piracy laws are not enforced are less desirable for businesses to operate in. Failure to enforce copyright or piracy laws means that a company may not make money and, in turn, this increases the risk of operating in the region. For example, a company that wants to sell music may change their mind because this won't be profitable. Everyone will illegally download the music for free.

Level of corruption identifies the level of dishonest, unethical, and illegal practices that are imposed on people and businesses operating in a region. Corruption can include bribing politicians, bribing local companies for materials, or paying to prevent competitors from entering the market. Imagine that a company pays the government to keep a competitor out. This prevents further economic development and can cause a monopoly that makes services overly expensive.

Trade laws are the local and international policies that impact the importation or exportation of goods. Trade laws are a political factor because governments and politicians develop the policies regarding trade. Trade includes tariffs, or fees and taxes imposed on certain imports and exports. Some trade deals between countries can reduce trade tariffs. However, this often occurs between two developed nations, and undeveloped or developing economies face high taxes that can prevent them from participating in international trade.

How Political & Economic Change Influence Each Other