The Enlightenment in Europe saw values of tradition being replaced by values of individualism, and gave birth to a range of new political thinkers. Learn more about the scholars and philosophers of the era, their ideologies, and their contributions to political philosophy. Updated: 11/04/2021
Create an account

I wish that whenever I had a great idea, there was actually a light bulb that appeared over my head. I always picture philosophers this way, with little light bulbs flashing over their heads. This is especially true of one series of philosophers who had so many great ideas that the light bulbs must have been constantly shining. Maybe that's why they called themselves 'enlightened.'

The Enlightenment was a philosophical movement from roughly 1650 to roughly 1780 that stressed reason and individualism over the values of tradition. This period was defined by a prominent intellectual culture, supported by the spread of printing technology. The thinkers of the Enlightenment gathered in coffee houses and other public places to debate and discuss their theories about government, science, and morality. 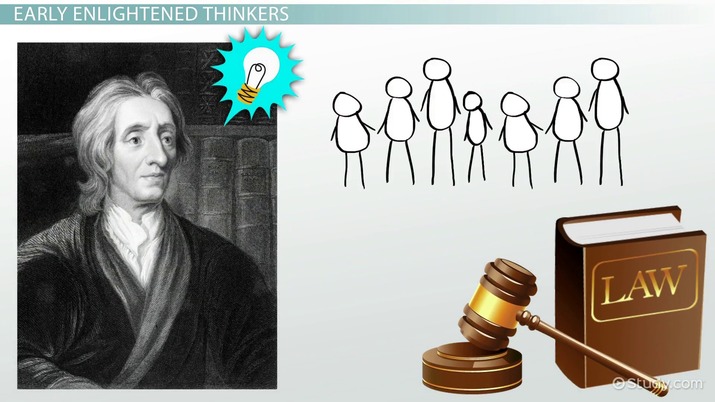 Coming up next: Science During the Enlightenment Period: Innovations, Discoveries & Major Figures

One of the first major political thinkers of the Enlightenment was René Descartes, a French philosopher in the 17th century. Like many enlightened thinkers, he was an accomplished mathematician and scientist, relying on scientific experiments to produce accurate data about the world. In philosophy, Descartes helped establish the idea of rationalism, which is the idea that truths are found through logic and intellectual reasoning.

Descartes laid several foundational principles through his books Discourse on the Method and Principles of Philosophy, but perhaps his most famous is this: 'I think, therefore I am.' This is one of the founding principles of Western philosophy that means, in essence, that the ability to question our existence proves that both thought and existence are real. Existence is the most basic truth, upon which all other truths can be built.

Another major thinker of the time was John Locke, an English philosopher of the 17th century. Locke was much more focused on political philosophy, especially the nature of the relationship between the government and the people. Locke examined the social contract, an Enlightenment theory that individuals create government by agreeing to give up some freedoms in exchange for the protection of other freedoms.

Locke argued that people were born inherently equal and independent, but that they formed society in order to create impartial governments that could resolve conflicts in a civil, non-biased way. To Locke, the government existed to protect the rights of the people, and the government was only legitimate because the people trusted it to protect their freedoms.

In the 18th century, the French philosopher Francois-Marie Arouet rose to prominence under the pen name Voltaire. Voltaire became one of the most versatile writers of his day, composing works of history, fiction, poetry, and satire. He used his pen to advocate for the individual rights that enlightened thinkers promoted. Most notably, these included the freedom of religion and freedom of speech.

Another 18th century philosopher was the German writer Immanuel Kant. Kant stressed the individualism of the Enlightenment in political terms, focusing on individual rights. To Kant, the way to create lasting peace was to restructure governments as constitutional republics, where elected officials govern over a nation within the legal powers given by a constitution. To Kant, this system protected the rights of the people above all else and secured global, lasting peace.

In keeping with those values of individual rights, the Scottish philosopher Adam Smith brought economics into enlightened philosophy. Smith was a major proponent of free markets and laissez-faire economics, which means 'to leave,' or more to the point, very little government regulation. In essence, the government keeps its hands off. Smith also proposed the idea that the efforts of individuals to help themselves often end up helping society, referred to as the idea of the invisible hand. Both of these policies display his belief that the government needed to give the people more freedom and less regulation.

The Enlightenment was a philosophical movement from roughly 1650 to roughly 1780 that stressed reason and individualism over the values of tradition. Enlightened philosophers generally focused on the individual nature of people in society. Several prominent philosophers and their ideas emerged during this time, including those of René Descartes, John Locke, Voltaire, Immanuel Kant, and Adam Smith. With every light bulb that went off over their heads, these enlightened thinkers set the foundations for many of our modern beliefs about morals, politics, and society.

After you finish this lesson, you are equipped to:

The Counter-Reformation: How the Catholic Church Revived

Influence of the Enlightenment on Democratic Thought

Europe After Napoleon: Restoration & the Balance of Power

The Roots of the Enlightenment